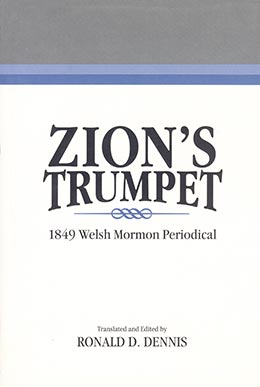 Soon after receiving a doctorate in Brazilian history and Portuguese from the University of Wisconsin, Professor Ronald Dennis decided to investigate further not just the life and work of his eminent Mormon forebear Captain Dan Jones but also the language and society of the Captain’s homeland, Cymru—Wales. Since then Professor Dennis has made himself the leading authority on the history of the Latter-day Saints’ earliest Welsh mission, which began during the years 1840–43. His scholarship and mastery of Welsh have enabled him to transform single-handedly one of the most neglected aspects of Welsh, and possibly Mormon, history into a veritable library of knowledge. Both Welsh and Mormon scholarship are in his debt for the wealth of information and insight he has provided during the years since he first set out to master Welch as the necessary means of getting to know from within the leading and lesser characters of the early Welsh mission, their triumphs and tribulations.

This new work continues the already impressive history of Professor Dennis’s scholarship. He has contributed many articles and chapters to numerous learned journals and volumes. In 1994 he produced a most accomplished biography of Abel Evans, until then one of the unsung stalwarts of the early Welsh mission; and he has already contributed three substantial volumes on important aspects of the mission to the Specialized Monograph Series of the Religious Studies Center at Brigham Young University, Provo, Utah. The first, The Call of Zion: the Story of the First Welsh Mormon Emigration (1987), it is a model of comprehensiveness and clarity. It was followed by Welsh Mormon Writings from 1844 to 1862: a Historical Bibliography (1988), which was encyclopedic in its thoroughness and detail. It will long remain a commanding work of reference to anyone remotely concerned with the early history of the Church of Jesus Christ of Latter-day Saints in Wales or, indeed, in a wider European context.

In 1997 Professor Dennis contributed a tenth volume to the Specialized Monograph Series with a monumental work entitled Prophet of the Jubilee was published. This “facsimile translation” of the first-ever journal of the Welsh mission, Prophwyd y Jubili, produced between July 1846 and December 1848, is an impressive, erudite work, particularly bearing in mind that the original is composed in a densely-printed and sometimes highly stylized, even deliberately archaic, mid-nineteenth-century version of the language.

This new volume, Zion’s Trumpet, is really a sequel to his work on the Prophet of the Jubilee. It too is a “facsimile translation” of the second Welsh Mormon journal, Udgorn Seion (which succeeded the Prophwyd in January 1849 and ran until April 1862). The skill and scholarship Professor Dennis brings to bear in this new work will quickly become evident to all who turn its pages. Its appearance puts those whose prime interests are either the early history of the Church of Jesus Christ of Latter-day Saints or the history of nineteenth-century Wales in all its complexity even further in debt to the scholarly achievements of this fifth-generation Welsh-American (if we may be allowed to repatriate him).

There has long been in Wales a small number of scholars who, though not themselves Latter-day Saints, have maintained an abiding interest in the vicissitudes of the Mormon faith in their homeland as well as amongst Welsh emigrants to America. The names of Professors David Williams, Bob Owen (Croesor), T. H. Lewis, Douglas Davies, Geraint Bowen, and Huw Walters spring to mind. If I have any place alongside these, however slight, it is due to an association with Professor Dennis.

Since coming to know Ron Dennis in about 1984, it has been my privilege on a number of occasions to be able to proffer him some limited assistance on minor points of language or research touching upon the history of the Saints in the Merthyr Tydfil and Aberdare districts in the mid-nineteenth-century. It hardly needs saying that I have gained far more from this association than he ever stood to gain by it. He was, for example, instrumental in securing for me an invitation to deliver a paper on the life of David Bevan Jones (an especially colourful and controversial figure in the early Welsh mission) to the Mormon History Association at Oxford in 1987, during the sesquicentennial celebrations of the Church in the British Isles. Through him I have gleaned more about the history of the initial Welsh mission than would otherwise have been possible, and I have had access to LDS source material and contacts at home and in America which would otherwise have been unobtainable.

It is an honour to have been asked to provide a foreword to Ron Dennis’ new work. This latest volume is in every way as remarkable and impressive an achievement as those which have preceded it, and it leaves one with the same sense of awe one felt at their publication.