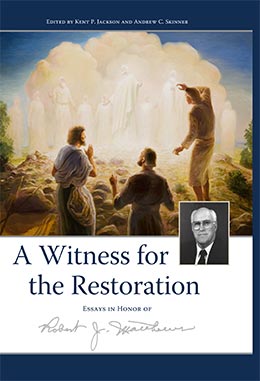 For more than half a century, Robert J. Matthews has mentored students and colleagues alike at Brigham Young University and in the Church Educational System of The Church of Jesus Christ of Latter-day Saints. He has filled many roles in the discharge of his professional responsibilities—classroom teacher, scholar, curriculum editor, professor, administrator, and friend—all to the end of building the kingdom of God. And he has done so possessing an attitude of selflessness.

Because he has influenced generations of students, teachers, and fellow scholars, it is appropriate that a collection of scholarly essays has been commissioned in his honor. His colleagues have contributed to this volume as a tribute to him and to honor him on his eightieth birthday.

Robert J. Matthews was born in Evanston, Wyoming, in 1926 to stalwart Latter-day Saint parents. A pivotal moment in his life occurred in July 1944 when he first heard Elder Joseph Fielding Smith refer to the Prophet Joseph Smith’s inspired translation of the Bible during a KSL radio broadcast. He felt the promptings of the Lord’s Spirit to look into the subject more, to acquire a copy of the Inspired Version, and to begin a lifelong study of the work. After graduating from Brigham Young University, he completed a master’s degree there, writing a thesis entitled “A Study of the Doctrinal Significance of Certain Textual Changes Made by the Prophet Joseph Smith in the Four Gospels of the Inspired Version of the New Testament” (1960). He went on to obtain a PhD at BYU (1968), writing a dissertation on the Joseph Smith Translation which formed the core of what was published subsequently as “A Plainer Translation”: Joseph Smith’s Translation of the Bible—A History and Commentary (Provo, UT: Brigham Young University Press, 1975). For many years, this book was a standard against which almost all other publications on the subject of the Joseph Smith Translation were checked.

Brother Matthews began his professional career as a seminary teacher in Wyoming and Idaho. He then worked with the institutes of religion in California and later came back to BYU as a curriculum editor for the seminaries and institutes of religion. He was invited to join the religion faculty of BYU, where he served as chair of the Department of Ancient Scripture (1975–81) and as dean of Religious Education (1981–90). In 1990 he was released as dean in order to devote his time and attention to the production of the Encyclopedia of Mormonism (New York: Macmillan, 1991), serving as one of the project’s senior editors. Professor Matthews is a scholar of tremendous capacity, voluminous output, and exacting standards. He has authored seven books, six booklets or pamphlets, and almost two hundred articles, in addition to two edited volumes, seven study aids, and a dozen unpublished papers (see “Writings of Robert J. Matthews” in this volume). Many of these have become reference works consulted by teachers in the Church Educational System or religion faculties at Church-sponsored universities.

Brother Matthews’s profound knowledge of the standard works, the doctrines of the gospel of Jesus Christ, and the history of the Restoration were put to good use when he was called to work with members of the Scriptures Publication Committee of the Church (primarily Elders Thomas S. Monson, Boyd K. Packer, and Bruce R. McConkie) in overseeing the production of the new LDS edition of the King James Version of the Bible in 1979 and the new editions of the Book of Mormon, the Doctrine and Covenants, and the Pearl of Great Price in 1981.

In addition to his signal contributions to the study and understanding of LDS doctrine and history, Robert Matthews has served the Church with the same devotion and energy he brought to his professional life. He has been a bishop, a stake president, a member of committees in Church Correlation, and a stake patriarch. He was called as the first president of the Mount Timpanogos Temple and has continued serving there as a sealer since his release. But impressive as all these accomplishments are, he is best known among those of us who have had the privilege of being his colleagues for his unwavering devotion to Jesus Christ and the mission of the Prophet Joseph Smith, his commitment to following the living prophets, and his kind and gentle way of encouraging all his friends and associates to go and do likewise. He is indeed a true disciple of his Savior and a witness for the Restoration of the gospel.

Thus, it may be justly said that the wide-ranging essays that follow are, in a way, a reflection of the varied interests and academic loves of Robert Matthews. They encompass an interesting and impressive orbit of topics, from ancient languages to Church history, from Greek word studies that inform our understanding of the Atonement of Christ to questions about religious tolerance in view of the Lord’s words uttered during the First Vision. But a common thread running through these scholarly presentations is that those who have contributed have felt it an honor and privilege to do so. This volume has been created for no other purpose than for his associates in Religious Education at Brigham Young University to pay tribute to Brother Matthews. The essays have been composed by current and past members of the university’s religion faculty. The only exception is Oscar W. McConkie Jr., whose father, Oscar W. McConkie Sr., was Brother Matthews’s mission president many years ago and whose brother, Elder Bruce R. McConkie, worked closely with Robert Matthews on several Church projects.

To all who have contributed to this volume, we thank you. To all who will read the essays that follow, we hope you will enjoy what is written and equate the insights of the individual authors with the kind of foundational mentoring done by our friend and colleague, Robert J. Matthews.