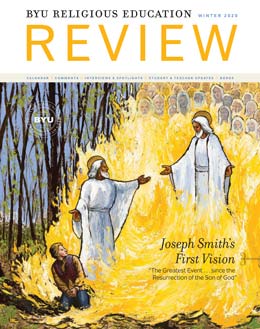 Joseph Smith’s First Vision: “The Greatest Event . . . since the Resurrection of the Son of God”

Scott C. Esplin (scott_esplin@byu.edu) was the publications director of the BYU Religious Studies Center when this was published. 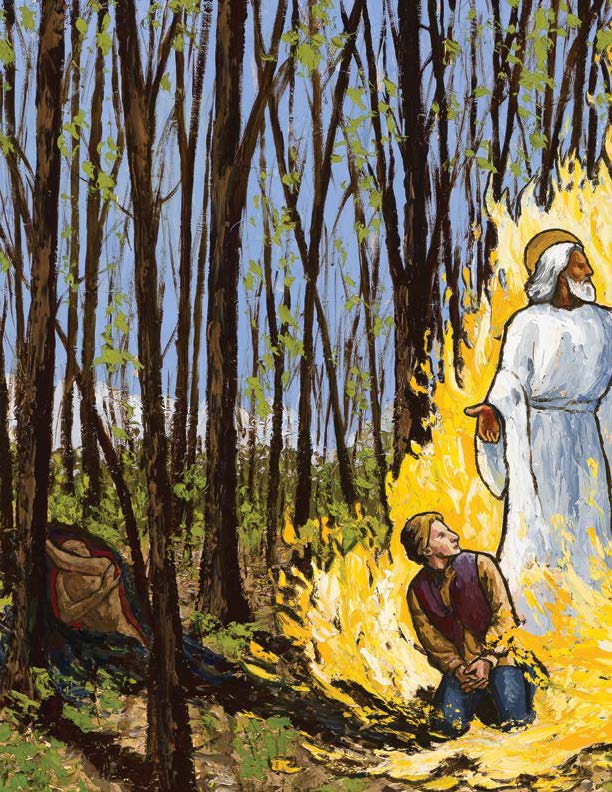 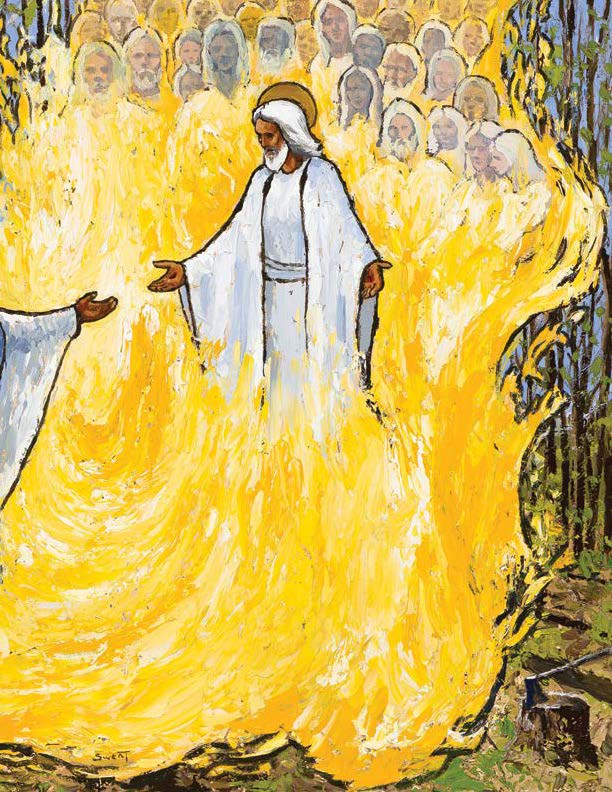 President Russell M. Nelson concluded the October 2019 general conference with these words: “In the springtime of the year 2020, it will be exactly 200 years since Joseph Smith experienced the theophany that we know as the First Vision. God the Father and His Beloved Son, Jesus Christ, appeared to Joseph, a 14-year-old youth. That event marked the onset of the Restoration of the gospel of Jesus Christ in its fulness, precisely as foretold in the Holy Bible.” Electrifying the conference audience, he continued, “The year 2020 will be designated as a bicentennial year. General conference next April will be different from any previous conference.” He charged Church members, “In the next six months, I hope that every member and every family will prepare for a unique conference that will commemorate the very foundations of the restored gospel.”[1]

President Nelson suggested several ways members might commemorate the Restoration, including deepening their study of the First Vision and the Book of Mormon. Religious Education at BYU has been actively working to meet the challenge, preparing materials to enrich a churchwide celebration of these foundational events. Today’s professors build upon the legacies of earlier religious educators such as Milton V. Backman, Larry C. Porter, Richard L. Anderson, and others who conducted pathbreaking research on the First Vision. The products of this latest labor take many forms, including scholarly monographs, conferences, podcasts, and art, which we are pleased to celebrate in this issue.

Over the last several months, religious educators at BYU have prepared three new books on Joseph Smith’s First Vision. In 2019, Dr. Steven C. Harper produced a seminal work, First Vision: Memory and Mormon Origins, published by Oxford University Press. First Vision “charts substantial new historiographical territory,” being the product of his work as a volume editor with The Joseph Smith Papers, a lead history editor of Saints: The Story of The Church of Jesus Christ in the Latter Days, and a researcher on Joseph Smith for more than a decade at BYU. In the words of Dr. Harper, the book First Vision “aims the light of memory studies, amassed over the past century, at Joseph Smith’s narratives, as well as the secondary accounts of his vision and the rich historical record surrounding their compositions. In a way,” Harper concludes, “this book is a travel narrative—the travel of memory through time—telling the odyssey of Smith’s vision from its obscure origins to its current situation as the genesis of The Church of Jesus Christ of Latter-day Saints.”[2]

While the book does explore the Prophet’s four primary accounts of his vision, the bulk of Harper’s work examines how it has become part of Latter-day Saint collective and even contested memory. “The goal,” Harper writes, “is to explain how [Joseph Smith] remembered his first vision, how others have remembered it, and what difference those memories have made over time.”[3] David F. Holland, a history professor at the Harvard Divinity School, lauds praise on the product: “As the biography of a theophany, this book beautifully narrates the long, complicated life of Joseph Smith’s First Vision in the history, theology, and culture of the Latter-day Saints. . . . Steven Harper has accomplished a remarkable thing.”[4]

A second book is Kerry M. Muhlestein’s “I Saw the Lord”: Joseph’s First Vision Combined from Nine Accounts, published by Deseret Book. “Joseph Smith’s First Vision is the best documented vision of God in the history of the world,” Dr. Muhlestein asserts. “Yet, because the details of the vision are spread over nine different accounts, . . . many people do not know all they could about this remarkable and world-changing experience.”[5] “I Saw the Lord” harmonizes the four primary accounts of Joseph Smith’s vision with five secondary versions, allowing readers to “come to understand the vision more fully than is possible without wading through each account separately and laboriously, trying to harmonize them.” Dr. Muhlestein concludes, “This retelling of the vision presents it in its fullness, allowing the reader to take in all the glorious and edifying details of the event that are available from the first- and secondhand sources.”[6] 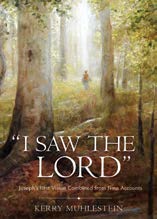 Organized around the themes of seeking, asking, finding, and learning, “I Saw the Lord” presents a narrative approach to the First Vision for a general reader, with rich appendices that examine each account in greater detail. “This is as seminal an event as any that has ever happened, except for the birth, ministry, death, and Resurrection of Jesus Christ,” Muhlestein maintains. “It is my hope that this book will help raise our appreciation for the First Vision, will provide opportunity for the Spirit to strengthen our testimonies of that vision, and will increase our ability to share and bear testimony of it ourselves.”[7]

Slated for release this spring is 1820: Dawning of the Restoration, by Richard E. Bennett. The book, copublished by the BYU Religious Studies Center and Deseret Book, contextualizes Joseph Smith’s vision and the restoration it initiated within a global setting. Seeking to capture “the qualities and essential meanings of the age,” Bennett’s work explores what he calls the “four dominant constellations in the skies of early nineteenth-century history,” namely revolution and reform, Romanticism, emancipation and independence, and religious revivalism. From Napoléon to Beethoven to Bolívar, Dawning of the Restoration portrays a biographical examination of “‘the year of our Lord 1820,’ as every almanac spoke of it,” as it “broke upon a weary world that was cautiously seeking new hopes, new dreams, and bold new visions—including Joseph Smith’s.”[8] 1820: Dawning of the Restoration is the subject of the “Research Update” section of this issue of the BYU Religious Education Review.

Religious Education is also pleased to partner with the Church History Department to host a special Church History Symposium commemorating the First Vision and the Restoration. “Visions and Visionaries: Joseph Smith in Comparative Contexts” will be held 12–13 March 2020. Thursday sessions (12 March) will convene at Brigham Young University and include keynote addresses by Sheri Dew, CEO of Deseret Book Company and former counselor in the Relief Society General Presidency, and Richard Lyman Bushman, professor and biographer of Joseph Smith. Friday sessions (13 March) will be held at the Conference Center Theater in Salt Lake City and will feature a keynote address by President Dallin H. Oaks.

In January, Religious Education also partnered with the Huntington Library, Art Museum, and Botanical Gardens in San Marino, California, to study and celebrate the two hundredth anniversary of the First Vision. The Huntington Library, one of the premier research institutions in the world as well as a significant repository for Latter-day Saint historical documents, hosted a two-day conference titled “The First Vision of Joseph Smith Jr: 200 Years On.” Convened by Church history and doctrine professor Richard E. Bennett, presenters from the faculty of Religious Education joined with scholars from around the country to explore the meaning of the First Vision for Latter-day Saints and the larger religious community. The conference also examined the historicity, theological importance, and significance within American religious history of the First Vision. Papers from the conference will likely be published in a forthcoming special issue of the BYU Studies Quarterly.

In addition to traditional conference and print formats, twenty-first century students of the First Vision can learn more about this foundational event in Latter-day Saint history through modern media.

In January, the Church History Department released a six-episode podcast miniseries titled The First Vision: A Joseph Smith Papers Podcast. Produced in an engaging, long-form journalistic style, the series aims to tell the story of the First Vision for modern audiences seeking material in mediums other than print. Church History Department historian and project lead Spencer W. McBride explains, “The goal of the podcast is to re-create for listeners the world Joseph Smith knew in 1820, to provide a deeper context for the First Vision. We do this by drawing on the expertise of scholars who have spent years immersed in historical sources.” These scholars include Rachel Cope and Steven C. Harper of Religious Education, Christopher Jones of BYU’s History Department, Matthew C. Godfrey—managing historian of the Joseph Smith Papers Project and adjunct professor of Religious Education—and Brent Rogers, Robin Jensen, Jenny Lund, and Mark Staker—also of the Church History Department.

New insights coming from the podcast include a deeper discussion of the pressing questions of Joseph Smith’s soul that led to his seeking God, a discussion of the sensory experience in the grove itself, and ways Church members have come to visualize the experience. Intended for a general Church audience, each episode is approximately twenty minutes long and can be accessed through the Latter-day Saints Channel, Apple Podcasts, Google Play, and Spotify. McBride hopes “that through this podcast church members will hear a familiar story in a new way. [McBride thinks] they will better understand Joseph Smith, his First Vision, and the way that event influences their own faith and Christian discipleship.” 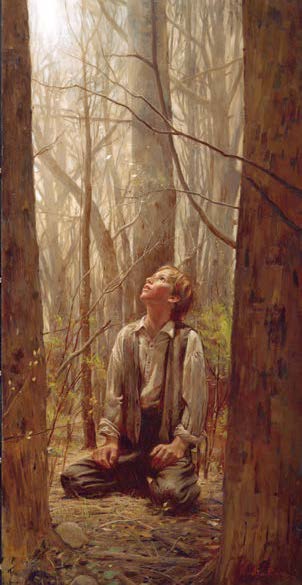 The Desires of My Heart, by Walter Rane © Intellectual Reserve, Inc.

Finally, Professor Anthony R. Sweat, a talented teacher and artist, combines both disciplines in his recent painting The First Visions, featured on the cover of this issue of the BYU Religious Education Review. Dr. Sweat couples his experience as a practicing artist and his familiarity with teaching the First Vision to thousands of students in order to harmonize the accounts in a way that both teaches and edifies. Professor Sweat’s original painting, as well as a wealth of information about the First Vision, is featured in an exhibit titled “‘A Pillar of Light’: Celebrating 200 Years of the First Vision,” curated by the L. Tom Perry Special Collections of the Harold B. Lee Library at Brigham Young University.

The First Visions “attempts to bring together into one image some aspects not typically depicted in other First Vision imagery,” Sweat asserts. Among other things, Sweat’s work captures nuanced details from the nine First Vision accounts. Dr. Sweat further explains, “In the 1835 account Joseph makes an important statement not often visually depicted. At the close of it he says, ‘and I saw many angels in this vision.’ Depicted above the Father and the Son are a gathering of many types of heavenly angels—female and male—divinely assembled to witness and testify. The vision was probably more expansive in scope than most assume,” Sweat concludes.

“Included in the scene is something not often directly shown,” Professor Sweat adds. In the corner of the painting is the adversary and his attendant darkness being “pushed away from Joseph by the pillar of flame.” Additionally, the first hints of spring are evident in the leaves, just beginning to burst forth. “Although we don’t know the month and day of the First Vision, the browns and greens suggest a grove getting ready to burst out of winter’s dark slumber, a fitting metaphor for the fruits of the First Vision itself.”[9]

President Joseph F. Smith remarked in 1917, “The greatest event that has ever occurred in the world, since the resurrection of the Son of God from the tomb and his ascension on high, was the coming of the Father and of the Son to that boy Joseph Smith.”[10] We join with the Church in celebrating this season.

However, all of this focus on the foundational events of the Restoration should do more than simply increase our knowledge. President M. Russell Ballard declared at a BYU devotional, “If anyone knows, I mean really knows, that Heavenly Father and his Beloved Son, Jesus Christ, appeared to and spoke to Joseph Smith as he said they did, the natural outcome of that knowledge should kindle a strong desire to serve God and his Holy Son all the days of his or her life.”[11] We hope we will all be the better for studying and commemorating the First Vision.