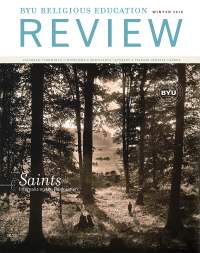 BARBARA MORGAN GARDNER (BARBARA_MORGAN@BYU.EDU) WAS AN ASSOCIATE PROFESSOR OF CHURCH HISTORY AND DOCTRINE AT BYU WHEN THIS WAS WRITTEN.

In Buenos Aires, forty-five intelligent, driven, humble, enthusiastic, spiritually sensitive young adult Latter-day Saints from all parts of South America gathered together with native and international business, political, medical, and Church leaders for the first annual Seminario Sud Americano (South American Seminar) on 23–26 September 2018. Focusing on the conference theme “Los Mormones in Sudamerica: Nuestra Religion en la Esfera Publica” (Mormons in South America: Our Religion in the Public Sphere), these participants spent four very full days listening, learning, analyzing, planning, and dialoguing on what they could do as members of the Church to be more effective in the public sphere.

This seminar had its inspiration in an earlier event held in Europe. Dr. Jim Faulconer, associate director of the Wheatley Institution and previous director of the BYU London Centre, was deeply aware of the isolation that young adult members of the Church living abroad experienced. What became known as the LDS EuroSeminar commenced and was deemed extremely successful.

As an observer of the EuroSeminar, Gabriel Saez an enthusiastic member of the Church in Argentina and an adviser to Argentina, vice president Gabriela Michetti knew immediately this was an opportunity he wanted the young adults in South America to have. “When I saw the experiences these European students were having, the quality of speakers, the interactions of the students, and the mentoring at the EuroSeminar, I immediately knew that this is something the young adults in South America needed,” he explained. Within a short time, Gabriel, with the assistance of Dr. Faulconer and Fred Axelgard senior fellow at the Wheatley Institution and previous EuroSeminar organizer began forming a committee for a similar seminar for Latter-day Saint young adults in South America. This committee included Gabriel Saez, Dr. Faulconer, Fred Axelgard, South America Area Seventy Alfredo Salas, and myself.

This organizing committee immediately began brainstorming what it would take to make this new dream a reality. Funding and official sponsorship were quickly and graciously provided by the Wheatley Foundation, BYU Religious Education, the Widtsoe Foundation, Grupo Roble, and the Stirling Foundation, which provided plane tickets, boarding, and other accommodations for participants from Argentina to Columbia and Brazil to Peru. With sponsorship, enthusiasm, networking, and leadership in place, planning and implementation became a reality.

The objectives of the Seminario Sud Americano were fourfold. The primary objective was to bring young Latter-day Saints together from all over South America to enable them to meet in an environment that combined academic rigor and sincere faith and to allow them to connect with other members their age who had similarly strong faith and desires to excel in their profession and make a difference in society. The second objective was to introduce these young adults to more senior Latter-day Saints who could model what it means to take one’s spiritual and moral values into professional and community or national settings. The third objective was to enhance their appreciation for their own heritage with the intention of building on the shoulders of others who had gone before. The fourth was to experience strength and understanding in the interfaith realm in order to reach a greater audience.

To meet the primary objective, we took great care to ensure the right participants were selected. For multiple reasons, including finances, timing, and desire to keep the seminar intimate, we determined that no more than forty-five young adults would be invited to attend. Within the first few weeks of the call for attendees, approximately four hundred Latter-day Saint young adults applied from every country in South America. The participants chosen from the applicants demonstrated faithfulness to the gospel, excelled in education or work, demonstrated a pattern and interest in civic and interfaith experiences, and were recommended by local ecclesiastical leaders. The forty-five chosen participants included professionals such as journalists, medical doctors, musicians, professors, artists, business administrators, teachers, nurses, politicians, and current students and graduates still making decisions about their future employment.

At the end of the seminar, the first objective seemed to have been met as many of the participants expressed delight in meeting other active and strong Latter-day Saint members their age who were interested in similar topics. Milton Montana from Columbia expressed, “I have felt alone for so long. This seminar has put me in contact not only with mentors and those older and more experienced, but also with members my own age, with similar drive, experience, and motivation. I feel renewed, motivated, and empowered. It’s so energizing to know that I am not alone.” Following the seminar, one student wrote, “To all of my new friends and companions, I am ready at any time to join you in your coming projects. I hope that together we can bring to fruition many important ideas. Thank you for your kindness, thoughtfulness, and enthusiasm. I love you all very much.”

To meet the second objective, men and women primarily Latter-day Saints from South America who successfully participated in politics, business, medicine, and education at local, national, and international levels were invited to present or participate as panelists throughout the seminar. Some of these local mentors included Romanna Remor, politician and BYU alum from Brazil; Charles Pimentel Martins, currently the CEO of Mundo Verde and an Area Seventy; Juan Manuel Lugones, attorney for the Government of the Province of Buenos Aires; Gustavo Marangoni, an Argentine politician and consultant; Carlos Aguerro, manager of the Argentina Missionary Training Center; María Crespo, director of the Buenos Aires office of the United Religions Initiative (URI); and many others.

Professionals from BYU and the United States were also asked to participate as speakers and panelists to bridge the gap between continents and validate the experience for participants. The speakers and panelists from the United States included Mauro Properzi, from BYU Religious Education; Warner Woodward, former BYU professor of organizational behavior; Ed Rowe, international attorney and alum of BYU and the University of Chicago; Jacob Renneker, acting director of the John A. Widtsoe Foundation and BYU alum; Larry Eastland, experienced entrepreneur and BYU alum; and Brian Adams, director of the Center for Interreligious and Cultural Dialogue at Griffith University, Australia, and BYU and; alum Jim Faulkner, Fred Axelgard, and myself, were part of the organizing committee and also spoke.

For the third objective, we met at 6:00 a.m. in a park near the center of Buenos Aires, where nearly a hundred years ago Elders Melvin J. Ballard and Rulon S. Wells dedicated the land of South America for the preaching of the gospel. Néstor Curbelo, a well-respected Latter-day Saint historian from Uraguay, met all participants and organizers at this sacred site. Standing in a circular formation, the participants listened reverently to each other as they read excerpts from Elder Ballard’s dedicatory prayer offered on Christmas morning of 1925. From Elder Ballard’s dedicatory prayer these students heard this plea, “Remember in mercy the ‘hope of Israel,’ the youth of the Church who have upon them the future, that they will remain clean and pure from the sins of the world, and that they can be found worthy of their inheritance, and arrive at their glorious destiny.”[1] Then, reading from Melvin J. Ballard’s original journal, participants were reminded of South America being part of the “Land of Zion.” One statement in particular from Elder Ballard dated 4 July 1926 and scribed in the notes of Vernon Sharp stood out to many participants. It read, “Work will go slowly for a time just as an oak grows slowly from an acorn. Not shoot up in a day like a sunflower that grows quickly and thus dies. Thousands will join here. Will be divided into more than one mission, and will be one of the strongest in the Church. The work here is the small[est] that it will ever be. [The] Day will come when the Lamanites here will get the chance. [The] South America Mission [is] to be a power in the Church.” As they stood there together, they recognized that the prayer of a faithful apostle had been answered, and his prophecy was literally fulfilled in them.

To meet the fourth objective, we recognized that timing was critical. We consciously timed the seminar to coincide and overlap with the G20 Interfaith Summit, planned and scheduled to be held in Buenos Aires the end of September. Thus, with permission granted by the G20 organizers, our Latter-day Saint seminar participants saw firsthand how leaders of the Church, including Elder D. Todd Christofferson of the Quorum of the Twelve Apostles and Sharon Eubank (first counselor in the Relief Society General Presidency), spoke and publicly interacted with other religious and political leaders in a more global and public atmosphere. This experience at the G20 Summit, especially watching the live interaction between Elder Christofferson and other religious and political leaders, proved to be a highlight for many participants of the seminar.

This overlap between the G20 Interfaith Summit and the seminar also provided the perfect window for a surprise visit and discussion with Elder Christofferson, which proved to be a great blessing for the participants, the majority of whom had never met, nor seen an Apostle firsthand. “Hearing Elder Christofferson speak in Spanish directly to us, such a small seemingly insignificant group, was very humbling and exhilarating,” Sandra Montilla from Columbia recalled. “The opportunity to shake hands with a prophet of God and have him here in our country was a highlight not only of the seminar, but of my life,” declared Sebastian Pawluk, a participant from Argentina currently serving as a bishop.

The seminar more than met the dreams and expectations of the organizers, sponsors, and participants. Following the seminar, participants shared sentiments, experiences, photographs, and posts on various social media sites. In addition to the repeated and heartfelt sentiments of gratitude were declarations such as “These were the most edifying days of my life,” “It’s going to take a lifetime for me to assimilate the immense emotion, revelation, and knowledge that I learned,” and “I look forward to returning to my country and applying what I have learned from all of you and especially from the Lord.” Another participant declared, “The windows of revelation were opened to me throughout this conference, and now I am ready to get to work!”

The Seminario Sud American 2018 succeeded in creating a place for spiritual and intellectual growth for young Latter-day Saints throughout South America. As organizers and presenters from BYU, we feel privileged not only to have been a part of the seminar but to have rubbed shoulders with and learned from these incredible young adults. We appreciate the sponsorship and donations of so many who made this seminar a success. The world truly is our campus!