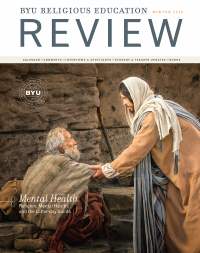 A New Age of Book of Mormon Study

Thomas A. Wayment (thomas_wayment@byu.edu) was publications director of the Religious Studies Center when this was published.

In the winter of 2017, Professors Nicholas Frederick, Michael MacKay, and Joseph Spencer set out with the support of Religious Education to sponsor and promote an academic conversation about the Book of Mormon that was both sensitive to faith and academically rigorous. They successfully organized an academic conference that was held at Utah State University and was titled “Book of Mormon Studies: Toward a Conversation.” Their work is intellectually indebted to a host of scholars from a variety of disciplines—Brant Gardner, Terryl Givens, Paul Gutjahr, Grand Hardy, and Royal Skousen among others—and it is genealogically connected to the work of the Religious Studies Center, Maxwell Institute, BYU Studies, and other campus and noncampus entities. In other words, the timing was right for an academic conversation to develop, there was a critical mass of scholars interested in the topic, and there was a hungry audience who felt that the Book of Mormon was ready for close academic scrutiny by an expanded group of participants and conversation partners.

Historically, the conversation about the Book of Mormon has been defined by extreme viewpoints, with defenders and detractors aligned in ways that permit little room for productive conversations to develop and with little hope of finding common ground. In one sense, the effort to invite scholars from all disciples and academic training—to summarize the call for papers that went out through bomstudies.com—could have failed miserably. Old battle lines could have emerged, believers could have found themselves staking their claims against the assaults of academics. But in the words of John G. Turner, one of the keynote speakers and author of Brigham Young: Pioneer Prophet (Harvard, MA: Belknap Press, 2012), “What interests me is the possibility of Latter-day Saints and others discussing the Book of Mormon together from a variety of perspectives, much the way that people of all backgrounds study the Bible and the Qur'an. Until recently, faithful Mormons and others have found little common ground when it comes to the Book of Mormon. For Latter-day Saints, it is an ancient record containing the fullness of the gospel. Non-Mormons have generally dismissed or mocked the Book of Mormon as a nineteenth-century creation, and a dull one at that. The text and its context are both fascinating, however.”

I think that it is a testament to the last several decades of increasing interest in the Book of Mormon among scholars and to the quality of training that Mormon scholars have received that allows this conversation to move forward in a positive direction. Those participating in the conversation, whether Latter-day Saint or otherwise, will benefit as new possibilities for collaboration emerge, as new lines of inquiry present themselves, and as new conversations take place. For one side, the Book of Mormon is a nineteenth-century uniquely American religious text that exists as a founding document for a new religious movement. For the other side, the text is a sacred, foundation document that reports the beliefs and experiences of Christ-believing Jews who lived the law of Moses with the intent that it would lead them to the Messiah-Savior. But, for so many, this has appeared to be the focus of the conversation, namely the question of whether the Book of Mormon is one or the other. Instead, the conversation can develop in ways that help both sides see how narratives are constructed, what genres of literature are employed in the book’s stories, how the Book of Mormon uses both Old and New Testament phraseology and sources, and how the book engages nineteenth-century American themes and practices.

The new group plans to hold an annual meeting, as per the vote of the group, and will continue to refine its organizational structure and build connections to already existing academic societies and conferences. The conference began with a review of recent and important books that had been published on the Book of Mormon by Latter-day Saints and members of other faiths. The conference then moved to traditional thirty-minute scholarly papers by noted academics, followed by audience responses. One attendee, Mark Ashurst-McGee, a noted scholar from the Joseph Smith Papers Project and an expert in early Mormonism, drew attention to some papers that were most influential: “I was impressed by the close literary readings offered by Kimberly M. Berkey on the book of Helaman and Kylie Nielson Turley on Alma’s hell. I was very interested in Daniel Gullotta’s paper on the golden plates, which was a response to the recent work of Ann Taves on the issue of the authenticity of the plates. I appreciated the paper by Jeremy Talmage showing that early Americans, including Joseph Smith, consistently described American Indians as red-skinned, not black-skinned (as in the Book of Mormon). Jared Hickman’s keynote address was a stunning tour de force of Book of Mormon interpretation.” After reading the titles of the papers, and doing interviews to prepare to write this article, I genuinely feel that I missed an opportunity by not being in attendance.

I look forward to the meeting that will be held in 2018 and which will be sponsored in part by Religious Education and the Religious Studies Center. It promises to bring together an impressive group of scholars who are interested in the Book of Mormon as a religious text. I hope that in the coming months, the committee that organized the first conference will find a way to get the papers in print or to produce a volume of papers that makes their work more accessible to a wider academic and interested audience. Their work has the look and feel of what Book of Mormon studies might become in the future. We are witnessing a new age of maturity with respect to the study of this important American religious document, and Latter-day Saint scholars have entered this conversation as welcome participants who remain committed to the sacred meaning of the text but who are also willing to ask probing questions of its contents.