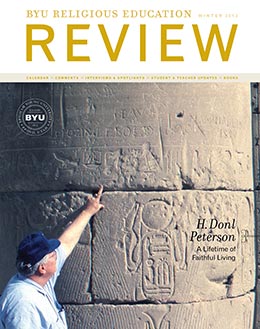 The "Mormon University" in Jerusalem

Kent P. Jackson (kent_jackson@byu.edu) was a professor of ancient scripture and associate director of the Brigham Young University Jerusalem Center for Near Eastern Studies when this was published.

Each morning, eighty BYU students wake up on the Mount of Olives—first to the Muslim call to prayer from a nearby mosque and then to their alarm clocks that signal the beginning of a new day. This has been the morning routine since March 1987, when students first moved into the Brigham Young University Jerusalem Center for Near Eastern Studies.

BYU’s Jerusalem study abroad program began in 1968, when a group of students spent a semester in the Holy Land. By the early 1970s, there was a group in Jerusalem almost every year, and a few years later, student programs were in Jerusalem year-round every year. This has continued to the present, with rare exceptions due to political problems—the First Gulf War led to a short-term suspension of the program in 1991, and the Second Intifada (Palestinian uprising) closed the program from 2000 through 2006. Now, in a time of political stability, the Jerusalem semester continues without interruption and is able to meet all its objectives successfully.

In the early days, the Jerusalem study abroad was housed in local hotels—accommodations that usually met needs but could hardly be described as luxurious. In time, it became obvious that BYU needed a permanent home.

The Jerusalem Center was designed by David Reznik of Jerusalem and Frank Ferguson of Salt Lake City, accomplished architects with long years of experience. In Jerusalem, Reznik is best known as the designer of the Hebrew University. Among Ferguson’s best-known structures are Abravanel Hall in Salt Lake City and the Tanner Building at BYU. For the Jerusalem Center, the two combined their talents to create one of the most beautiful and recognized buildings in the Holy City.

The site selected for the new building was a prominent piece of land on the north end of the Mount of Olives, with an unmatched view toward East Jerusalem and the Old City.

It was not easy for BYU to obtain the property and the necessary building permits. The land was in a politically sensitive location, and many soon realized that it was one of the best pieces of real estate in Jerusalem. Before construction could begin, a maze of approval processes had to be navigated through municipal review boards. In addition, BYU and the Church had to convince both friends and others that the center would not be used for missionary work. Through the approval process, the BYU building developed an unanticipated high profile. And along the way, it acquired the nickname “The Mormon University,” a name that has stuck to the center to the present time—not just in common usage but even on maps and street signs!

The Jerusalem Center is a self-contained university campus. The single building encloses classrooms, a large lecture hall, seminar rooms, a gymnasium, a cafeteria, a computer lab, a library, and student study areas. A beautiful auditorium is used only for special events, for concerts, and for weekly Church services (on Saturdays in Jerusalem). The center also houses dormitories for the students as well as apartments for four faculty families and three volunteer couples who help in the center’s operations. It is a building constantly abuzz with energy, learning, and conversation.

The center’s staff of about fifty people includes both Arabs and Israelis. The director of the center is an Israeli Jew; one associate director is an Arab Catholic, and the other is a Latter-day Saint BYU professor. The faculty is made up of professors on loan from Provo as well as local Israeli and Arab-Muslim instructors.

By design, the Jerusalem program exposes its students to different peoples and their different narratives. This approach is in harmony with the mandate the first Jerusalem study program received from President David O. McKay—that the program give equal treatment to the views and histories of both Israelis and Arabs. Thus the Jerusalem Center is politically safe and neutral territory in a city where differences often define people more than commonalities unite them. The result is that students return home with a deep appreciation for all the Holy Land’s Muslim, Christian, Jewish, and Arab cultures and peoples.

But relocating the family to teach in Jerusalem has its challenges. The Judds’ apartment is not as spacious or convenient as their Utah Valley home. They are away from family and familiar circumstances, their children’s school is not like what they are accustomed to, and Jerusalem is frankly not an easy city to live in. These downsides, however, don’t negate the positives that Frank and Jill find in their life in Jerusalem, particularly in working with a most remarkable group of BYU students.

To the students, the semester in Jerusalem is probably unlike anything else they’ll ever experience. For starters, they live in Jerusalem, one of the most famous cities in the world. They are surrounded on all sides by reminders of the city’s importance in both ancient and modern times. From the balcony that accompanies every student apartment, they can see the Dome of the Rock, one of the holiest places in all of Islam, and the Church of the Holy Sepulcher, the traditional heart of world Christianity. On an average walk through the city, they see evidence of ancient and modern Jewish culture as well as the handiwork of Romans, early Muslims, Arabs, Crusaders, Turks, and many others. And on the Mount of Olives, where the center is located, they see the sites of Jesus’ Triumphal Entry and his suffering at Gethsemane.

Jerusalem Center students take courses in ancient Near Eastern studies and in the Old and New Testaments. These are taught by BYU professors like Judd who come to the center on one-year appointments. Students also take Jewish history and culture from a local Israeli professor, and Palestinian history and culture from a local Palestinian professor. Each student also enrolls in either Arabic or Hebrew, taught by local Palestinian and Israeli instructors. These are one-credit courses that introduce the students as much to the local cultures as to the local languages. The course work at the Jerusalem Center is demanding, yet most students rise to the occasion and take advantage of its unique classroom opportunities.

Much learning takes place outside of the classroom as well. Each week, the students load into buses and go on field trips to sites that relate to the courses they are taking. Where possible, the field study is coordinated with the biblical texts the students are studying at the time in their classes. The sites themselves are remarkable. The Bethlehem field trip, for example, takes students to the luxury palace and burial place of Herod the Great, to locations believed to be where the angels appeared to shepherds to announce Jesus’ birth, and to the traditional location of that birth. Skilled BYU professors can teach as well in Provo as they can in Jerusalem, but the biblical field trips can’t be duplicated anywhere else.

In 2012, the BYU Jerusalem Center—“the Mormon University”—celebrated its twenty-fifth birthday. Now every semester the children of previous Jerusalem Center students are in attendance. And now almost every year, the center’s BYU faculty members include at least one who, like Frank Judd, was on the program as a student. These continuing trends point to a future for the Jerusalem Center as successful as its past.