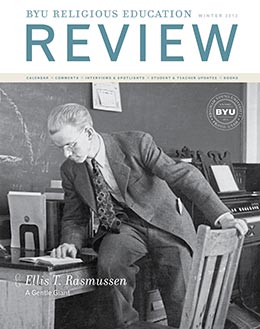 Excavating an Ancient Jewish Village Near the Sea of Galilee

Matthew J. Grey (matthew_grey@byu.edu) was an assistant professor of ancient scripture at BYU.

In June 2011, a team of archaeologists began excavating an ancient Jewish village, northwest of the Sea of Galilee, named Huqoq. This village had a long, if largely unnoticed, history that spanned from Old Testament to Ottoman times. Because of its history, its remote location, and the lack of previous excavations, the site of Huqoq promises to contain material that will help scholars better understand Galilean village life during the biblical and postbiblical periods. This potential inspired Dr. Jodi Magness—professor of early Judaism at the University of North Carolina at Chapel Hill—to organize the Huqoq Excavation Project, a consortium of universities comprised of UNC–CH, the University of Toronto, Wofford College, and the University of Oklahoma that will be excavating the village over the next six years. These excavations are codirected by Dr. Magness and Shua Kisilevitz of the Israel Antiquities Authority and include a staff of area supervisors (Dr. Chad Spigel of Trinity University and me); specialists on pottery, coins, animal bones, and other remains; and student volunteers. I am pleased to announce that beginning with the 2012 season, BYU will be joining the consortium. This involvement is made possible by a generous grant from BYU Religious Education.

Literary references and archaeological surveys provide a rough outline of Huqoq’s history. The earliest reference to the site is in Joshua 19:34, which lists “Hukkok” as a village apportioned to the tribe of Naphtali after the Israelite conquest of Canaan. (1 Chronicles 6:75 lists it as belonging to the tribe of Asher.) Although no remains predating the Hellenistic era have yet been found at the site, it is possible that future excavations will illuminate our understanding of its history during the Old Testament period.

Huqoq is not named in the New Testament, but several factors indicate that it was a Jewish agricultural village at the time of Jesus. Initial surveys of the site found pottery, tombs, agricultural installations—including wine and oil presses—and ritual baths from the Early Roman period, making it contemporary with the Gospels. Within view of the Sea of Galilee, it is located 3.2 miles to the west of Capernaum (the hometown of Peter and base for Jesus’ Galilean ministry) and 2.8 miles to the north of Migdal (the hometown of Mary Magdalene). This places Huqoq within walking distance of some of the most prominent locations in the life of Jesus and his earliest disciples. Although the Gospels do not explicitly mention Huqoq, it is reasonable to suggest that it was included in the statement “And Jesus went about all Galilee, teaching in their synagogues, and preaching the gospel of the kingdom” (Matthew 4:23).

Jewish village life at Huqoq flourished into the Late Roman and Byzantine periods. Rabbinic literature refers to the village’s agricultural activities (specifically its cultivation of mustard plants), and architectural fragments scattered on the surface indicate that a monumental synagogue once stood in its center. Following the Muslim conquest of Palestine in the seventh century AD, Huqoq became an Arab village (Yaquq) which was inhabited into the twentieth century. The Palestinian village was evacuated in 1948, stood abandoned for twenty years, and was bulldozed in 1968, leaving heaps of rubble on the surface. The village was not subsequently reinhabited, but an Israeli kibbutz was established nearby.

When the Huqoq Excavation Project began, the team outlined two main goals for its first season. One objective was to excavate the remains of the pre-1948 village of Yaquq that cover the ancient ruins. We are proud to be one of the first archaeological projects in Israel to carefully document the history of a modern Arab village of the nineteenth and twentieth centuries. During the first season, we excavated a room belonging to a pre-1948 house whose collapsed roof, charred roof beams, and contents provided a glimpse of Palestinian village life in the early twentieth century. Small finds from this and the earlier Ottoman period included clay pipes, sandals, coins, metal canisters, and a musket barrel with thirty-two lead bullets.

Our primary objective, however, was to identify the location of the ancient synagogue and associated dwellings as a way of better understanding ancient Jewish village life and religious worship in Galilee. Among the surface rubble were several limestone architectural fragments that once belonged to a monumental synagogue, most likely dating to the Late Roman period. Because these fragments were clustered at the center of the site, we believed that the synagogue building would be located below. The deeper we excavated in this area, the more evidence we found of a large public building nearby. Before long, we were finding roof tiles, loose pieces of a mosaic floor, ancient coins, and a fragment of a beautifully carved marble bowl imported from Greece or Asia Minor. As is typical in an archaeological excavation, the most exciting find came in the final days of the season—students digging in the area came upon two courses of massive building stones that belonged to the eastern wall of a monumental public building. Considering the impressive size of this wall and the small size of the village, we concluded that this wall belonged to the ancient synagogue for which we had been searching. By the end of the season, we also found a contemporary dwelling nearby. Needless to say, this newly discovered synagogue and the associated village will be a primary focus of our future excavations.

In addition to accomplishing these two goals, the first season of excavation at Huqoq also brought to light other aspects of the village’s history. For example, we excavated an ancient Jewish ritual bath (a miqveh) which may have been used from the first through fourth centuries AD, and explored an underground complex of tunnels and cisterns that was used by Jewish villagers for hiding during the First or Second Revolt against Rome. Ultimately, the first season of the Huqoq Excavation Project was a wonderful success. We look forward to future seasons of excavation in which we will continue to preserve modern Palestinian history, bring to light a Late Roman period synagogue, and better understand the dynamics of a Jewish village in Galilee during the time of Jesus’ ministry.