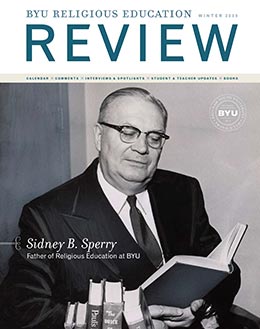 The Religious Studies Center (RSC) was established at Brigham Young University in 1975 by Jeffrey R. Holland to facilitate religious study and serve not only the university but the entire Church. To better achieve this vast undertaking, the Religious Studies Center Web site was developed recently. The site provides users with much helpful information, including a list of our most recent publications, past articles published by the RSC, detailed news, and upcoming conferences and workshops. At present, a team of student employees is compiling a complete file of every book, magazine, newsletter, and article produced by the RSC in its thirty-four-year history, which is being made available on a searchable database on the site.

The RSC is also developing some website features that are less common on other sites. For example, instead of having just an English version of the site, the RSC plans to include other versions of the site translated into different languages. The first two languages that are available now are Spanish and Portuguese. Each of these language sites will include similar information for those who speak these languages. Though these sites will not completely replicate the original English site, it will include articles that have been translated into the featured languages.

The RSC is also preparing audio versions of selected articles in an MP3 format for users to download and listen to. The first articles made available were recorded by students from Religious Education classes here on BYU campus. There will also be other audio versions narrated by the original authors of the articles, and still others read by professionals.

Besides the relevant and up-to-date information made available on the site, there are also links to RSC publications and projects. For instance, if you want to buy, review, or study our periodical publications, you can link to the BYU Religious Education Review, a semiannual magazine, or the Religious Educator, a journal-style periodical published three times per year, and browse the latest issue or issues dating all the way back to when the publication began.

The RSC also supports the Students of the Ancient Near East and their publication, Studia Antiqua. The RSC Web site has a link that connects users to their site. There, users will be able to access some of the back issues of Studia Antiqua and find other related news and information, including details for upcoming symposia.

The RSC is on the cutting edge of combining scholarship and technology and will continue striving to facilitate religious study and serve not only the university but the entire Church well into the future.