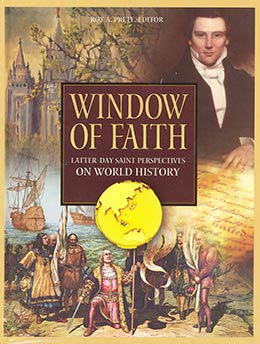 A Marvelous Work and a Wonder

If you started at the beginning of the volume, you have already read Elder Alexander B. Morrison’s lead article, “God in History,” which defines many of the issues for later discussion. Emphasizing the subjective nature of historical exploration, Elder Morrison has affirmed the role of God in history, but, urging humility on the part of the researcher, has cautioned against attributing either too much or too little to the divine influence. Principles that he has enunciated to aid the historian wishing to explore the role of God in human history include His love for all His children, the principles of agency and freedom, the concept of progress, the centrality of Christ in the divine plan, and the importance of prophets as a source in learning the divine will.

The chapters in part 1 discuss, in the faith tradition of the Latter-day Saints, overt ways in which God has intervened in history. Drawing on a vast erudition in both early Christian studies and those of the Restoration, John W. Welch lays the groundwork for the discussion of providential history in his chapter, “Early Mormonism and Early Christianity: Some Providential Similarities.” His chapter deals with the many analogous characteristics of the two settings, and compares the similarities of the two revelatory experiences, the subsequent apostolic ministries, and the growth patterns of the two new churches. The many similarities would suggest the role of the divine hand in preparing the way in the later unfolding of events.

In his chapter, “The Restoration in the Lord’s Plan,” Richard O. Cowan, a noted scholar of Latter-day Saint history in the twentieth century, carries the discussion one step further, placing the Restoration of the gospel in the context of previous cycles of apostasy and restoration. Tracing the events of the Restoration, he deals with the First Vision and Joseph Smith’s call as a prophet, the coming forth of the Book of Mormon, the restoration of the priesthood and the establishment of the Church of Christ in 1830. He then discusses the revelation of priesthood organization, the restoration of the sealing power and temple work, the construction of temples, the attempts to establish Zion, and the elaboration of Church structure and programs from the Joseph Smith era to the present. Unlike earlier dispensations, this one will not fall away but is intended to prepare the way for the millennial reign, which will complete the work of salvation on the earth.

In contrast to this glorious outcome, Richard E. Bennett, the foremost scholar of the Mormon exodus, and Amber J. Seidel explore, within the context of existing concepts in the Protestant world, the views of Joseph Smith and early missionaries on the Apostasy in the period up to 1834. In their chapter, “‘A World in Darkness’: Early Latter-day Understanding of the Apostasy,” they conclude that the Apostasy was seen not only as an apostasy from the Christian Church, with the corruption of doctrine, ordinances, and practices, but as an apostasy from the concept of Israel as the Lord’s covenant people. By 1834, Joseph Smith had come to believe that the Apostasy was far-reaching and pervasive, having invaded nearly every walk of life. The Restoration thus takes on new importance not only in the spiritual but in the secular regeneration of mankind. Against this conceptual backdrop, the quest for a new Zion society becomes much more significant.

After the martyrdom of Joseph Smith, a key element in the Saints’ pursuit of a such a society was the relocation under Brigham Young to the Rocky Mountains, a safe haven from which they could escape their persecutors and establish a secure base for taking the message of the gospel to all the world. In his chapter, “‘A Place Prepared’: Joseph, Brigham and the Quest for Promised Refuge in the West,” Ronald K. Esplin, a noted scholar of nineteenth-century Church history, has taken up the theme of the westward migration, which in the words of President Wilford Woodruff was “the main Key of the Mormon History of the nineteenth century.”[1] Esplin argues that under successive prophetic leaders, the Saints were more led than driven to the Rocky Mountains. The Church itself adapted to the prevailing cultural norms of America in the last quarter of the nineteenth century as it slowly prepared to take up its role as a worldwide church.[2]

As identified in scripture, one of the Lord’s great objectives in the era of the Restoration is to bring to pass the gathering of the house of Israel. The title page of the Book of Mormon defines the two great purposes of the book: “to show unto the remnant of the House of Israel what great things the Lord hath done for their fathers; and that they may know the covenants of the Lord, that they are not cast off forever—And also to the convincing of the Jew and Gentile that Jesus is the Christ, the Eternal God, manifesting himself unto all nations.” The Lord’s desire in the gathering of the long-dispersed remnants of the house of Israel is shown in numerous scriptures.[3] It is a vital part of His plan for the salvation of His children (see Jacob 5). Poetically, Isaiah explains: “For a small moment have I forsaken thee; but with great mercies will I gather thee. In a little wrath I hid my face from thee for a moment; but with everlasting kindness will I have mercy on thee, saith the Lord thy Redeemer” (Isaiah 54:7–8). The coming forth of the Book of Mormon is a sign that “the work of the Father hath already commenced unto the fulfilling of the covenant which he hath made unto the people who are of the house of Israel” (3 Nephi 21:7).

The scattering and gathering of the house of Israel thus becomes one of the main themes of modern history, a theme of which secular historians are only partially aware. Because the house of Israel has been scattered among all nations, its gathering is part of the “marvelous work and a wonder” of the last days (2 Nephi 25:17). The covenant relationship of Old Testament history is thus now blended with the history of the so-called Gentile nations, with the apparent result that God’s intervention in their affairs is more visible, in many instances, than in ages past. The chapter by Victor L. Ludlow, lifelong scholar of Hebrew and Arab studies, entitled “The Scattering and Gathering of Israel: God’s Covenant with Abraham Remembered through the Ages,” is thus a vital part of any attempt to understand God’s dealings with the whole of the human family in the modern period.

[2] See Thomas G. Alexander, Mormonism in Transition: A History of the Latter-day Saints, 1890–1930 (Urbana: University of Illinois, 1996), for the transformation in Church practices and policies that allowed it to fit better into the mainstream of American life.

[3] There are five and a half pages of references on the topic of Israel in the Topical Guide (232–38) of the Latter-day Saint edition of the Holy Bible.