The following outline of various aspects of the book should prove helpful in understanding its structure and content:

Each item is identified according to the following format:

1. Author. Of the fourteen authors identified, two—Dan Jones and John Davis—authored over 70 percent of the items.

4. Publication information. The information printed on each item is provided here in English.

5. Number of pages and size. The measurement in length is given, except in the case of the hymnals (items 7, 28, 56, and 70) and the register of members (item 34), for which the width is also indictated.

6. Wrappers. A description of the wrapper is given where applicable.

The “identification” for item 1 is given here as an example:

(3) (The dead raised to life: or the old religion anew. Treatise showing the immutability of the kingdom of God.)

Each of the 10 nonextant items is assigned a letter according to the date of its assumed appearance in print. Although integrated with the extant publications in the chronological listings of appendixes A and B to provide a “global look,” the discussions for these 10 items are placed together and follow those for the extant items.

Each of the 107 extant items is assigned a number according to its chronological order. The assigned number will always follow the Welsh titles as they are mentioned in the discussions.

The discussions vary in length and content; most, however, contain the following information:

1. Circumstances. Each item has its own birth process and story. Those with unusual circumstances surrounding their appearance are dealt with in greater detail.

2. Content description. Publications which contain historically significant information are given greater attention than those which are doctrinal in nature.

3. Precise publication date. Some of the items carry their own dates of publication. Most dates, however, have had to be determined from other sources. The determination process, where applicable, is discussed.

4. Previous printings. Some of the publications first appeared in one of the Welsh Mormon periodicals before being printed separately. These earlier printings are identified.

5. Price. Very few pamphlets were simply given away. The profit was often used to support missionaries, and in some cases the authors benefitted from sales of their publications. Not all items bear a price tag; many prices were determined from book lists printed in the periodicals or on the wrappers of certain pamphlets.

I have surveyed numerous book repositories in the United States and in Wales, searching for Welsh Mormon publications. Following the discussion of each item, I have indicated those repositories which house that item. A list of the repositories and their respective abbreviations is on page 12.

Of the 107 extant items, 79 are mentioned in Chad J. Flake’s A Mormon Bibliography, 1830-1930 (Salt Lake City: University of Utah Press, 1978). To facilitate referencing, the number given by Flake is listed herein following the discussion of each of the 79 items.

The Welsh title for any item being discussed is not translated. Whenever used in other discussions, however, the Welsh title is always translated and followed by its letter or number. Lengthy titles are often shortened for convenience.

Prophwyd y Jubili (Prophet of the Jubilee, item 5) and Udgorn Seion (Zion’s Trumpet, item 23), the two Welsh Mormon periodicals, are used with such great frequency that their English translations and item numbers will not be given from here on.

Quotations from documents in Welsh have been translated into English. All translations are mine.

Appendix A is a listing of all 117 items according to the following format:

1. The first column, according to the letters and numbers previously explained, integrates extant and nonextant items into one chronological listing.

2. The second column shows the year of publication to the side of the first item published in that year. The number of publications during 1850, for example, can easily be determined by counting all items from 1850 down to 1851.

3. The third column indicates the initials of the author of each item. Authors’ names are listed at the end of the appendix.

4. The fourth column shows the titles; these are often shortened. Those in brackets are supposed titles or descriptions.

5. The fifth column indicates the number of pages in each item, except for collections, periodicals, and nonextant items.

6. The sixth column indicates the content according to the following categories:

Appendix B contains the same information as Appendix A, except that the titles, often shortened, are given in English.

Appendix C is an alphabetical listing of all original titles that have been determined either by seeing the item itself or by finding a mention of it in the periodicals or book lists. If you have what you suspect is a Welsh Mormon publication, you can locate the discussion of that item by using this appendix. To facilitate use, the English language alphabetizing system has been used.

Appendix D contains the same information as Appendix A but with a chart showing which items are housed at each of the sixteen repositories.

Most of the illustrations interspersed throughout are wrappers or title pages for the extant items; a few are internal pages of particular significance. Those which are two-to-a-page have been reduced; the title page for item 34 and the fold-out page from item 69 have also been reduced. The other illustrations are located as follows:

I am indebted to several institutions which were kind enough to photograph their materials for inclusion in this book:

A number of places in Wales are mentioned in this volume. Most of these are indicated on a map located on the inside front and back covers. Two towns by the name of Llanelli arc on the map: one is in the old county of Breconshire and the other in the old county of Carmarthenshire. Mentioned in the text but not indicated on the map are Georgetown and Glebeland (areas of Merthyr Tydfil) and Nantygwenith (a street in Merthyr Tydfil). 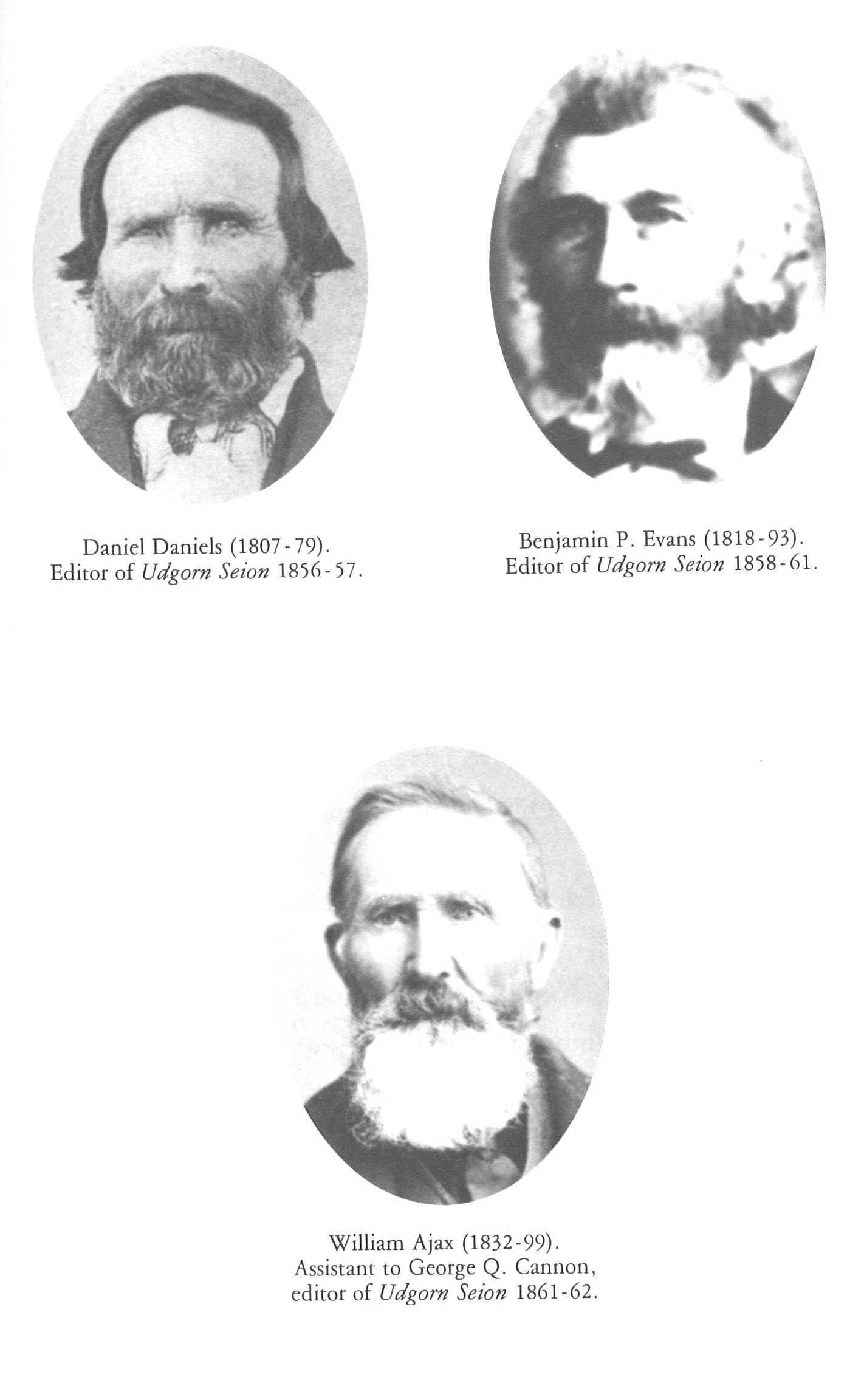