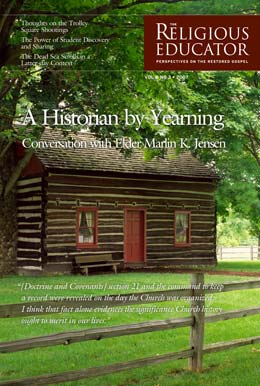 Sixty years ago, in 1947, two Ta’amireh shepherds climbed the limestone cliffs above the shores of the Dead Sea searching for a stray goat. One of the shepherds threw a rock into a cave, hoping to scare the goat from its hiding place. Instead the rock shattered something at the bottom of the cave. Mohammed edh-Dhib, a teenager, investigated the strange sound, thinking he may have come upon hidden treasure. But instead of gold or silver, he found ten clay jars. In one were some leather scrolls that he could not read. These scrolls and others found shortly thereafter ended up in the hands of an antiquities dealer in Bethlehem, and the rest is history. The young shepherd could never have realized at the time that his discovery would change the maps of scholarship as much as the Arab-Israeli conflict was changing the political maps of the region. In the end, the scrolls were a stunning treasure after all. To celebrate the sixtieth anniversary of the Dead Sea Scrolls discovery, I invited three colleagues to join me in a roundtable discussion on the significance and meaning of perhaps the most important archaeological discovery of the twentieth century. We are publishing the first installment in this issue, and will follow with the second in the first issue in 2008.

We turn our attention from ancient history to the history of the Church by providing an insightful interview with Elder Marlin K. Jensen, Church historian-recorder and member of the First Quorum of the Seventy. We follow up Elder Jensen’s interview with a thoughtful essay by Richard E. Bennett, professor of Church history and doctrine at BYU, “From Calvary to Cumorah: What Mormon History Means to Me.”

Elder Alexander B. Morrison ponders the improbability of life in a modern world where in a short few moment lives are lost and our sense of safety is shattered. He shares some general principles about life, death, and forgiveness after the February 2007 Trolley Square shooting in Salt Lake City.

We also include some other wonderful essays focused on teaching and, in particular, teaching the Old Testament, the CES curriculum for the academic year 2007–8.

Near the end of this issue we publish our first contribution from a scholar of another faith, a talk given at BYU by Philip Jenkins, distinguished professor of history and religious studies at Pennsylvania State University, looking to the future, “The Next Christendom: The Coming of Global Christianity.”

So there you have it—an issue dealing with the past, present, and future. Enjoy!