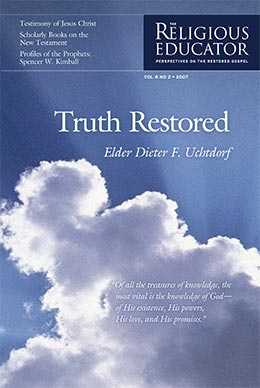 In this issue of the Religious Educator, we are pleased to publish several essays that are based on talks given at BYU in 2006, including Elder Dieter F. Uchtdorf’s thoughtful BYU Education Week devotional address, “Truth Restored.”

Each year about Easter time, the popular media turn attention to Jesus Christ, the New Testament, and the early Church. Last year, it was National Geographic’s report of a long-lost gospel, “The Gospel of Judas” (a Gnostic text that provides no historically reliable information about the Savior’s last days). This year, it was Discovery Channel’s The Lost Tomb of Jesus (a film that provides no new information about first-century Jewish burial practices but offers lots of unfounded speculation about Jesus’s supposed burial place). Such media hype often diminishes quickly, but the resultant attention provides faithful disciple-scholars an opportunity to think about “those things which are most surely believed among us, even as they delivered them unto us, which from the beginning were eyewitnesses, and ministers of the word” (Luke 1:1–2).

A few years ago, Professor Thomas A. Wayment and I organized an Easter conference to celebrate the life and ministry of Jesus Christ from both a scholarly perspective and a perspective of faith—beginning a dialogue about important issues in New Testament current scholarship and popular ideas about Jesus as presented in the media. The tradition continued, and this past year President Cecil O. Samuelson and Academic Vice President John S. Tanner offered two excellent talks at the Easter Conference, which we are pleased to include in this issue.

At the same conference, Joseph Fielding McConkie provided an intimate look at the context of his father’s last conference address. Like other significant historical moments, such as the assassination of John F. Kennedy (1963), Neil Armstrong’s first steps on the moon (1969), and the fall of the Berlin Wall (1989), Latter-day Saints living in 1985 will long remember Elder Bruce R. McConkie’s talk, “The Purifying Power of Gethsemane.” We are pleased to continue with our New Testament theme in this issue with an essay by Gaye Strathearn and Frank F. Judd Jr., one by Thomas A. Wayment, and one by Brian M. Hauglid, all of whom are professors at BYU.

Finally, at the request of the Religious Education Administrative Council, we include an edited version of my keynote address delivered in October 2006 at the thirty-fifth annual Sidney B. Sperry Symposium, “The Da Vinci Code, the Gospel of Judas, and Other Bad Ideas.” The above comments reflect merely a taste of what you will find inside the covers of this issue. Enjoy!