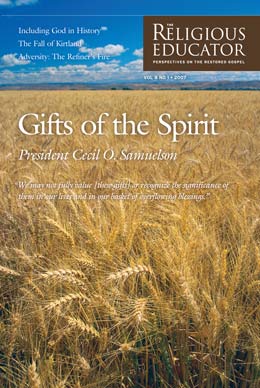 Wayne S. Young (wsyoung1@verizon.net) has a PhD in materials science and spent thirty-five years working for IBM and Hitachi GST

In the scriptures and in Church history, the Lord has sometimes asked His Saints to do something by difficult means, even when an easier way has been available. One such instance is the directive about river travel found in Doctrine and Covenants 61.

Section 61 cautioned Joseph Smith and the Saints against using the waters (the Mississippi, Ohio, and Missouri rivers) for travel between Kirtland and Zion. As a result, Zion’s Camp and groups of the Saints traveled overland by foot and wagon train instead of using the much easier flatboats and steamboats. At least one positive result was that the Saints were prepared in advance for the arduous wagon journeys from Missouri to Nauvoo, then across Iowa to Winter Quarters, and finally to the Rocky Mountains.

Joseph Smith arrived in Kirtland, Ohio, on about February 1, 1831, after directing all the members in New York to move there also. Less than six months later, as a result of revelations he received about Zion, Joseph took a party of brethren to Jackson County, Missouri. Concerning this trip, J. Christopher Conkling’s A Joseph Smith Chronology records the following:

Joseph’s party arrives in Independence, Mo. There is a glorious reunion with missionaries there. . . .

Joseph leaves Independence in a canoe with ten elders. After several days of many dangers on the rivers, and after W. W. Phelps sees a daylight vision of the destroyer upon the waters, Joseph receives, on Aug. 12, D&C 61.[1]

After William W. Phelps saw the destroyer on the waters, the Prophet Joseph Smith received the following revelation:

And now I give unto you a commandment that what I say unto one I say unto all, that you shall forewarn your brethren concerning these waters, that they come not in journeying upon them, lest their faith fail and they are caught in snares;

I, the Lord, have decreed, and the destroyer rideth upon the face thereof, and I revoke not the decree. . . .

Behold, I, the Lord, have appointed a way for the journeying of my saints; and behold, this is the way—that after they leave the canal they shall journey by land, inasmuch as they are commanded to journey and go up unto the land of Zion. (D&C 61:18–19, 23–24; emphasis added)

The Erie Canal, which passes through Palmyra, is well known in Church history and was the way Lucy Mack Smith, among others, brought her group of Saints to Kirtland. But Doctrine and Covenants section 61 was given after Joseph had left upstate New York. We find no record that he used the Erie Canal again after 1831. Certainly, it would not have been any help returning from Jackson County to Kirtland. Another canal must have been referred to in section 61.

Ohio also had an extensive canal-building program.[2] New York’s Erie Canal showed so much promise to improve access to upstate New York and bolster its economy that other states quickly decided to follow suit, even before the canal was completed. In Ohio, work on the Ohio and Erie Canal began on July 4, 1825, four months before the first boat went from Lake Erie to New York City via the Erie Canal and the Hudson River.[3] The Ohio canals were built as economical transportation routes from the Great Lakes and northern Ohio to the Ohio River, basically running north and south. Below is a map of the Ohio canal system.[4] 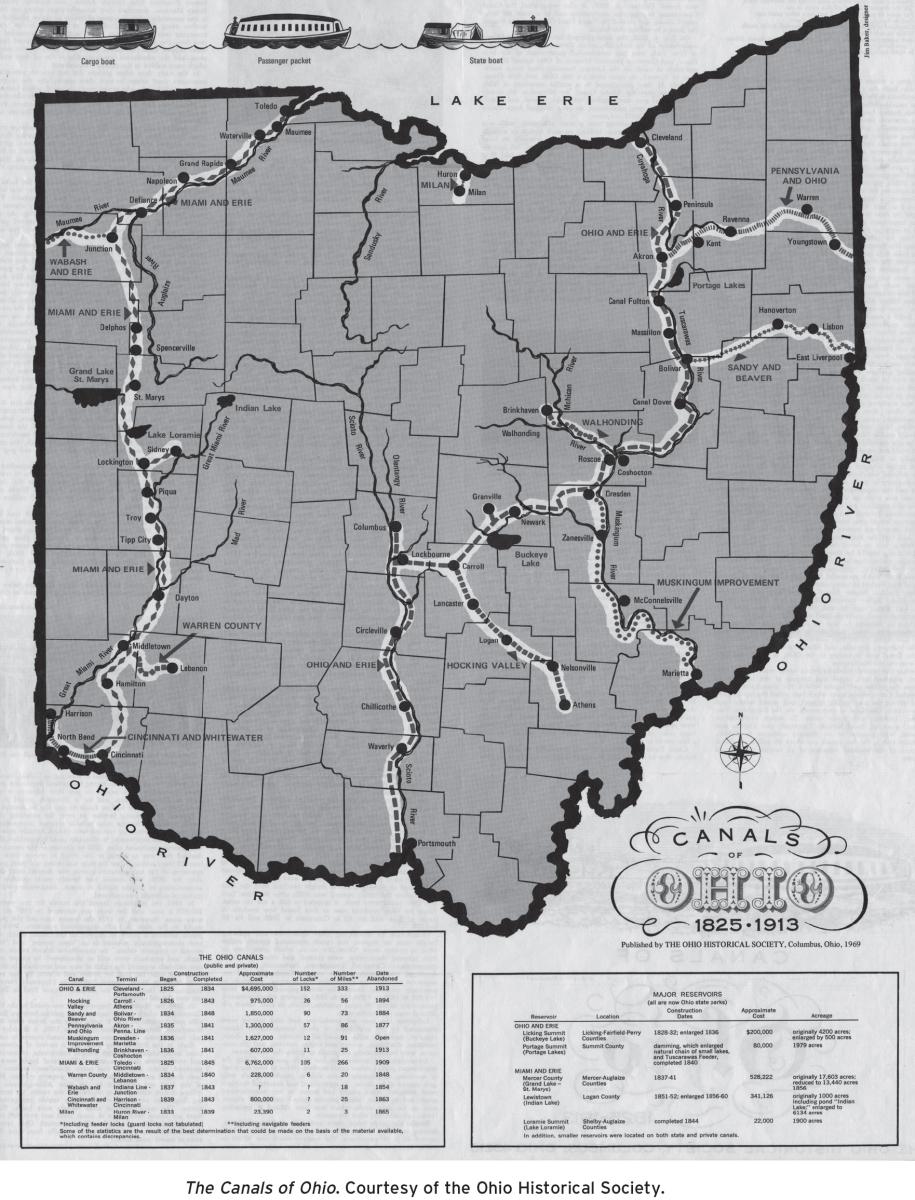 The Ohio and Erie Canal from Cleveland to Portsmouth was not completed until 1832, although much of it was in use when Joseph and his party made the journey to Jackson County in June 1831.2 The portion from Akron to Cincinnati was in use by 1829, and many more sections were in use by 1831. The Miami and Erie Canal from Toledo to Cincinnati was not completed until 1845, even though it was begun only two weeks after the Ohio and Erie. Portions of it from Cleveland to Dayton were in use in 1830. Thus, the canals of Ohio were known and used by Joseph (see D&C 61:24).

Travel was much easier when travelers used canals and rivers. They did not have to face the dust encountered with wagons or stages. Horses pulled the canal boats. Boat travel was also less physically exhausting for the traveler. It was much easier to carry provisions and goods on canal boats and riverboats than on wagons. The Prophet Joseph Smith had already learned on the journey to Missouri just how pleasant using the Ohio canals and the Ohio-Mississippi-Missouri river system would be for moving the Saints to Zion. Section 61 changed all that.

After the Lord’s warning in section 61, the Church journeyed overland to Jackson County from Kirtland and did not use the rivers or even the canals. Groups such as the Colesville Branch were early overland travelers from Kirtland to Missouri. Church history reveals that the Saints did not extensively use rivers again for travel until British and European Saints began coming to Nauvoo via New Orleans, where they would board steamboats for the journey up the Mississippi River.

One important reason for overland travel from Kirtland to Missouri was Zion’s Camp. Only after Zion’s Camp disbanded was the purpose for the journey apparent. It sorted out those who were willing to follow the Prophet without murmuring from those who had little faith and no patience, like Laman and Lemuel in the Book of Mormon. Some of the less-faithful members of Zion’s Camp died or left the Church because Jackson County (Zion) was not redeemed at that time, but most of the original members of the Quorum of the Twelve Apostles were chosen from the faithful members of Zion’s Camp. If the two Zion’s Camp groups had used the canals and rivers, likely no such sorting would have occurred.

Furthermore, because of Doctrine and Covenants 61, the Saints driven out of Caldwell and Davies counties were prepared to travel overland from Missouri east to Nauvoo in winter, when the rivers, including the Mississippi River, were frozen over. The same was true for the infamous winter journey across Iowa from Nauvoo to Winter Quarters in 1846. These overland journeys, mostly in very bad weather, further prepared the Saints for the thousand-mile trek westward to Utah that began the next year. We find no record that Brigham Young ever contemplated the use of flatboats on the Platte River to start the westward journey as Lewis and Clark had done on the Missouri River for their westward trek. Instead, he followed Joseph Smith’s plan and route for moving the Saints “to the Rocky Mountains,” knowing that wagons and teams would be required at some point.[5] Building flatboats to transport wagons and teams partway would have taken more time than it would have saved.

Thus, from the vantage of the present, we see that the counsel in Doctrine and Covenants 61—that the Saints should not seek the easiest path—prepared them in many ways for the westward trek that lay ahead.

1. J. Christopher Conkling, A Joseph Smith Chronology (Salt Lake City: Deseret Book, 1979), 24–26; emphasis added. Note that reference to canal boats was made. However, Church history books do not elaborate on what that meant.

5. The Prophet Joseph Smith sent Elders Orson Hyde and Orson Pratt to petition Congress to let the Saints open the West: “April 25, 1844, Orson Hyde made a lengthy report of his labors in Washington. Orson Pratt was with him, and they drafted a bill to be presented to Congress in which they said their general course would be westward, through Iowa to the Missouri River, thence up the ‘North Fork of the Platte into the mouth of the Sweetwater River in longitude 107 degrees, 45 minutes west, and thence up said Sweetwater River to the south pass of the Rocky Mountains about 1100 miles from Nauvoo; and from said south pass, in latitude 42 degrees, 28 minutes, north to the Umpaqua and Klamet Valleys in Oregon bordering on California’” (Joseph Fielding Smith, Doctrines of Salvation, ed. Bruce R. McConkie [Salt Lake City: Bookcraft, 1954–56], 3:334). The Mormon Trail followed this route almost exactly to South Pass, where it turned southwest into the Salt Lake Valley.

Richard E. Bennett notes that “while building their cabin city at Winter Quarters, skirmishing with Indians, sparring with agents, eking out a living, and coping with sickness and disease, Church authorities analyzed and reanalyzed their plans. In question was the spring departure of a pioneer company of yet unknown size and makeup, along some still-to-be-finalized overland trail, to some obscure resting place at the foot of the mountains, and eventually to ‘Zion’ in some undetermined valley over the Rockies. The planning councils in which these issues were discussed were essentially extensions of earlier Nauvoo deliberations, for the leaders had always intended to reestablish the Church in the West. But their stay at the Missouri provided time and opportunity to restock their supplies; rethink their plans; confer with gentile traders, trappers, and missionaries who knew the West firsthand; obtain the best, most reliable maps; and formulate a deliberate, foolproof plan of action. Yet despite these advantages, until the eve of their exodus they did not agree on many details of their impending march and eventual destination. And if Brigham Young knew precisely where he was going when he and the advance party left in April 1847, it was the best-kept secret in camp” (“Finalizing Plans for the Trek West: Deliberations at Winter Quarters, 1846–1847,” 24, no. 3 [Summer 1984]: 235; emphasis added).