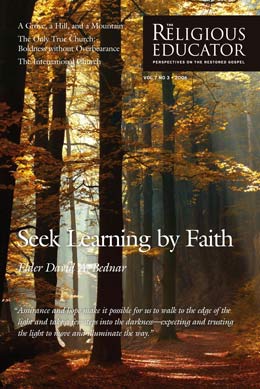 Although many instructors know the principle of teaching by the Spirit, Elder David A. Bednar focuses on a companion principle: helping people to “learn by faith.” This latter principle challenges learners to open their hearts to the promptings of the Holy Ghost, who is the true teacher.

“Both Joseph Smith and Moses faced severe opposition from the adversary in their quest to know God and fulfill His will,” writes Cameron J. Packer. “Through difficult experiences they learned valuable lessons on how to prevail when attacked by Satan.”

As we boldly proclaim that The Church of Jesus Christ of Latter-day Saints is the Savior’s church, we can also acknowledge the good that exists in other religions, as Eric-Jon K. Marlowe states in his article

Father in Heaven frequently manifests His favor to us in ways we do not see with our physical eyes but rather with our spiritual insight. In “God’s Manifestations: The Authoring and Finishing of Our Faith,” Richard D. Hawks identifies the companionship of the Holy Spirit as one of the most important manifestations of God’s love that we can have in mortality

In sections 66 and 75 of the Doctrine and Covenants, the Lord counsels William E. McLellin to join in the cause of building the kingdom. In a thought-provoking article, C. Robert Line looks at the life of Brother McLellin and the interaction between forgiveness and lost opportunities.

After witnessing the struggles of early immigrants to learn how to spell in the English language, President Brigham Young initiated spelling reform in what was called the Deseret Alphabet. Learn what became of this bold experiment.

How does learning about the international growth of the Church affect how instructors teach the Doctrine and Covenants? Professor Donald Q. Cannon testifies that we belong to a worldwide organization, not just an American church, concluding that it helps to share the stories of pioneering members throughout the earth as examples of faith.

Jesus, as the Master Teacher, adapted His message to the culture of the listener. In like manner, we can consider differences of language, culture, ethnicity, and gender as we prepare messages that will reach the hearts of our students.

We close with an article on biblical Hebrew words that we may use without being aware of their heritage, as well as an article on how understanding the character of God can deepen and strengthen our relationship with others.

Finally, we thank Thomas Valletta and Melinda Shaha for their help in producing this issue in conjunction with the Church Educational System.