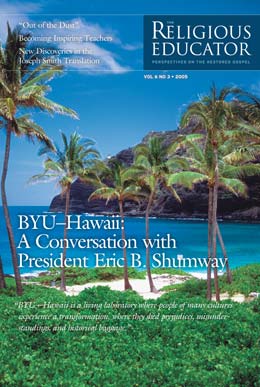 Bryce Dunford was an Instructional Designer for CES Training Services when this was written.

A friend of mine once received a note from her son’s school teacher asking if she would help him learn to tie his shoes. A little embarrassed at the thought of her child, who was actually quite intelligent, holding out an untied shoe to his teacher, she suddenly realized it was her fault. She had never given him the chance. She just did it for him. Every time! It had never occurred to her to help him do it himself. Now she realized that he had grown up content to let others tie his shoes.

Religious educators are sometimes like my friend. Perhaps our greatest shortcoming isn’t that we do things poorly. Instead, maybe the problem is that we do some things too well—so well that we never let our students do them. Perhaps we have become like the father who takes over the building of his son’s pinewood derby car because his inexperienced boy would mess things up. Our students may have a good experience in our classes, they might walk away uplifted, even amazed at the insights we shared, but if we always do for them what they must do for themselves, they will be unprepared for a world that needs them to do far more than tie their own shoes.

The Lord has declared that edification requires more than an inspired teacher. Students must receive “the word of truth . . . by the Spirit of truth” or else “it is not of God” (D&C 50:19–20; emphasis added). This requires that students do more than just listen, even to a Spirit-filled instructor! Students must be given opportunities to receive by the Spirit of truth and should be taught how to do so.

The following three principles will help teachers in this task:

Principle 1: Truth Is More Readily Learned When It Is Sought

Revelation flows most readily when it is sought. Many revelations in the Doctrine and Covenants illustrate that principle; often they came when the Prophet Joseph Smith had a question. The role of the teacher is not necessarily to answer those questions, but rather to foster that divine curiosity that causes students to wonder and to seek and to ask. It is to “[stir] up the faith of multitudes to feel after [God]” (Joseph Smith, comp., Lectures on Faith [1985], 17–18). It is then that revelation flows and lives change. It is then that the real teacher, the Holy Ghost, takes over and pours light into a hungry soul.

Consider how the Master taught the brother of Jared in Ether 3. He climbed Mount Shelem to have the Lord touch the 16 stones, and he walked down having seen the spirit body of the Savior and conversed with Him about unspeakable things. What happened?

After the Lord answered his request and touched the stones, the brother of Jared “fell down before the Lord, for he was struck with fear.”

The Lord asked, “Why hast thou fallen?”

“I saw the finger of the Lord, and I feared lest he should smite me; for I knew not that the Lord had flesh and blood,” was his explanation.

Then, after clarifying that His body was not yet of “flesh and blood” and commenting on his faith, the Greatest of All Teachers asked the question that changed the world, “Sawest thou more than this?”

Think about that for a moment. Why would an omniscient God, who knew exactly what the brother of Jared did and did not see, ask that question? Why? Because He also knew what that question would do to His student. It suggested to the mind of this Jaredite prophet that there was more to see and that he might be permitted to see it. His curiosity piqued, the brother of Jared replied, “Nay; Lord, show thyself unto me.” (Ether 3:6–10.) And with his heart now prepared, the Creator did just that.

What a lesson for all teachers! Certainly the brother of Jared did not ascend the mountain thinking how he might see “all the inhabitants of the earth which had been, and also all that would be . . . even unto the ends of the earth” (Ether 3:25). But something his Teacher did caused his soul to yearn for something more—something deeper.

Another illustration of this principle is found in section 137 of the Doctrine and Covenants. Here the Lord desired to teach the Prophet Joseph vital truths about the salvation of the dead. He did not, however, just jump right in and say, “All who have died without a knowledge of this gospel, who would have received it if they had been permitted to tarry, shall be heirs of the celestial kingdom of God” (D&C 137:7).

Instead, the Master Teacher first prepared the heart of the young prophet by causing him to marvel. This He did by showing Joseph the beauty and grandeur of the celestial kingdom. He showed him the gates through which the heirs of that kingdom will enter, the blazing throne of God, and streets that appeared to be paved with gold. Then Joseph saw something he did not expect to find in the celestial kingdom—his brother Alvin, who died before the ordinances of the gospel had been restored.

Now why would the Lord do that? Of all the possible inheritors of the celestial glory, why Alvin? Perhaps it is because the Lord knew what seeing Alvin would do to Joseph. He also knew that a ponderous heart is often the most receptive to revelation. As Joseph marveled, he heard the voice of inspiration. His question was answered.

And so it is with every student. Our role as teachers is to create that sense of wonder and awe—to stir them up so that they seek and search and ask and ponder. As they marvel, the voice of inspiration will distill upon them and whisper to their soul. They will then be taught what a mortal teacher could never teach them, and with a power that mortals do not possess. Then they will know that the answers to the most important questions come not from gifted instructors, but from a loving Heavenly Father through the whisperings of His Spirit.

Principle 2: Truth Is Often More Appreciated When It Is Discovered

This principle is powerfully illustrated as Nephi is taught about his father’s vision of the tree of life. After seeing the tree that his father saw, Nephi tells his heavenly instructor that he desired “to know the interpretation thereof.” Now pay particular attention to how his tutor responds to Nephi’s inquiry. Unlike their mortal counterparts often do, this divine teacher and then his angelic assistant do not answer Nephi’s question. Rather, they guide him through a process of discovery that allows Nephi to find his own answers:

“Look,” he said and showed unto Nephi a virgin in the city of Nazareth.

“Nephi, what beholdest thou?”

He knew enough to answer, “A virgin, most beautiful and fair above all other virgins.”

“Knowest thou the condescension of God?”

Nephi did not know. He knew that God loved His children, but apparently he did not fully understand the relationship between the virgin and the condescension of God.

This time things were different. Nephi understood and was able to answer his own question:

There is a great difference between telling students the answers and guiding them through the process of discovery so that they find their own solutions. When Philip met a man from Ethiopia reading from the book of Isaiah, he asked him, “Understandest thou what thou readest?” “How can I,” was the reply, “except some man should guide me?” (Acts 8:30–31; emphasis added). Notice that he did not ask for someone to tell him, rather he wanted someone to guide him to understanding.

That is why students need teachers—not to tell them all the answers, but to guide them to find the answers themselves. Doing so helps students own the truths that they discover. They are then more likely to carry those principles and doctrines in their hearts as a permanent possession throughout their lives.

The gospel truths that I treasure the most and remember most frequently are those I have discovered on my own. Helpful teachers may have guided my study, but the discovery, the “Ah-ha!” the epiphany, occurred within my soul. A careless teacher can rob students of such moments. The temptation to answer every question and to have every solution may be more harmful than helpful.

Principle 3: Truth Can Be More Influential When It Comes from a Peer

There are defining moments in each lesson. They usually occur at the climax of a discussion when the main point is made and the Holy Ghost powerfully testifies of its truthfulness. Any teacher can tell you how tempting it is to hold on to those moments and reserve them for themselves. We often want to be the one who says all the important things—that places us in a position of power.

In contrast, as the Savior approached one of those moments, He stepped out of the limelight so that someone else might step forward and teach—a group you might least suspect.

After He had opened the scriptures, “He did expound all things, even from the beginning until the time that he should come in his glory—yea, even all things which should come upon the face of the earth” (3 Nephi 26:3). Then came the moment when even greater truths were taught, but not by Him:

“And it came to pass that he did teach and minister unto the children of the multitude of whom hath been spoken, and he did loose their tongues, and they did speak unto their fathers great and marvelous things, even greater than he had revealed unto the people” (v. 14; emphasis added).

Again I ask, Why would the Savior do that? Why let little ones teach such important truths? Imagine the impact that had on those parents, to hear such marvelous things from their own children.

The Savior knew something that has taken many of us years to figure out—that the most influential person in a class is often not the teacher. Teachers are expected to be brilliant—to have all the answers. They are expected to be men and women of faith and deep understanding. But consider what happens when truth is taught or testimony is borne by a friend, a classmate, or in the example of 3 Nephi, a child.

Consider how this principle relates to modern students. The testimony of their teacher will undoubtedly have a tremendous affect of them. But so also will the testimony of their friends and classmates; perhaps even a greater impact. Think how the life of a high school sophomore might be influenced when he or she hears the witness of the senior they admire? How might the senior be affected when he or she hears how a gospel principle has changed the life of a sophomore?

Consider what might happen in the lives of young people if we turned more of those defining moments over to our students—if we stepped out of the limelight and let someone else say the important things. Perhaps less of that light would shine on the teacher, but the result in the lives of our students would be tremendous.

May we have more of the desire uttered by John the Baptist when his disciples expressed concern that Jesus was becoming more popular than John. He said, “He must increase, but I must decrease” (John 3:30).

These three principles will help teachers turn their students to Him, the True Light. Those students will then be able to stand with shoes tied, ready to face the world that so desperately needs them.