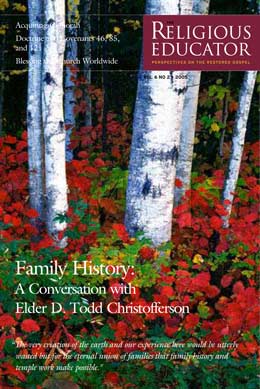 Studying the Book of Mormon Online

R. Mark Matheson has a doctor of management degree and was a voluntary instructor at the institute serving the Utah State Prison when this was written.

It all started at the Salt Lake Temple a few years ago. I was attending a sealing for the wedding of the son of dear friends. The sealer, President Ezra Taft Benson’s son, quoted his father about reading daily from the Book of Mormon: “At present, the Book of Mormon is studied in our Sunday School and seminary classes every fourth year. This four-year pattern, however, must not be followed by Church members in their personal and family study. We need to read daily from the pages of the book that will get a man ‘nearer to God by abiding by its precepts, than by any other book.’”[1]

Upon leaving the temple, I did not remember advice about becoming a better spouse as I often do after sealings. Instead, it was the impact of President Benson’s quotation that warmed my heart on that cold December day of 2002. Since then I have read from the Book of Mormon every day except three, and answering that challenge has changed my life.

The key for me in abiding this prophet’s counsel was that I did not attempt to fulfill my resolve by starting in 1 Nephi, as I have so many times before. Instead, I fulfilled the command to read every day by studying specific subjects using the Church’s online scriptures and its search tools. This is when I started to see a difference between reading the scriptures and studying them. There are five primary benefits I have noticed from studying rather than just reading the scriptures:

Following are four examples of the increased understanding I have found as I study by subject. This deeper comprehension might have eluded me in my old reading practice.

I have heard many people mention how often the Book of Mormon pages in some fashion mention Jesus. The actual name Jesus as a proper noun is used in 163 verses in the Book of Mormon. The uses of this special name are scattered throughout the length of the book, starting late in 2 Nephi 25 when Nephi perhaps received it from an angelic instructor. Jesus is used in seven verses in the end of 2 Nephi, once in Jacob, and four times in Mosiah (only in King Benjamin’s discourse).King Benjamin, like Nephi, received knowledge of Christ’s name from revelation: “And the things which I shall tell you are made known unto me by an angel from God” (Mosiah 3:2). His father, the first King Mosiah, may already have been familiar with that sacred name from Nephi’s writings.

Jesus is named in fourteen verses in Alma, four verses in Helaman, eighty times in 3 Nephi, and nine times in 4 Nephi. The name occurs quite prolifically in the last three books authored by Mormon and his son: twenty-two verses in Mormon, eleven in Ether, and ten in Moroni. Mormon and Moroni’s use of Jesus’s name may be due to the fact that He was a personal visitor to them. Mormon relates: “And I, being fifteen years of age and being somewhat of a sober mind, therefore I was visited of the Lord, and tasted and knew of the goodness of Jesus” (Mormon 1:15).

Because of his faith, the brother of Jared had the amazing experience of seeing the premortal Jesus: “Wherefore, having this perfect knowledge of God, he could not be kept from within the veil; therefore he saw Jesus; and he did minister unto him” (Ether 3:20). It seems reasonable that Moroni, after translating the wondrous experience of the brother of Jared, would have sought for a similar manifestation during the many years he wandered alone. That it was granted is indicated by verses near the end of the book of Ether and then again in chapter 8 of the book of Mormon: “And then shall ye know that I have seen Jesus, and that he hath talked with me face to face, and that he told me in plain humility, even as a man telleth another in mine own language, concerning these things,” and “behold, Jesus Christ hath shown you unto me, and I know your doing” (Ether 12:39; Mormon 8:35).

I would not have discovered the varied number of times the name of Jesus is used in the Book of Mormon from chronological reading. Following this first insight from online topical study, I desired to know how other names or titles of the Savior are employed by Book of Mormon authors.

The Restoration of the fullness of the gospel provides a knowledge of the proper relationship between God the Father and His Son Jesus Christ. With this perspective, the phrase “saith the Father” caught my attention one day. I started to search for all its uses and found that it is only used in the Book of Mormon and nowhere else in the standard works. It appears eleven times in 3 Nephi 16, 20, and 21 and once in 2 Nephi 31. What a powerful witness of the divine sonship of Christ, to have instances in His own words where He quotes the Father. Curiosity led me to explore other related phrases. For example I found that there is only one occurrence each of “commandeth the Father” (3 Nephi 16:10) and “the Father commandeth” (3 Nephi 11:32) in all the standard works.

Endure to the End

“Endure to the end” is a scriptural phrase that grows more meaningful to me as I age. I have read it many times, but not until I compiled all the twenty-one Book of Mormon verses which talk about enduring did I find little nuances that together crystallize the importance of this admonition. The standard usage we associate with this expression is found in 1 Nephi 13:37: “endure unto the end.” In 2 Nephi 9:18 it is expanded to “they who have endured the crosses of the world, and despised the shame of it” (emphasis added). Further enlightenment comes from 2 Nephi 33:4, “and to endure to the end, which is life eternal” (emphasis added).

I see an interesting idea chain in Alma 32:13: repent—mercy—endure—saved: “Whosoever repenteth shall find mercy; and he that findeth mercy and endureth to the end the same shall be saved” (emphasis added). Then in Moroni, numerous new shades of meaning modified my understanding of enduring. These include “the endurance of faith” (Moroni 3:3, emphasis added), “endureth all things” (Moroni 7:45, emphasis added), and “endureth by diligence unto prayer” (Moroni 8:26, emphasis added). Thus, computer-assisted searching and intense study of this interesting phrase has helped me more deeply consider and appreciate a commandment which I had previously deemed self-evident and even facile.

The Faithful Shall Prosper

I have always loved to read the promise “inasmuch as ye shall keep my commandments, ye shall prosper” (1 Nephi 2:20). While a young man, this scripture became a comforting answer to a matter I had presented to the Lord in prayer. For years since then, while reading chronologically in the Book of Mormon, I have enjoyed rereading the Lord’s promise of prosperity for those who are faithful. But it was not until I made a concerted study of the phrase that I found it appeared as many as nineteen times in that the Book of Mormon, including seven out of the first ten books. Even in the shorter records of Jarom and Omni, where there is little space for doctrine, this promise of the Lord was repeated (see Jarom 1:9 and Omni 1:6). Here again studying by subject reinforced and magnified for me a beautiful concept with which the Lord had excited my comprehension years before.

From these and other experiences I have had with computer-assisted scripture learning, I offer three more ideas that may help others adopt a successful topic study habit.

First, many times ideas from one day’s search will provide the subject for the next day’s search. For example, in studying honesty one day the word upright was linked to it in Alma 27:27: “And they were also distinguished for their zeal towards God, and also towards men; for they were perfectly honest and upright in all things.” This provided the topic for the next day’s search of the nine verses in the Book of Mormon that employ either upright, uprightly, or uprightness. If while we read we are vigilant for new study topics and open to spiritual promptings, we can be guided toward new subjects of study that will enrich our lives.

Second, the change of pace that comes from following a varied selection of study topics can reinvigorate our love of the scriptures. For instance, sometimes the subject I choose for my personal study is covered in as little as one day, as in a recent search on the use of the word discern. Other times I have spent weeks on one subject, such as what the Book of Mormon instructs about teaching or prayer. This variety of intensity and focus keeps me from becoming bored or overwhelmed by scripture study.

Finally, studying topically can uncover meaningful cross-references not available through general footnotes. For instance, one of my heroes in the Book of Mormon is Shiblon, the third son of Alma the Younger. He is the quiet middle brother. He does not get the focus of his higher profile, righteous brother Helaman (Alma 36–37, 3266 words), nor the negative limelight of the more visible but less righteous Corianton (Alma 39–42, 3,875 words). I was familiar with the counsel he received from his father in one of my favorite chapters, Alma 38 (649 words). But, I was not aware of other mentions of Shiblon elsewhere in the Book of Mormon. I was pleasantly surprised when I found his name mentioned in a verse that has positively impacted me. “Shiblon took possession of those sacred things. . . . And he was a just man, and he did walk uprightly before God; and he did observe to do good continually, to keep the commandments of the Lord his God; and also did his brother” (Alma 63:1–2).

“Doing good continually” is how Jesus was described in Acts 10:38. I love that description. I wondered why I had never connected that treasure in Acts 10 with the similar phrase in the Book of Mormon. I quickly turned to Acts 10:38 to see if Alma 63:1–2 was listed as a cross-reference. It was not. Reading only the given footnotes would not have led me to a choice verse in the Book of Mormon complementing one of my favorite New Testament verses and shedding further light on one of my Book of Mormon heroes.

Elder M. Russell Ballard has said: “It is incumbent upon each of us to do everything we can to increase our spiritual knowledge and understanding by studying the scriptures and the words of the living prophets. When we read and study the revelations, the Spirit can confirm in our hearts the truth of what we are learning; in this way, the voice of the Lord speaks to each one of us.”[2]

I have composed this article in response to President Benson’s invitation: “I challenge our Church writers, teachers, and leaders to tell us more Book of Mormon conversion stories that will strengthen our faith and prepare great missionaries. Show us how to effectively use it as a missionary tool, and let us know how it leads us to Christ and answers our personal problems and those of the world.”[3] My testimony of the truthfulness of the Book of Mormon has deepened as I have immersed myself in studying its wonderful doctrines and themes. This is a book from God that becomes richer and more profound as we diligently and creatively study it. I will forever be grateful to the sealer that reminded me of its value and to President Benson’s words, which prompted me to transform my study of this great book.