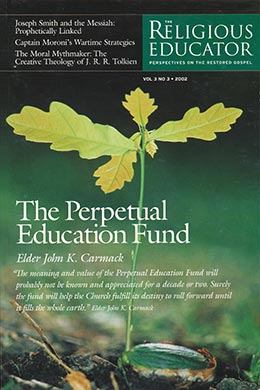 President Gordon B. Hinckley tells of a man who changed his prayers from “Bless the poor and the sick and the needy” to “Father, show me how to help the poor and the sick and the needy, and give me resolution to do so.” In May 2001, President Hinckley announced the Perpetual Education Fund, a bold new program to help less-advantaged members get on their feet financially. In this issue of the Religious Educator, Elder John K. Carmack, managing director of the PEF, offers a behind-the-scenes look at the program and the inspiration that gave it birth. “What a wonderful journey!” said Stanley A. Peterson of his experiences as an administrator in the Church Educational System. But the term journey is more than figurative. During his twenty-four-year leadership, Brother Peterson traveled more than four million miles and visited instructors in 150 countries. In this time period, seminary and institute enrollments more than doubled, and the curriculum was significantly streamlined. Since 1938, General Authorities have offered nearly 130 talks relative to education. In “‘Those Who See’: A Century’s Charge to Religious Educators,” authors Scott and Brent Esplin have distilled the essence of this counsel, offering their own insights as well. A list of these inspired addresses from beloved Church leaders is included at the end of their article. Our youth need heroes, and Brigham Young was one of the finest, demonstrating his discipleship through both word and action. In “Brigham Young: A Disciple Indeed,” W. Jeffrey Marsh, associate professor of ancient scripture at BYU, highlights Brother Brigham’s discipleship, including striking similarities to the work of President Gordon B. Hinckley, testifying of their undeviating faith. Since the theatrical release of The Lord of the Rings: The Fellowship of the Ring and the new release of The Two Towers, an ever-increasing number of people have become acquainted with the works of J. R. R. Tolkien. We think our readers will appreciate knowing more about this important Christian author and scholar. Paul Nolan Hyde’s essay, “The Moral Mythmaker: The Creative Theology of J. R. R. Tolkien,” brings important background to the current movie phenomenon. We hope you enjoy the rich variety in this issue. Note: In the Religious Educator, volume 3, no. 2, pages 170–71, the name “Elder Pratt” was used by mistake. It should read “Elder Hyde.” Sorry for the confusion; it is part of our learning curve.