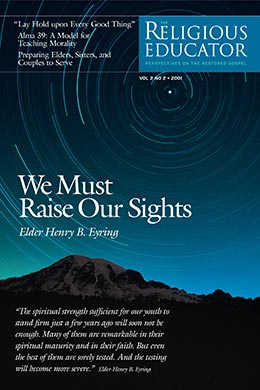 Eli and His Sons: Some Lessons for Parents

Frank F. Judd Jr. was Instructor of Ancient Scripture at BYU when this was published.

The prophet Nephi stated, “I did liken all scriptures unto us, that it might be for our profit and learning” (1 Nephi 19:23). Numerous stories in the scriptures illustrate how parents have tried, either successfully or unsuccessfully, to teach their children to keep the commandments of God.[1] Thankfully, we can learn important lessons from both types of examples.

One such instructive story is that of Eli and his two sons, Hophni and Phinehas. Before Solomon built a permanent temple at Jerusalem, the portable tabernacle was located at Shiloh, a city north of Jerusalem. Eli was the priest (probably the high priest)[2] over the tabernacle at Shiloh (1 Samuel 1:9, 2:11) as well as a judge in Israel (1 Samuel 4:18). By this time, Eli was ninety-eight years old (1 Samuel 4:15).

One day Hannah was at the tabernacle earnestly pleading with the Lord to bless her with a son and promising to dedicate her future child to the service of the Lord. When Eli observed Hannah, he was inspired to declare to her, “Go in peace: and the God of Israel grant thee thy petition that thou hast asked of him” (1 Samuel 1:17). Later, after she gave birth to a son, Hannah brought the young Samuel to Eli to fulfill her vow (1 Samuel 1:24–28). Under the supervision of Eli, Samuel faithfully served at the tabernacle (1 Samuel 2:11).

Unfortunately, Eli’s own sons did not submit to their father’s supervision as Samuel did. Like their father, Hophni and Phinehas were also priests at the tabernacle (1 Samuel 1:3). The sons of Eli “knew not the Lord” (1 Samuel 2:12). They are referred to as “sons of Belial” (1 Samuel 2:12), which is a term of derision used elsewhere in the scriptures.[3] The word Belial basically means “wickedness” or “worthlessness.”[4]

When Eli heard what his sons were doing, he was very concerned. He chastised his unruly sons by saying, “Ye make the Lord’s people to transgress” (1 Samuel 2:24). By forcing those who presented sacrifices to relinquish the meat before burning the fat, the sons of Eli were causing them to break the law of Moses. Alma’s strong words to his wayward son Corianton, who had committed fornication with the harlot Isabel, reflect a similar situation and reaction: “Behold, O my son, how great iniquity ye brought upon the Zoramites; for when they saw your conduct they would not believe in my words” (Alma 39:11). Poor examples can have lasting effects.[6]

As priests, Hophni and Phinehas were consecrated to be holy representatives and upstanding teachers; in a sense, they belonged to the Lord.[7] Eli instructed his sons that they did not merely “sin against another” person but rather they did “sin against the Lord” (1 Samuel 2:25). In an analogous situation in the New Testament, Ananias and Sapphira had covenanted with the Lord to sell their possessions, giving all the proceeds to the Church as part of their living the law of consecration. However, as the Apostle Peter told them, by keeping back a portion of their money and breaking their covenant, Ananias and Sapphira had “not lied unto men, but unto God” (Acts 5:4). Covenant breaking threatens our relationship not only with others but also, more importantly, with Heavenly Father.

After the sins of Hophni and Phinehas, a man of God delivered the message to Eli in the name of the Lord that Eli was guilty of honoring his sons more than the Lord (1 Samuel 2:27–30). Although Eli chastised Hophni and Phinehas, he apparently had not done everything he could to correct their bad behavior. Eli was guilty of neglecting his parental duties toward his sons because “he restrained them not” (1 Samuel 3:13). As a result of Eli’s neglect, the Lord said that Eli and his house would be cut off from His favor and that, as a sign of the truth of the Lord’s words, both sons would die on the same day (1 Samuel 2:30–34).

Parenting is a serious responsibility that carries grave consequences for neglecting responsibility. The Lord has declared in the latter days that “inasmuch as parents have children in Zion, or in any of her stakes which are organized, that teach them not to understand the doctrine of repentance, faith in Christ the Son of the living God, and of baptism and the gift of the Holy Ghost by the laying on of the hands, when eight years old, the sin be upon the heads of the parents” (D&C 68:25).[8]

After the Israelites went out to fight against the Philistines and lost a battle, the sons of

Meanwhile, Eli nervously waited at Shiloh for the safe return of the ark (1 Samuel 4:13), only to be greeted with the tragic news that “thy two sons also, Hophni and Phinehas, are dead, and the ark of God is taken” (1 Samuel 4:17). As a sad conclusion to this story, when Eli heard that the ark was captured, he fell backwards off his seat, broke his neck, and died (1 Samuel 4:18).

There are several lessons to be learned from the experiences of Eli and his sons. As a priest of the Lord, Eli successfully supervised Samuel at the tabernacle but was not as diligent as he could have been toward his own sons. In a similar fashion, although many endeavors may be worthy of our time and attention, we ought not to neglect our responsibility toward our family because of our devotion to other activities. The First Presidency recently stated, “We counsel parents and children to give highest priority to family prayer, family home evening, gospel study and instruction, and wholesome family activities. However worthy and appropriate other demands or activities may be, they must not be permitted to displace the divinely-appointed duties that only parents and families can adequately perform.”[9] As President David O. McKay taught, “No other success can compensate for failure in the home.”[10] We must learn by the Spirit how to strike the proper balance between family and other responsibilities.

Further, we should not assume that parents are culpable for the poor conduct of their children. Many righteous parents earnestly strive to teach their children from their youth the principles of the gospel, yet their children still go astray. At the same time, however, we must not downplay the crucial responsibility of parents to instruct their children. President Gordon B. Hinckley has given the following counsel:

I recognize that there are parents who, notwithstanding an outpouring of love and a diligent and faithful effort to teach them, see their children grow in a contrary manner and weep while their wayward sons and daughters willfully pursue courses of tragic consequence. For such I have great sympathy, and to them I am wont to quote the words of Ezekiel: “The son shall not bear the iniquity of the father, neither shall the father bear the iniquity of the son” (Ezekiel 18:20).

But such is the exception rather than the rule. Nor does the exception justify others of us from making every effort in showing forth love, example, and correct precept in the rearing of those for whom God has given us sacred responsibility.”[11]

Finally, we understand that the family unit is at the heart of the gospel of Jesus Christ. In the inspired declaration “The Family: A Proclamation to the World,” the First Presidency and the Quorum of the Twelve Apostles solemnly affirmed, “Parents have a sacred duty to rear their children in love and righteousness, to provide for their physical and spiritual needs, to teach them to love and serve one another, to observe the commandments of God and to be law-abiding citizens wherever they live. Husbands and wives—mothers and fathers—will be held accountable before God for the discharge of these obligations.”[12]

The story of Eli and his sons reminds us of the serious responsibility parents have to teach their children the principles of the gospel of Jesus Christ and the heartbreaking consequences that can result if parents neglect this sacred obligation.[13]

[1] For an excellent summary of what the scriptures say about parenting, see Robert J. Matthews, “What the Scriptures Say about Rearing Children,” Ensign 2, no. 12 (December 1972): 34–35.

[9] Circular letter from the Office of the First Presidency of The Church of Jesus Christ of Latter-day Saints, 11 February 1999. See also 1 Timothy 3:4–5.

[13] Helpful ideas and suggestions for parents are available at the Church’s official website (www.lds.org) through the link of “Family Resources.”