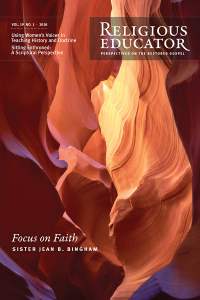 This issue of the journal begins with the address that Sister Jean B. Bingham gave at the United Nations on the topic of the LDS Church’s interest in worldwide humanitarian efforts. Her voice offers a valuable perspective on the topic of the centrality of humanitarian work to LDS belief and practice, demonstrating how the Church remains committed to working across denominational lines to offer relief. I think her encouragement to find a place for refugees at a time when Syrian refugees were being covered in the news was particularly powerful. Her presentation is short but insightful.

I found Jennifer Reeder’s encouragement to use LDS women’s voices in teaching particularly compelling, especially in light of her recent publication with Kate Holbrook of extracts from the Relief Society minute books. That book, At the Pulpit: 185 Years of Discourses by Latter-day Saint Women, is a treasure trove of resources for the LDS teacher who wants to include the voices of female believers and leaders in the classroom.

This issue also brings together several diverse studies on the Book of Mormon, including a study on its usage in twentieth-century LDS missions, on asking questions while teaching the Book of Mormon, and a textual study on Abish and her role in the Lamanite restoration. In particular, John Thomas furthers the conversation about the centrality of the Book of Mormon, offering a nuanced response to the earlier work of Noel Reynolds in BYU Studies 38, no. 2 (1999). Holt Zaugg envisions the LDS classroom and the role that questioning plays in how we both interpret and interact with the text. These studies all circle around a central issue, namely the importance of the Book of Mormon for LDS belief and practice.

Finally, I think many readers will be interested in the exploratory study by Eric Rackley and John Hilton III on the topic of identifying what motivates LDS youth to read their scriptures. There are interesting story lines in this article, and LDS educators will find valuable perspectives both for why scriptural literacy is important and what methods encourage greater literacy.