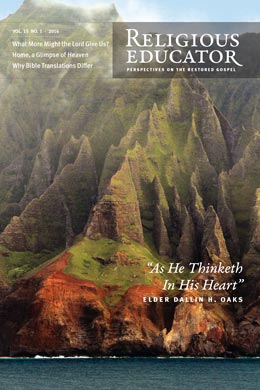 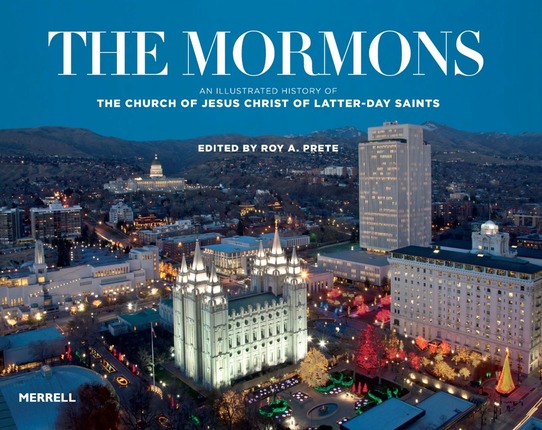 Authors of The Mormons include eight faculty members from BYU Religious Education and six writers from other fields. The result is a gorgeously illustrated history of Mormonism.

The Mormons replaces the very popular (but now very outdated) Meet the Mormons. Roy Prete, the general editor of this new volume, told me in a personal interview that the idea for this book came after a 2012 author banquet in which Elder L. Tom Perry invited the authors and artists in attendance to spread the message of the restored gospel to the world. Roy took the challenge to heart and began recruiting a talented team of authors to tell the Latter-day Saint story both succinctly and eloquently. Those authors include eight faculty members from BYU Religious Education and six writers from other fields. The result is a gorgeously illustrated history of Mormonism.

The introduction states the straightforward purpose of the book: to offer “a behind-the-scenes look at Mormons” (vii). Thus the photos and artwork are essential parts of the whole. The volume features hundreds of well-known iconic photos and some beautiful new images, many featuring the global Church. All the photos have well-written captions that tell the Church’s story at a glance. In this light, it succeeds well as a basic and beautifully illustrated introduction to the Church’s history, doctrine, and culture.

The essays themselves are short and easy to read. For example, in chapter 3, “Joseph Smith and the Restoration,” Susan Easton Black briefly traces the story of the First Vision, the translation of the Book of Mormon, the restoration of priesthood authority, and the reestablishment of the Church. The history then marches quickly through Ohio and Missouri history, the Martyrdom, and the move west to the Rocky Mountains. This quick retelling happens in only ten pages, but it does not seem rushed.

In chapter 4, “Jesus Christ and the Plan of Salvation,” Brent L. Top has the unenviable task of summarizing the plan of salvation, the Atonement of Jesus Christ, and our own part in the plan—all in eight pages. Yet he treats the essential points very well. “Baptism by total immersion in water,” he writes, “is deeply symbolic to Latter-day Saints. It represents not only Jesus Christ’s death, burial, and Resurrection, but also the burying of their old lives of sin and their rebirth to a new life of righteousness and devotion” (43). After discussing the gift of the Holy Ghost, he then links this new life of discipleship to “following in the footsteps of Jesus”—an important emphasis given the frequent criticism that Mormons are not Christians.

Readers who are interested in temples and family history will particularly enjoy Richard O. Cowan’s chapter called “Mormon Temples Dot the Earth” and Kip Sperry’s chapter titled “Family History and Genealogy.” Cowan’s chapter discusses Old Testament sanctuaries as “sacred places,” like mountaintops, “where the heavens and earth meet—places of revelation from God to man” (107). He then links the Old Testament to modern temple practices by sharing the story of the Kirtland Temple and the return of Elijah to restore the sealing keys, leading to an outpouring of world interest in genealogy. The chapter is complemented by many dazzling photos of temples.

Kip Sperry’s chapter builds on Cowan’s chapter and explains how modern Mormon interest in family history grew out of those early experiences in Kirtland. He quotes a poignant statement by Alex Haley, author of Roots: “In all of us there is a hunger, marrow deep, to know our heritage—to know who we are and where we came from. Without this enriching knowledge, there is a hollow yearning. No matter what our attainment in life, there is still a vacuum, an emptiness, and the most disquieting loneliness.” Next, Sperry outlines members’ quest for family history information as they search for facts in family Bibles, letters, archives, and cemeteries. He also discusses such marvelous resources as the Family History Library, the Granite Mountain Record Vault, and FamilySearch.

For celebrity watchers, there is even a chapter by Helen K. Warner, Michael H. Clifton, and Carma T. Prete called “Mormons Who Have Made a Difference,” which features prominent celebrities, athletes, and government and business leaders. While most of the choices were fairly obvious, it was refreshing to note the addition of younger celebrities such as David Archuleta, Torah Bright, Stephenie Meyer, and Jabari Parker. Some surprising omissions from the list were Glenn Beck, Orson Scott Card, Clayton Christensen, and Andy Reid.

This book would make a gift book to share with others who are not of the faith. It would be a great book to display on an end table to spark discussion about Latter-day Saint beliefs. It might even be used in members’ home to teach family home evening lessons.

With all the positives, there is a basic limitation on the amount of new material. The history and doctrinal discussions are mainly quick summary statements that do not into much detail beyond the basics known to most Latter-day Saints. However, those who want a deeper look at Church history or doctrine could look at the bibliography provided for further reading. The key contribution of this book, after all, is its brevity and the beautiful packaging of the basic doctrines.