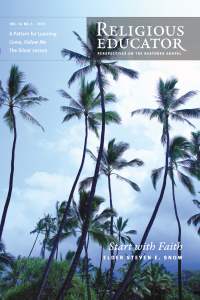 This Is the Way

I recently heard Bill Lloyd’s song “This Is the Way.” The lyrics in the opening verse are “You say you’re so tired of empty promises, / You’re feelin’ stuck and . . . it’s like paralysis, / You say you need to escape / . . . Well, . . . this is the way.” [1] Bill was not writing about the “Way” of Christ, but his lyrics convey a feeling many people experience in mortality. Nephi, having himself experienced his own share of mortality’s challenges and writing from a Christ- and gospel-focused perspective, testified, “This is the way; and there is none other way nor name given under heaven whereby man can be saved in the kingdom of God; . . . this is the doctrine of Christ, and the only and true doctrine of the Father” (2 Nephi 31:21, emphasis added).

This issue of the Religious Educator contains numerous explorations of and insights into the true Way as taught in scripture by latter-day Church leaders and by Jesus Christ himself, who was and is “the way, the truth, and the life” (John 14:6). The invitation to come unto Christ and to walk in his way is the basis for the scriptures, the restored Church, and its curriculum.

It is an invitation extended to all, including those who feel “tired,” who are foundering on the “empty promises” of the world, who feel “stuck” and want “to escape” from roads and ideas that end nowhere. Even for those who are not feeling so desperate, the contents of this issue offer a depth and variety of gospel thought and instruction that will reward careful reading.

I close this note by thanking Joany Pinegar, Brent Nordgren, and Devan Jensen, the full-time publications staff of the Religious Studies Center, for the great pleasure it has been to work with them the past sixteen months. The opportunity to be part of the RSC’s publication team with them has been enjoyable and fulfilling for me. Having received a new assignment, I will be replaced as publications director of the Religious Studies Center by Thomas Wayment, professor of ancient scripture at BYU. I trust this journal and all other RSC publications will benefit from his capable leadership.