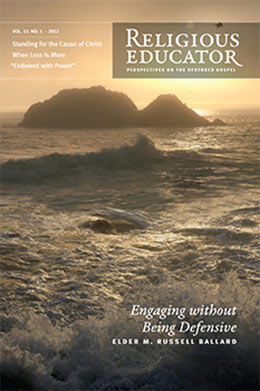 A prevailing sentiment holds that there are two topics thoughtful people ought to avoid in polite company—politics and religion. In a day when two Latter-day Saint Republicans have chosen to seek their party’s nomination for the highest office in the land, it becomes harder for Latter-day Saints to conform to that particular piece of etiquette. In a time described by pundits and media moguls as a “Mormon moment,” the Church and its members are being invited regularly to express themselves, explain themselves, and set the record straight. More and more people tend to talk about us, and a surprising number are seeking to talk with us. This is to be expected, for as the Church begins gradually to be brought out of obscurity, Mormonism will become more of an object of curiosity, if not serious reflection.

Latter-day Saints have been involved in public lectures and even in debates with persons of other faiths since the beginning of this dispensation. Some of these encounters have generated far more heat than light, or to look at it from the opposite direction, far more iciness than insight. For that reason, missionaries and rank-in-file Saints have generally been discouraged from participating in such activities. For example, during the 1960s ecumenical efforts by various religious groups resulted in more doctrinal dilution and compromise than the groups were comfortable with. Consequently, when Latter-day Saints and evangelical Christians began a formal dialogue in 2000, justifiable concern was expressed about the motives and objectives of the participants. In this case, however, both groups were intent on clarifying meaning, correcting misperceptions, building relationships, and achieving understanding—and doing so without compromising one jot or tittle of doctrine. The rest is history, some of which is described in this volume. There are simply too many troublesome issues in our society, issues that threaten time-honored religious and family values, for people who share a belief in the redemptive power of Jesus Christ, to allow theological differences to prevent them from working together to stem the tide of growing secularism and the erosion of moral values. Hence, we felt it worthwhile to devote a portion of an issue of the Religious Educator to the value of interfaith activity. We hope you as readers find this report as stimulating as it has been for us to compile.