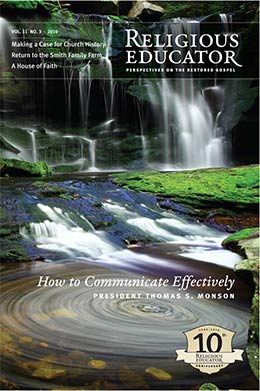 That All May Be Edified

My association with the Religious Studies Center started as it does for most people—I was a consumer reading publications produced by the Religious Studies Center (RSC). Once I came to BYU in 1993 my role changed as I became a contributor to the RSC through the submission of books and articles for publication. I remember walking from the Joseph Smith Building to the Heber J. Grant Building (HGB) to visit Kent P. Jackson, who was serving as the publications director at the time. Kent is one of the best technical editors on campus. With his amazing student staff, he produced wonderful books at the RSC. I feel fortunate to have had Kent’s hand make my projects better than they would have been otherwise.

Later, Bob Millet, then dean of Religious Education, asked me to take the reins of a new RSC project, the Religious Educator. Eventually I moved to the HGB, where I worked with Richard D. Draper, then publications director. When Richard became associate dean, I took his former position. We eventually merged operations for the Religious Educator with the publication of RSC books and the RSC Newsletter. It has been a wonderful ten-year journey—I have learned a lot along the way.

I hope that while browsing the pages of the Religious Educator during the last decade you have been edified—learning something new or something to improve your classroom experience. We have tried to publish essays that would bless not only the lives of those who produced them (writing always seems to clarify one’s thinking on a topic) but also those who would read them. It takes effort to produce three issues each year that will edify both the writer and the reader. Fortunately, we have been blessed with a number of thoughtful and well-written contributions. As I have read them several times before they were published, their messages have influenced me not only in a classroom setting or in my own research and writing activities but also in the way I think and act. Many articles have become classics—both timely and timeless. Of course, the journal would not have become what it is without the efforts of Ted D. Stoddard (associate editor), R. Devan Jensen (executive editor), Brent R. Nordgren (production manager), Joany O. Pinegar (administrative assistant), and the good people at Stephen Hales Creative. Enjoy!