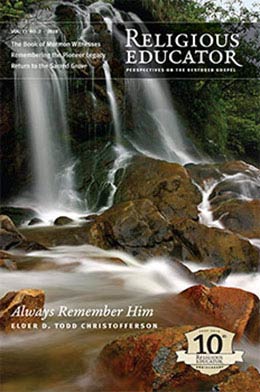 Witnesses—Those Who Assist to Bring Forth This Work

A. Bryan Weston (abjweston@yahoo.com) is a former director of the Hill Cumorah Visitors’ Center, Palmyra, New York, and a former missionary in the New York Rochester Mission. 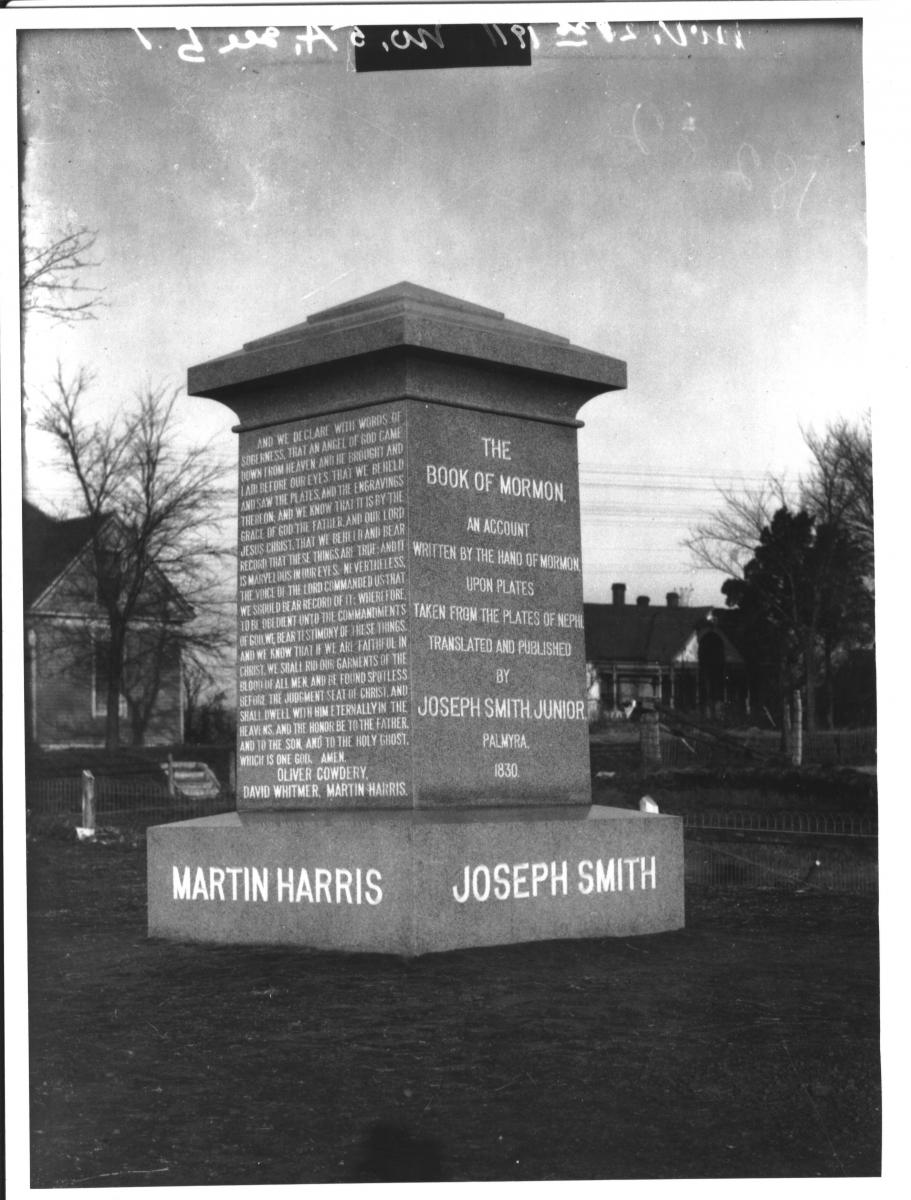 On November, 22, 1911, this monument was dedicated to honor Oliver Cowdery, one of the Three Witnesses of the Book of Mormon. The Three Witnesses helped fulfill an ancient prophecy that "unto three shall they [the plates] be shown by the power of God; wherefore they shall know of a surety that these things are true" (Ether 5:3).

As Joseph Smith was nearing the end of his Book of Mormon translation, working on the pages written by Moroni, he and Oliver Cowdery came across an invitation to share a view of the plates and other items with three witnesses. The Lord had said, "And behold, ye may be privileged that ye may show the plates unto those who shall assist to bring forth this work; And unto three shall they be shown the power of God; wherefore they shall know of a surety that these things are true" (Ether 5:2-3)

In the early history of the Restoration, Joseph described his circumstances and those of his family as “indigent” (Joseph Smith—History 1:46). Accordingly, Joseph would need help in bringing forth this marvelous work. “As my father’s worldly circumstances were very limited,” Joseph commented, “we were under the necessity of laboring with our hands” (Joseph Smith—History 1:55). This put constant stress on Joseph and made it essential for him to find others to assist him throughout these early days of the Restoration (which, incidentally, introduced several potential converts to the young prophet and to the message of the Restoration). Emma was only able to assist for limited time periods as a scribe for her husband.

Martin Harris, who had known the Smith family since their move to Palmyra, had shown interest in Joseph's recovery of the plates. He assisted Joseph and Emma financially in the move from Palmyra New York, to Harmony, Pennsylvania. Harris then provided very welcome relief for the Prophet by acting as the main scribe for the first 116 pages in the Book of Mormon translation. Martin also took the transcription of a few characters from the plates to the Luther Bradish in Albany and professors Charles Anthon and Samuel L. Milton at Columbia College (now Columbia University) in New York city to certify the accuracy of the translation and the authenticity of the characters an endeavor that resulted unwittingly in the fulfillment of one of Isaiah's prophecies (see Isaiah 29:11 and 2 Nephi 27: 15-18).[1] Harris might have helped even more, if not for his wife's opposition.[2] Although Harris was responsible for the loss of the 116 manuscript pages, he continued to support the Prophet and helped again and again. Eventually he mortgaged and later sold part of his farm to guarantee payment to E. B. Grandin for the printing and binding of the Book of Mormon.[3]

Oliver Cowdery first learned of Joseph’s possession of the plates while boarding with the Smith family as he worked as a schoolteacher in Manchester, New York. As soon as the school year was over, he traveled with Samuel Smith to Harmony, Pennsylvania. They stopped en route to pay a brief visit to Oliver’s friend David Whitmer in Fayette, New York. Oliver promised David that he would write to him after he met Joseph to inform him whether Joseph really had the plates.[4] Oliver and Samuel arrived at Joseph and Emma’s home on April 5, 1829. By April 7, Oliver had started to act as scribe for Joseph during translation.[5] This began a remarkable time in the translation of the Book of Mormon. In about sixty to sixty-five days they were able to complete the translation process, with Oliver doing nearly all of the writing for the Prophet.[6]

Soon after Oliver arrived in Harmony, he wrote at least two letters back to David Whitmer, assuring him that Joseph did indeed have the plates and that the story they heard about him was authentic.[7] As the persecution became too intense for the translation process to continue in Harmony, Oliver wrote again to David to ask if they could come to Fayette to finish translating. In the letter he also asked if David could come to Harmony to help them move to Fayette.[8] David's father, Peter Whitmer Sr., gave his son permission to leave– after he finished planting the spring crops

In the next few days, the field that David needed to prepare was miraculously plowed, prepared, and spread with plaster of paris. David’s father noted the blessings they were receiving and told David to hook up his team and go to Harmony. He accordingly went to help the Prophet and Oliver come to Fayette.[9] The Whitmer family became very instrumental in supporting Joseph in the work of the Restoration, both materially and spiritually. Seven of the eleven witnesses to the plates were, or would soon become, part of the Whitmer family (Oliver Cowdery would marry Elizabeth Ann Whitmer in 1832).[10] The Whitmer home eventually became the site of the formal organization of the Church on April 6, 1830.

However, at this point in June 1829, those who would become the Three Witnesses to the Book of Mormon had already given significant help to the young prophet and had "assisted to bring forth the work" (Ether 5:22). In the latter stages of the translation, Joseph and Oliver translated the verse in 2 Nephi [11] that reads, "None shall behold it save it be that three witnesses shall behold it, by the power of God." (2 Nephi 27:12). Joseph later said that as Martin, Oliver, and David were talking with him in Fayette, they asked they asked if they might be the witnesses. Joseph inquired of the Lord and received section 17 of the Doctrine and Covenants. There the Lord confirmed their request and counseled, "And it is by your faith that ye shall obtain a view of them...And after... you shall testify of them, by the power of God;...that I may bring about my righteous purposes unto the children of men in this work" (D&C 17:2–4)[12]

These men became faithful witnesses of the Book of Mormon, of the plates, and of the angel, never denying their testimonies, even when they became disaffected with Joseph and the Church (Martin and Oliver later came back to the Church, but David did not).[13] They had fulfilled three conditions of witnesses: they had assisted in the coming forth of the work, they had desired the privilege, and they remained faithful to their witness through the remainder of their lives.

Although conditions in our day are far different from those in Joseph's, there is still a need for those who will help the Lord in the continual coming forth of this marvelous work. The gospel is still being restored to those who have not yet received it. witnesses are still needed, and when we stand as witnesses, we are blessed. The Lord said, " Behold, I sent you out to testify and warn the people, and it becometh every man who hath been warned to warn his neighbor" (D&C 88:81)

As recorded in section 14 of the Doctrine and Covenants, the Lord told David Whitmer, “And it shall come to pass, that if you shall ask the Father in my name, in faith believing, you shall receive the Holy Ghost, which giveth utterance, that you may stand as a witness of the things of which you shall both hear and see. . . . And behold, thou art David, and thou art called to assist; which thing if ye do, and are faithful, ye shall be blessed both spiritually and temporally, and great shall be your reward” (vv. 8, 11). It seems the same principle applies to each of us—if we will ask the Father in faith for a witness through the Holy Ghost and if we are willing to be faithful in assisting the Father and the Son in bringing forth the work, we shall be permitted to stand as witnesses of the things we “hear and see” through the Spirit. The promise to us would be that we, too, “shall be blessed both spiritually and temporally, and great shall be [our] reward.”

Teachers in the Church must be faithful witnesses as they work with their students in helping to bring forth the Savior's work. If they serve well, and increasing number of their students will " ask the father in faith," that they too may be witnesses.

[1] Harris had asked Smith for a transcription of some of the Book of Mormon characters from the plates, along with a translation, which he would then take to linguistic specialists “in the East” to have them authenticated. It appears that he went to Albany and sought out Luther Bradish, a politician and student of languages, probably for advice about whom to consult for authentication. He then apparently obtained a letter of introduction from Samuel Latham Mitchill, vice president of Rutgers Medical College in Manhattan and former chair of natural history, chemistry, and agriculture at Columbia College, referring him to Charles Anthon, professor of classical studies at Columbia College. Harris and Anthon give conflicting accounts of what occurred during their visit. Harris claimed that Anthon gave him a letter authenticating the characters and the translation but that he tore it up after Harris explained the plates’ origin and their deliverance to Smith by an angel. Anthon later denied that he had done any such thing. Whatever occurred during the interview, Harris returned to Harmony convinced of the Book of Mormon’s authenticity and offered both financial support and personal effort in its publication. See Stanley B. Kimball, “The Anthon Transcript: People, Primary Sources, and Problems,” BYU Studies 10, no. 3 (Spring 1970): 325–52; and Richard L. Bushman, Joseph Smith: Rough Stone Rolling (New York: Knopf, 2005), 63–66.

[2] Though initially enthused about Joseph Smith’s account of his reception of the Book of Mormon, Lucy Harris became skeptical when she was repeatedly denied a view of the plates. Her skepticism gradually turned to stiff opposition. She insisted that Harris obtain the translation manuscript, a demand that Joseph eventually complied with, which resulted in the loss of the first 116 manuscript pages. See Bushman, Rough Stone Rolling, 61–69.

[10] Of the seven, five were Whitmer sons by birth—David, Christian, Jacob, Peter Jr., and John—and two, Hiram Page and Oliver Cowdery, had married or would marry into the Whitmer family. See Bushman, Rough Stone Rolling, 76–79; see also Larry C. Porter, A Study of the Origins of The Church of Jesus Christ of Latter-day Saints in the States of New York and Pennsylvania (Provo, UT: Joseph Fielding Smith Institute for Latter-day Saint History and BYU Studies, 2000), 93.