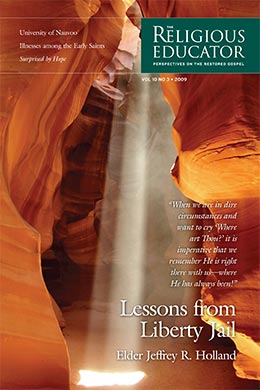 As we complete the final issue of the tenth volume of the Religious Educator, I express gratitude to the many individuals who have joined us on this adventure.

We begin this issue with a thoughtful talk from Elder Jeffrey R. Holland, who established the RSC in 1975.

Increasingly, Latter-day Saints are learning about an archaeological site in Israel purporting to provide evidence for the story at the beginning of the Book of Mormon. We asked Jeffrey R. Chadwick, the only Latter-day Saint trained in biblical archaeology who is also currently working on a dig in Israel, to provide a thoughtful review of the arguments and the evidence.

We then present several articles rooted in the Book of Mormon text: Zachary Nelson’s “The Rod of Iron in Lehi’s Dream,” Deanna Draper Buck’s “Internal Evidence of Widespread Literacy in the Book of Mormon,” Anthony Sweat’s “Active Learning and the Savior’s Nephite Ministry,” and “Peaceable Followers of Christ.” Next, Allan Rau helps us with his article, “Fostering Conversion through Faith-Inspired Actions.” John Hilton adds another excellent contribution with “See That Ye Do Them.” BYU continues its efforts to extend its influence beyond the Church audience; in an interview, we introduce readers to James E. Faulconer, who is making a difference in this area.

As we conclude our study of the Doctrine and Covenants in Gospel Doctrine, we present several articles explaining medical terms and illnesses in the nineteenth century. Nathan Welch, my former research assistant and now a medical doctor, has examined Joseph Smith’s 1813 illness. Joseph B. Hinckley, another research assistant who is now in law school, has written “Saints and Sickness: Medicine in Nauvoo and Winter Quarters,” which serves as an introduction to a piece called “Medical Terms Used by Saints in Nauvoo and Winter Quarters, 1839–48,” by Douglas C. Heiner, Evan L. Ivie, and Teresa Lovell. Ivie and Heiner add another helpful study, “Deaths in Early Nauvoo, 1839–46, and Winter Quarters, 1846–48.”

Scott C. Esplin considers how hard it must have been for those early Kirtland Saints to move to Ohio and then on to Missouri. Susan Easton Black then provides insights to the University of Nauvoo. You will then find part 2 of our roundtable discussion on the Doctrine and Covenants with content experts J. Spencer Fluhman, Steven C. Harper, Grant Underwood, and Robert J. Woodford.

N. T. Wright is well known among New Testament scholars and many Protestants, but less known among the Saints. To rectify that, Bob Millet provides us an excellent introduction to one of Wright’s recent works, Surprised by Hope (2008), giving us some food for thought.

Finally, we introduce you to Chad H. Webb, the new director of Seminaries and Institutes, with an interview conducted by Kenneth L. Alford.

I hope you will find something of value in this issue. Enjoy!