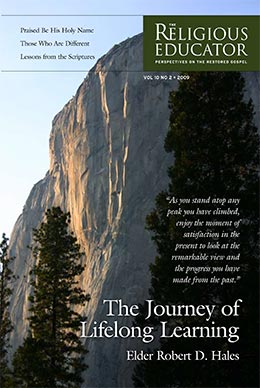 Praised Be His Holy Name 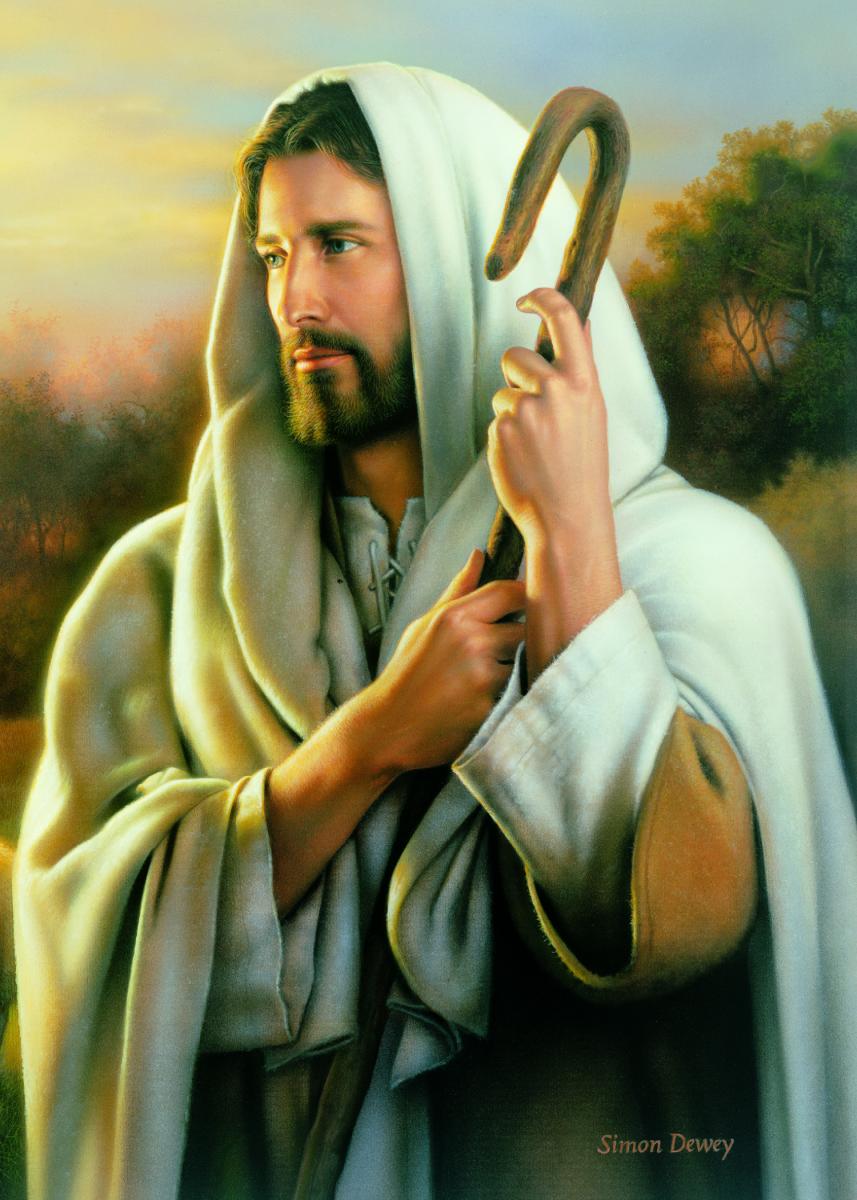 The purpose of this piece is to praise the Lord, not to inform or enlighten. Any informing or enlightening is strictly coincidental.

John the Baptist said, “Behold the Lamb of God” (John 1:29). There is no mortal language adequate to describe the Lord; however, in the holy scriptures there are scores of names by which he is designated. Here we will mention or discuss only a few of them.

Regarding his mortal life, chronologically speaking, the earliest name for him is the Firstborn. Obviously that is because he was the first spirit offspring of our Heavenly Father (see Colossians 1:15). Therefore, he was, and is, the Firstborn (see D&C 76:54).

Not only was he the Firstborn, but when plans were discussed for Heavenly Father’s children to leave their spirit existence and become mortal by taking upon themselves bodies of flesh and bones, it was he who protected their agency and said, “Father, thy will be done, and the glory be thine forever” (Moses 4:2), thus assuring the continuation of mankind’s agency as mortals. In doing so he first manifested himself as our Advocate with the Father (see D&C 110:4). Of course, he continues to be our Advocate, intervening and pleading for us.

When the time came for God’s spirit children to begin to leave his presence, the Lord became their Creator, which name contains a multitude of ramifications (see D&C 45:1). This name or title contains so many dimensions it is beyond our comprehension, yet when we call him the Creator we do so with such ease, usually without beginning to realize the length and depth of what we are saying.

As Adam and Eve began their course on the earth, Adam was told that in his language “Man of Holiness” is the name of God and that his Only Begotten Son is named “the Son of Man, even Jesus Christ” (Moses 6:57). Therein God answered the much-argued question, what is the difference between the names “Son of Man” and “Son of God”? There is no difference. They mean the same thing.

Throughout the Old Testament period, the premortal Lord was known as Jehovah. Even in the last verse of the Book of Mormon, Moroni refers to him as “the great Jehovah, the Eternal Judge of both quick and dead” (Moroni 10:34).

That is perhaps the most basic name of God in the English language. There is a branch of philosophy called ontology. The study examines the ways different things are said to exist or, one might say, the ways in which things are said to be. The first-person singular of the verb to be is “I am.” Thus, the root or basis of all things is the existence of God. He declares such in his name I AM THAT I AM, or I am he who exists.

When the Lord was born of Mary, he became known as Jesus of Nazareth (see Mark 1:24). During his ministry many other names or titles were employed, such as the Way, the Truth, and the Life, or the Bread of Life, the Living Water, the Good Shepherd.

In performing his mission at the end of his mortal life, he accomplished the incomparable, infinite Atonement, followed by the glorious Resurrection, wherein he became “the firstfruits of them that slept” (1 Corinthians 15:20). He was the Christ, the Lamb of God, the Redeemer, the Deliverer, the Holy One.

Then came the long-awaited visit to the spirit world, where he ministered to the righteous as their Liberator and Savior and inaugurated the means of taking the gospel to Heavenly Father’s children in the spirit world (1 Peter 3:18–20).

When he returned to the highly favored disciples as their resurrected Lord, he initiated his forty-day ministry, during which we have reason to believe he introduced some of the most sacred principles, ordinances, and covenants belonging to the gospel (see Acts 1:3).

Sometime after those forty days, he visited the Nephites in their promised land. After Heavenly Father’s voice was heard introducing his Holy Son, the Lord declared, “I am the God of Israel, and the God of the whole earth, and have been slain for the sins of the world” (3 Nephi 11:14). Also, in discussing the law of Moses, he said, “I am he that gave the law, and . . . the law in me is fulfilled” (3 Nephi 15:5). Not only did he say, “The law which was given unto Moses hath an end in me,” but he declared, “Behold, I am the law” (3 Nephi 15:8–9).

Upon leaving the Nephites, he visited his “other sheep,” who were not of that land, nor of Jerusalem, nor of “any parts of that land round about whither . . . [He had] been to minister” (3 Nephi 16:1). The next event of which we know in the Lord’s work was the magnificent First Vision, inaugurating the marvelous Restoration of the gospel. Heavenly Father called Joseph by name, then personally introduced the Lord to him by saying, “This is My Beloved Son. Hear Him!” (Joseph Smith—History 1:17).

At the end of this dispensation comes the greatly forecast Millennium. Paul the Apostle gave us appropriate titles for the Lord for that period, the “only Potentate, the King of kings, and Lord of lords” (1 Timothy 6:15).

Presumably the next logical title for the Lord is the Judge, or as Moroni called him, the Judge of both quick and dead (see Moroni 10:34). Here again is an explicit time that he is our Advocate. In modern revelation he said: “Listen to him who is the advocate with the Father, who is pleading your cause before him—saying: Father, behold the sufferings and death of him who did no sin, in whom thou wast well pleased; behold the blood of thy Son which was shed, the blood of him whom thou gavest that thyself might be glorified; wherefore, Father, spare these my brethren that believe on my name, that they may come unto me and have everlasting life” (D&C 45:3–5).

Actually, there are scores of names by which the Lord is called. A few other examples are the Word, the Word of God, the Savior, the Messiah, the King of Zion, and the Prince of Peace. In the Book of Mormon alone there are not only scores of references to Deity, but there are well over one hundred different names or titles. Legion are the ways man has tried to praise and worship him.

It is a wondrous and glorious blessing to know that he is. Our indebtedness to him is incomprehensible, and yet we all struggle to express our awareness of his majesty and of our deep limitations. We honor, praise, and worship him, yet we know his greatness defies all mortal language. He lives. Because he lives, we live. Because he lives, we will live forever. I know he is our Redeemer. May we ever feel his presence.