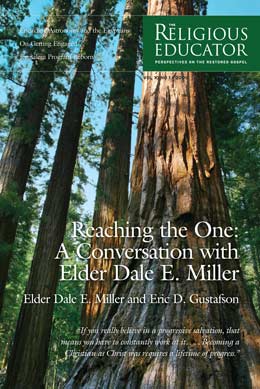 Having Problems with Prayer Language?

Roger K. Terry (roger_terry@byu.edu) was the senior associate editor of BYU Studies when this was written. 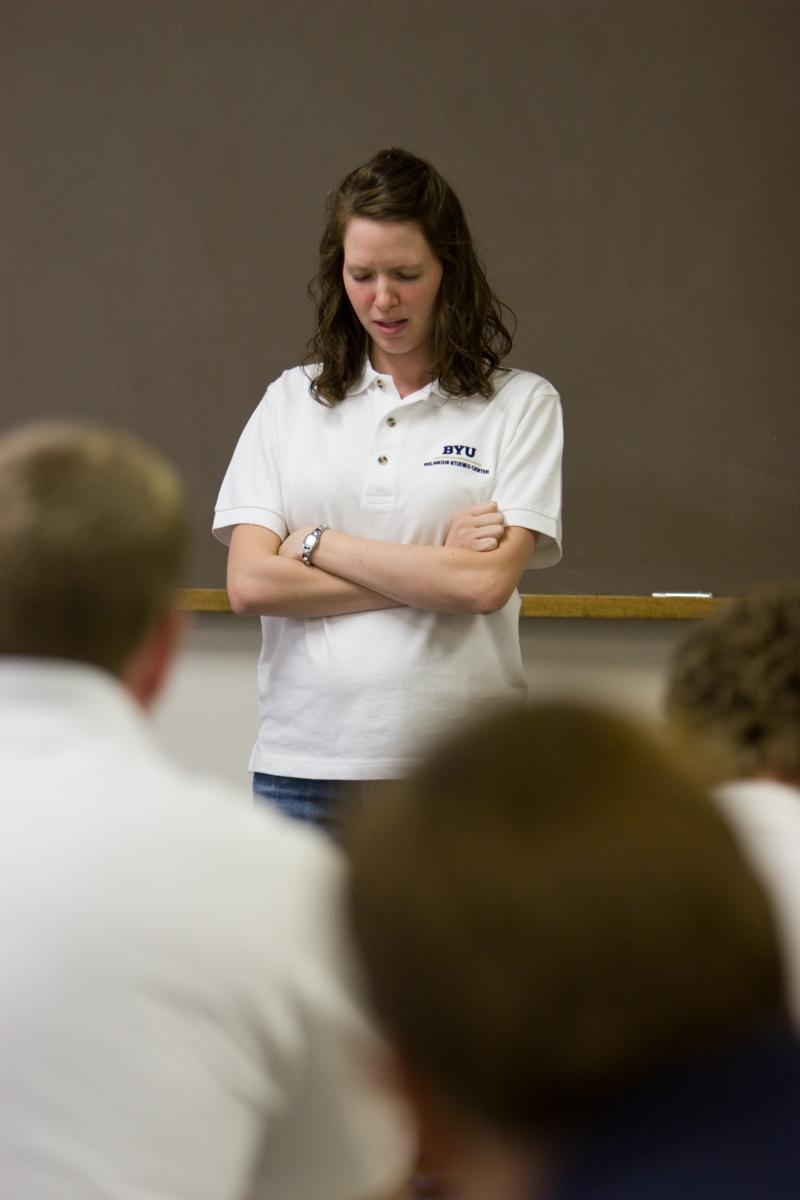 Respect is more a function of attitude, posture, and tone of voice than of grammar. Courtesy of Richard B. Crookston.

Have you ever been called on to pray in a class or a meeting and found yourself stumbling over archaic pronouns or verb conjugations no longer used in everyday English? Is it “Thy approval” or “Thine approval”? Is it okay to say “Thou might”? When do I say “Thou dost,” and when do I say “Thou doest”?

Most languages do not present this problem. German speakers, for instance, address Heavenly Father as they would address a family member or close friend. Interestingly, because English is a Germanic language, many of the familiar forms in German are very similar to the archaic English forms we use in prayer. But in German these forms are still used every day in conversation, whereas in English they have almost completely vanished from common usage.

As Latter-day Saints, we often receive reminders from our leaders to use “prayer language.”1 Most members desire to follow this counsel, but they struggle. Why? Because in spite of all the reminders to use prayer language, no one teaches them how. Actually, it’s not that difficult, and a few shortcuts even make it possible to avoid the most common stumbling block: tricky verb conjugations. Let’s take a brief look at some of the forms we use in prayer.

“Thou art kind and gracious.” (subject)

“Wilt Thou bless us with safety as we travel.” (subject)

“We love Thee and Thy Son.” (direct object)

“We give Thee thanks for our blessings.” (indirect object)

“We have faith in Thee.” (object of the preposition in)

Likewise, we should use the possessive pronouns Thy and Thine in prayer rather than You and Your. The difference between the two forms is identical to the difference between the indefinite articles a and an. If the word following the possessive pronoun begins with a consonant (or a vowel that behaves as a consonant, such as in universe or usual), use Thy. If the word begins with a vowel sound (abundance, authority, unsurpassed), we use Thine.

“Thou hast restored Thy Church and Thine authority in these latter days.”

“Watch over us with Thy loving care.”

This is where most people struggle, because the archaic forms in English, just as the modern forms, do not always follow the rules. The rule is that you add an ending to any verb following the pronoun Thou. The ending is –st or –est for most verbs. Thus, we would say:

“Thou givest us bountiful blessings.”

“Thou speakest the truth.”

“Thou takest from us our sorrows.”

Of course, English always presents exceptions. In verb conjugations using the pronoun Thou, these exceptions involve to be and to have as well as several auxiliary verbs (verbs such as may, can, or shall that modify the main verb). Since there is no consistency here, we must simply memorize the correct forms. For instance, we say:

“Thou art kind and generous.”

“Thou hast given us great blessings.”

“Wilt Thou bless our home with Thy Spirit.”

But we also say:

“Thou canst not lie.”

“We ask Thee that Thou mightest bring peace to our souls.”

“We have gathered to worship Thee today that Thou mayest know of our love for Thee.”

Common Verb Conjugations with Thou
Dost and Doest

What is the difference between dost (pronounced like dust) and doest (two syllables, the first pronounced like dew)? From reading the scriptures, most Latter-day Saints probably have a fairly accurate (though perhaps intuitive) sense for this. The former is an auxiliary verb and always accompanies the main verb in the clause. Examples are:

“When thou dost lend thy brother any thing” (Deuteronomy 24:10).

“Thou dost bless us when we obey Thy word.”

The latter form is the second-person, present-tense conjugation of the active verb to do. It is used when no other verb is present in the clause. Examples of its usage are:

“If Thou doest this in our behalf, we thank Thee.”

Some may also wonder about the form doth that appears often in scripture. Doth is the archaic third-person conjugation of do. Thus, we read in scripture, “Ye know not what hour your Lord doth come” (Matthew 24:42). Doth, just like dost, is only used as an auxiliary or helping verb. When used as the main verb, the correct third-person form would be doeth, as in “Let not thy left hand know what thy right hand doeth” (Matthew 6:3).

Some people might still be uncomfortable with adding the –st or –est endings to verbs, or perhaps they can’t ever seem to remember that the correct conjugation of will is irregular (wilt). If this is so, they can avoid this dilemma altogether by using the command form. For example:

“Bless us with Thy Spirit.”

Using the primary verb in its infinitive form (to + verb) is also a method some people use to avoid the confusing verb endings. Examples of such phrases are:

“We ask Thee to bless us with Thy Spirit.”

“We ask Thee to protect us from evil.”

Some people also select an auxiliary verb (usually wilt) and use it almost exclusively.

“Wilt Thou grant us Thy love.”

“Wilt Thou bless this class.”

“Wilt Thou forgive us our sins.”

Although these sentences look like questions, they are actually command forms, with an auxiliary verb added to soften the effect.

Some Church members might wonder why we use the archaic forms when addressing our Heavenly Father but are not consistent in using similar forms when referring in prayer to other people or things. For example, why don’t we say, “Father, wilt Thou bless Brother Wilkins. He hath lost his job and needeth employment”? Probably because it sounds unnatural, even humorous, in our day and would draw attention to the language itself and away from that for which we are praying.

Of course, the question might also be asked, Why don’t we just do away with the archaic forms and use You and Your, our modern familiar forms? To this question I have no reasonable answer, since members of the Church who speak other languages generally address their Heavenly Father in an intimate, personal manner just as they would address a family member or close friend. It can even be argued that the archaic forms we use in English actually place a barrier of artificial and awkward formality between the supplicant and his or her Father. We often hear that these forms show proper respect for Deity, but does that mean it is impossible for German- or French-speaking members to show appropriate respect in their prayers? Of course not. Respect is more a function of attitude, posture, and tone of voice than of grammar. I suppose the only answer to this difficult question is that as long as our leaders counsel us to use the archaic forms, we ought to comply and learn how to use them correctly.

Using the Scriptures as a Pattern

We can become familiar with the language of prayer and its correct forms by reading the scriptures, particularly the King James version of the Bible. The King James Bible is also widely considered a masterpiece of English literature because of its beautiful prose. The Book of Mormon, by contrast, is somewhat inconsistent grammatically but can still serve as a pattern for prayer language in most instances.

By paying closer attention to the language itself as we read, we can become more familiar with the forms and usage of this now archaic English and expand our vocabulary of appropriate words and expressions we might use in prayer.

As mentioned above, other languages, such as French and German, have no archaic form that might by its rare usage connote respect or reverence. God is addressed with the familiar pronouns used among family members and close friends. In such languages, individuals show respect and reverence through tone of voice, sincerity of heart, and humble posture.

These signs of reverence are more important, of course, than correct grammar or even the use of “prayer language.” The honest but ungrammatical prayer of a humble son or daughter is certainly more pleasing to our Heavenly Father than the eloquent but pretentious prayer of the learned. If we can learn, however, to express ourselves effectively and correctly and still remain sincere and humble, we will be more able in our public prayers to speak appropriately for the class or congregation