The nation of Austria in 1938 consisted essentially of a remnant of the Hapsburg Empire that had been known since 1866 as the Austro-Hungarian Empire. The Treaty of Versailles that concluded the Great War of 1914–18 took more than 80 percent of the empire’s territory for the establishment of several new nations. The Austria that remained was the German-language territory of old; its neighbors were Germany to the northwest, Switzerland and Liechtenstein to the west, Italy to the southwest, Yugoslavia to the south, Hungary to the east, and Czechoslovakia to the northeast.

The government of the fledgling Austrian republic proved itself incapable of leading the nation to prosperity, and it came as no surprise that Austrians overwhelmingly voted to be annexed to Germany several times in the early 1920s. Of course, the League of Nations in Geneva would not allow such a union, and the country continued to lag behind Germany in economic growth. By the time Hitler’s army marched across the borders into Austria on March 12, 1938, in yet another bloodless German conquest, many Austrians had become National Socialists in secret and were hoping that Germany would rescue their country soon from their sorrowful plight. The Wehrmacht troops that streamed across the border that morning were welcomed almost everywhere as liberators. Days later, Hitler appeared in person at the Heldenplatz in front of the Hofburg Palace in Vienna and was hailed by hundreds of thousands of Austrians as their new leader. 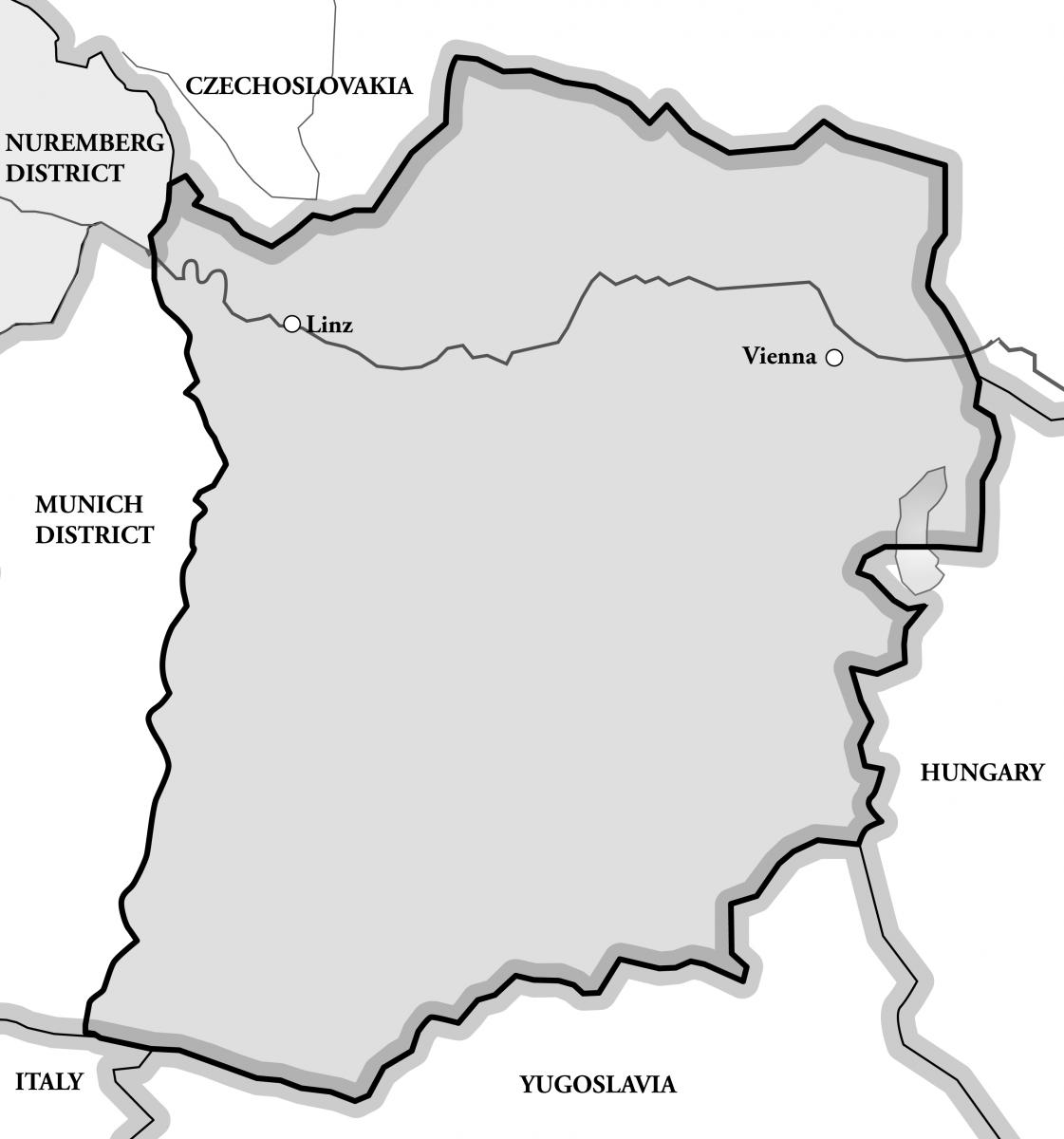 Fig. 1. The territory of the Vienna District was vast but mountainous and sparsely populated in 1939. There were no branches of the church to the east or south of Austria.

The Anschluss [annexation] was the most momentous event in Austria between 1918 and 1945. Essentially all Austrians born before 1930 who are still alive remember where they were at the time. Below are the recollections of Latter-day Saints in three branches of the Church in Austria:

[The Anschluss] brought many changes and transformations. Part of the citizens cheered the change and others expressed fearful apprehensions. At first things looked friendly! Suddenly there were no more unemployed! A sudden economic upswing, but it was unexplainable. However, soon we saw the other side of the coin. The first persecution of the Jews had started. . . . In my job the annexation was at first an advantage. The fish sales went up five times and it made an end to our constant need to conserve. [1]

Before the Anschluss, we could never travel to Germany. After that, we could go to Munich and Nuremberg for [church] conferences. [2]

Swastika flags were hoisted and Nazis that had joined the party illegally in Austria between 1933 and 1938 surfaced and became quite active. . . . I kept on selling to my Jewish customers. . . . Traffic was changed from the left to the right as it was in Germany. Unemployment became rare and business picked up. The German salute “Heil Hitler” became the usual and the Nazis grew quite obnoxious. [3]

I had been without work for five years. Austria then became Germany on March [13]. I remember that everybody was excited because it meant that good things would happen and that conditions would be better for all of us. Everybody went to see Hitler speak. . . . I was not there in person, but I listened to it over the loudspeakers that were mounted in the trees. [4]

We often heard that it would be good if everybody was finally able to get work and that Austria and Germany would be a larger territory now. . . . It did not bother us teenagers that Austria had a different name [Ostmark] all of a sudden. Maybe it bothered older people. [5]

I saw Hitler when he raised his hand [in the Nazi salute] and the people cheered him and I was there. I [cheered] too but not like most of the other people. . . . I was walking down the street when a Jehovah’s Witness spoke to a man who was really yelling loud: “What will you do when Jesus Christ comes? Will you make this much noise for him?” The man answered, “Sure! Let him come!” [6]

On the day Hitler came to power in Austria, I was sent home from school because it was assumed that with my name, Hirschmann, I was Jewish. My father went to the school and explained to the administrators that we were in fact not Jewish. With this, they agreed to let [my brothers and me] return to school. [7]

I remember when the German soldiers went through the town and the big tanks roared through the streets. It was very exciting and frightening. At first things looked friendly. No more unemployed people. [8]

I came home from school [that day] at lunchtime. My mother . . . was listening to the radio and she was crying; she was usually not that emotional. And as a child I was worried; I wondered what the problem was. I only remember her saying that [the Nazis] had taken Mr. Schuschnigg, who was the [Austrian] chancellor, and that the Nazis were going to take care of the country. She was trying to explain this to me a ten-year-old, but I did not understand what was going on. She said that force would be answered by force. [9]

The Church of Jesus Christ of Latter-day Saints had existed in Austria since the end of the nineteenth century, but only five branches were functioning in 1938: Vienna, Linz, Salzburg, Frankenburg, and Haag am Hausruck. Prior to January 1, 1938, those branches belonged to the German-Austrian Mission that was administered from Berlin, Germany. With the new year, a realignment of borders resulted in the establishment of the Swiss-Austrian Mission with headquarters in Basel, Switzerland. However, due to the increasing difficulties encountered by American missionaries moving across the border between Switzerland and Austria after the Anschluss, as of November 1, 1938, missionary administration in Austria would be moved to the West German Mission that was directed from the office in Frankfurt.

A district conference was held in Vienna on May 13–14, 1939, under the theme “Know the truth, and the truth shall make you free.” District president Georg Schick presided at the conference. The attendance was recorded as follows: first session, sixty-five members and friends; leadership meeting, forty; Sunday School conference, seventy-one; fourth meeting, fifty; priesthood meeting, twenty-one; Relief Society meeting, thirty-one; and at the main session, seventy-four. [10] The mission history contains this statement regarding the conference: “Although the attendance in this district is not so large the audience was one of the most enthusiastic in the mission. All meetings were carried through in the regular order.” [11]

During the conference it was announced that the district was to be disbanded. As of May 14, the presidents of the Linz and Vienna Branches were to answer directly to mission president M. Douglas Wood in Frankfurt. The small branches of Salzburg, Frankenburg and Haag am Hausruck were moved to the Munich, Germany District—principally because transportation to Munich was much more convenient than to Vienna. Georg Schick was released as district president after serving for six years. [12] The independent status of the Linz and Vienna Branches remained unchanged throughout World War II.

There are no official numbers for the populations of Saints in Linz and Vienna for the year 1939. Because of the transfer from one mission to another, reports sent to Salt Lake City after 1937 show only district membership. At the end of 1937, there were 281 members in the five Austrian branches. The three branches moved to the Munich District had a total of 120 members at the end of 1939, leaving approximately 160 in Linz and Vienna. Linz probably had only about thirty members on record, and Vienna perhaps 130.

Heinrich M. Teply described the condition of the Church in eastern Austria during the early war years in these words:

For the most part the programs of the Church were carried out as before. Some of the terms had to be changed, such as Versammlung [meeting] to Gottesdienst [worship service] and Verein [society] to Klasse [class]. But those were just superficial changes. Of course, we were disappointed by the lack of literature and instructional materials, but we learned to get by with what we had. The West German Mission office tried to send us as much material as they could throughout the war years. In times of need, the members helped each other out. Families who lost their homes in air raids were taken in and cared for by others. In this regard the greatest assistance came from members in Upper Austria [Haag and Frankenburg Branches] who were less negatively affected by the war. Severe shortages were rarely the case, because the government provided the basic necessities right up until the end of the war. [13]

When World War II began on September 1, 1939, the Austrians found themselves in a contradictory situation: they were officially German citizens due to the Anschluss but were considered by the rest of the world to be victims of oppression—a conquered and occupied nation. The fact that the name Austria was replaced by Ostmark (the eastern realm) on German maps rankled many Austrians. However, some, including some members of the LDS Church, enjoyed their new status as citizens of a powerful country with an apparently promising future. At the same time, Austrian men did not always relish the idea of fighting battles in countries far away or dying for “Führer, Volk, und Vaterland.”

Branch conferences of the Church were held in Vienna on a regular basis after the war began. A Sunday School conference was attended by fifty persons in February 1941, and one month later, forty-five persons attended a Relief Society conference. A spring mission conference was held on June 7–8, 1941, under the leadership of mission supervisor Christian Heck, and several Saints from Austria took the train to Germany to participate. Branch leaders from Linz and Salzburg attended a conference in Munich in the fall of 1941. Mission records indicate that conferences were held in Vienna on April 3–4, 1943, and on October 2–3, 1943; mission leaders Christian Heck and Anton Huck presided, and Johann Thaller, president of the Munich District, was also in attendance. [14] It is clear that contacts with other districts and with the West German Mission office in Frankfurt were carefully maintained as long as possible.

At the conclusion of the war, Austria was divided into four regions for occupation by the victories nations of Great Britain, the United States, France, and the Soviet Union. In the confusion, contact with the mission office in Frankfurt was interrupted, and the leaders of the five LDS branches in Austria wondered how they should proceed. They met in Haag am Hausruck in the summer of 1945 and decided to establish an Austrian administration of the Church; Anton Cziep of Vienna was selected as the leading elder of the organization until such time as the Church leadership in Salt Lake City could reestablish contact and provide instructions. This status prevailed only until May 1946, when Elder Ezra Taft Benson arrived to organize the Vienna District with Brother Cziep as president. [15]

The members of the five branches in Austria had fared somewhat better in the war years than their friends in the German branches, but there were losses and privations to overcome. Only the Linz Branch was without a real meeting venue in 1945, and all five branches were holding regular meetings. The spirit of the Church in Austria was very good, and several new branches were established in the next few years.