At the outset of World War II, there were no organized branches in the province of Alsace-Lorraine, France. The territory was located on the west bank of the Rhine River and also bordered Germany’s Palatinate and Rhineland provinces. The provinces changed hands between Germany and France several times and since 1918 has belonged to France. Most of the residents in the area spoke German, and both the Catholic Church and Protestant churches were well represented. In order to protect the region (and their entire nation, for that matter), the French had constructed a sophisticated line of defenses known as the Maginot Line. Located just a few miles from the German border, it was designed to stop any German attack. In May 1940, the German military disregarded the Maginot Line and simply moved around it, attacking France across the Belgian border to the west and conquering the Maginot Line from behind. The territory of Alsace-Lorraine was then placed under German military and political occupation authorities. 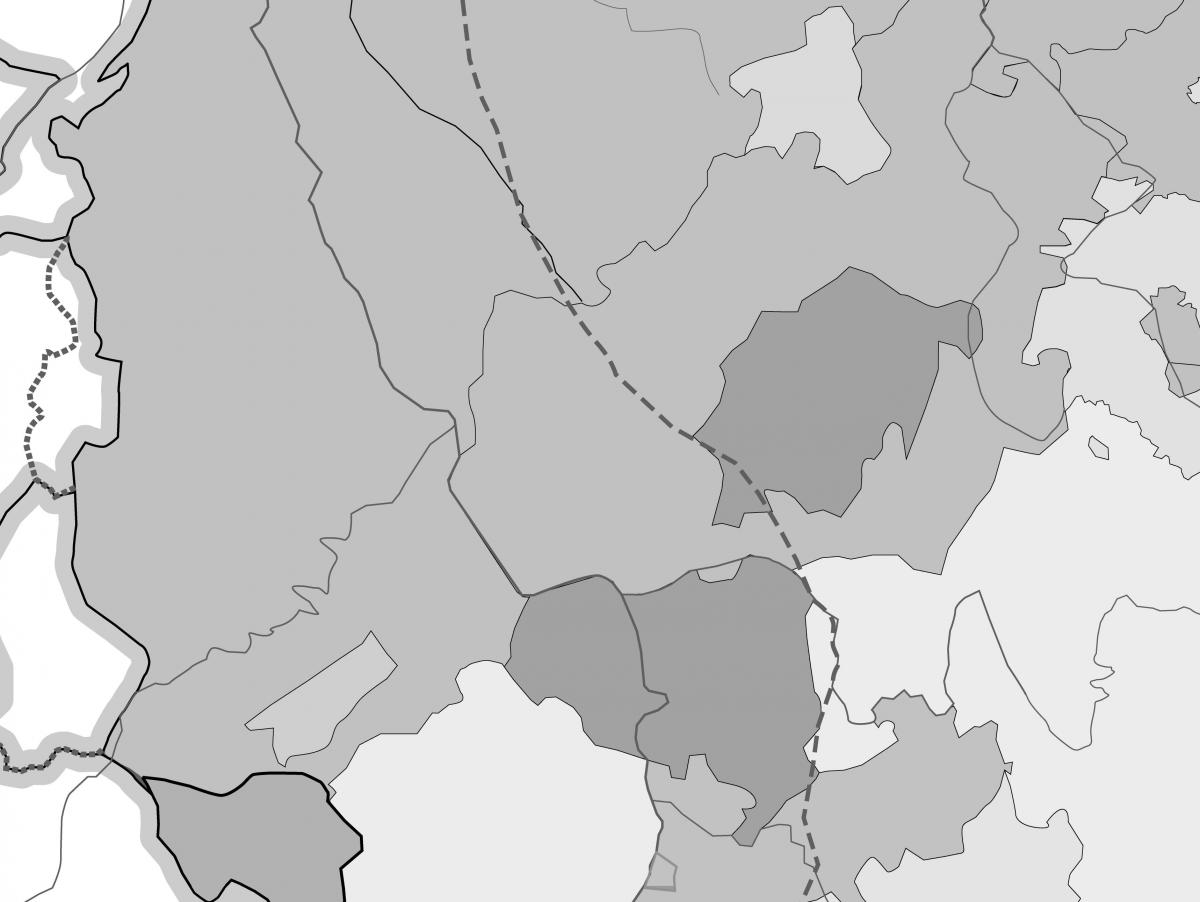 Fig. 1. The Strasbourg District consisted of Alsace-Lorraine in German-occupied France and a small portion of southwest Germany. It was the only district to be established in either German mission during the war.

During the first few years of the war, reports regarding branches in Alsace-Lorraine arrived in the mission office in Frankfurt. Mention was made of Latter-day Saints in the capital city of Strasbourg on the Rhine River and in Mülhausen (French: Mulhouse) to the south. The general minutes of the Bühl Branch (Karlsruhe District) report a number of activities undertaken by Bühl members and their counterparts across the Rhine in Strasbourg. [1] The first such report was dated March 3, 1942: Anton Huck (first counselor to the mission supervisor) conducted a funeral for a sister Maria Kuester in Strasbourg and two members of the Bühl Branch attended the service. On April 26, 1943, eleven Bühl Saints and eight from the Strasbourg Branch had a party at the home of the Paul Kaiser family in Grüneberg, near Strasbourg.

The arrival of Kurt and Charlotte Schneider in Strasbourg in 1940 was the decisive factor in making the Church better known in Alsace-Lorraine. Brother Schneider had served a full-time mission in the Swiss-German Mission a few years earlier and was a devout Latter-day Saint who never tired of telling friends and acquaintances about his beliefs. It appears that he also enjoyed a close relationship with mission leaders at the time. It is very probable that the Schneiders used Kurt’s company automobile (with a chauffeur) to facilitate religious and social interaction with the members of the Bühl Branch (just twenty-five miles northeast) and the Mülhausen Branch (fifty miles to the south) as well as with Latter-day Saints scattered among towns on both sides of the Rhine River. In every regard, Kurt Schneider was the right man to serve as the first (and only) district president.

The fact that Kurt was the director of the Thyssen Company’s Strasbourg division did not mean that he was immune from suspicion under a government that kept close tabs on its citizens. Kurt had a radio hidden behind a secret panel in his company office and used the radio to listen illegally to enemy broadcasts. One day, he was prompted to change the dial to a German station just before turning it off. He recalled what happened next:

About the time I was ready to leave my office again, two tall Nazi SS men in black uniforms with the swastika on their sleeves and guns in their belts entered my office. One leaned against the wall and touched the exact spot in the paneling which opened the secret compartment hiding the radio. They acted surprised, but I could tell that they had been tipped off. One of them reached over and turned on the radio, which began playing music from the German station in Stuttgart. Had the “Voice of America” still been on, they would have taken me away to be executed without further delay. . . . An answer to our prayers and exercises for protection? Yes! [2]

In August 1943, a new meeting place for the Strasbourg Branch was dedicated under the leadership of Anton Huck. Eleven members of the Bühl Branch were in attendance, as were forty more members from the branches of Frankfurt, Saarbrücken, Karlsruhe, Mannheim, Pforzheim, and Freiburg. Paul Kaiser was the branch president in Strasbourg.

On December 12, 1943, Anton Huck presided over a meeting in which a new Strasbourg District was established, which included the neighboring branch in Bühl. [3] The only Alsace-Lorraine branches named in the record were those in Strasbourg and Mülhausen. [4] For the next year, several more activities involving Saints in occupied France and Bühl were reported in the Bühl Branch minutes.

In his company car, Kurt Schneider was able to visit the Saints in and around Strasbourg. His wife’s diary notes excursions to such places as Mülhausen, Saarbrücken (in Germany), and Saarburg. Brother Schneider also used the car to drive to conferences in several cities in Germany, such as Frankfurt, Mannheim, and Karlsruhe. Due to the close relationship the Strasbourg Saints enjoyed with the members of the Bühl Branch, the Schneiders also traveled to that town and to Biberach and Lahr, where Bühl Branch members lived. They also visited isolated Church members in Zebelnheim and Freiburg in Germany.

On January 20, 1944, Kurt Schneider founded the newest branch of the Church in Germany in the city of Freiburg. The events of one week in February 1944 give a glimpse into the Church service rendered by Kurt Schneider and his family. On Tuesday, February 22, Anton Huck came from Frankfurt for a discussion with President Schneider. [5] On Thursday, the Schneiders drove their car north to Saarburg. According to Sister Schneider, “We were in the Schmidts’ home this evening for dinner and for the night. We slept on the sofa because there was no bedding in the hotel. Late in the evening huge squadrons of airplanes flew over the city. I was scared because there were no shelters [close by].” The next night, enemy planes returned to Saarburg: “We sat in a shelter for awhile and heard bombs and saw illumination flares.” Her diary entry the next day shows that they were already home again. The report was more encouraging: “We had a baptism today in the indoor swimming pool: Herr Dietlin and his wife. Then sacrament meeting; afterwards seven members from Mülhausen came to our apartment.” It was a happy ending to a busy week. 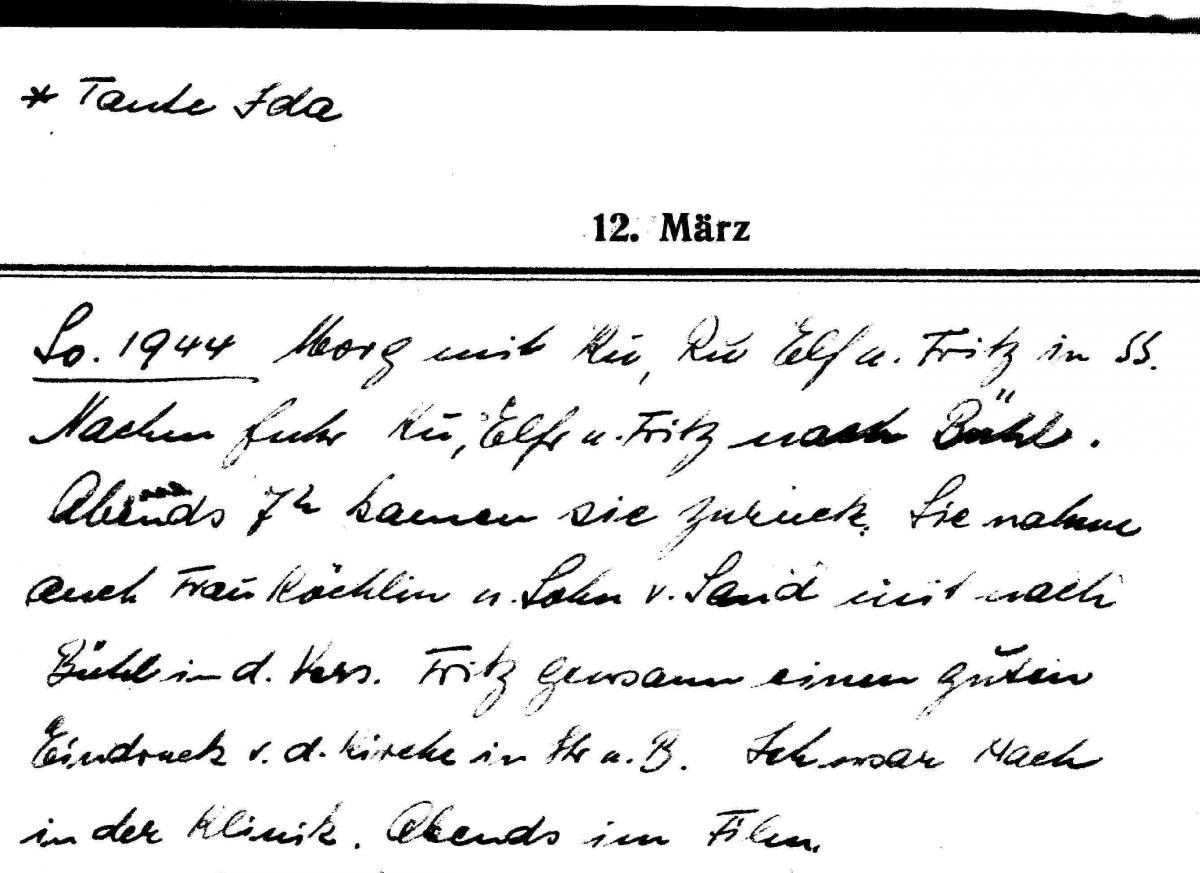 Fig. 2. Charlotte Schneider made this entry on March 12, 1944: “This morning to Sunday School with Kurt, Ruth, Elfriede, and Fritz. Kurt drove Elfriede and Fritz to Bühl this afternoon. They returned at 7 p.m. They also took Mrs. Röcklitz and her son from Sand to the meetings in Bühl. Fritz was impressed by the Church in Strasbourg and Bühl. I went to the hospital [with Werner] and went to a movie this evening.” (C. Bodon Schneider)

During the spring and summer of 1944, President Schneider visited several branches in both Germany and Alsace-Lorraine, sometimes accompanying Anton Huck, who by then was functioning as the mission supervisor. On the first weekend of June, the Schneiders hosted a two-day district conference. Charlotte did not indicate in her diary how many persons attended, but it appears that the conference was a success. Some Saints came from as far away as Stuttgart to participate in the event.

Kurt Schneider was a tireless worker whose influence spread over an ever-increasing area during the last year of the war. In July, Richard Ranglack (supervisor of the East German Mission) visited Strasbourg, and President Schneider reciprocated with a trip to Berlin in July. He met with the leaders of the East German Mission and attended meetings in several branches in the Reich’s capital city. According to Charlotte, Kurt was very impressed with the Saints in the other German mission.

When the American army advanced toward Strasbourg in the late summer of 1944, Kurt Schneider received permission from his company to move his family to the town of Schönwald, in Germany’s Black Forest. The move was not very far (forty-five miles), but it took them back into Germany and made it nearly impossible for him to maintain contact with members of the Church on the other side of the Rhine. The reconquest of Strasbourg by the Allies returned the provinces of Alsace-Lorraine to France and made Germans like Kurt Schneider unwelcome there.

The Schneiders arrived in Schönwald on August 26, 1944. [6] For the duration of the war, President Schneider devoted his efforts to his employer and to his family. Contact with the Saints became a rare event, but Kurt Schneider found many opportunities to discuss the gospel with people everywhere he went.

On November 6, Kurt received a telegram indicating that he was to report for military duty by November 8 “at the latest.” Another telegram arrived on November 9 with instructions to report immediately. He disregarded both messages, but nobody inquired about his lack of obedience.[7] Two months later, he became quite ill and had to be admitted to the hospital in Triberg (three miles north of Schönwald). While there, he was visited by his wife and August Flad, of the Bühl Branch, who came to give him a priesthood blessing. Although seriously ill, Kurt was able to write a missionary tract, which his wife edited for him.

In early May, Kurt was arrested by French authorities and incarcerated for more than two weeks under (at times) harsh conditions. Once the French had collected sufficient evidence to determine that he was neither a soldier nor a dedicated National Socialist, he was released and sent home to his wife and his son in Schönwald.[8]

Of the three branches of the Strasbourg District, only the Bühl Branch in Germany was definitely holding meetings at the end of the war. It is not known whether the same was true of the Saints in Strasbourg or Mülhausen.

[4] No reports have been found regarding the branch in Mülhausen.

[8] See the details of his sixteen days as a prisoner of the French in the Strasbourg Branch chapter.