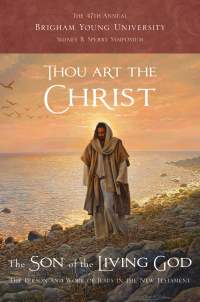 Thou Art the Christ, the Son of the Living God

The Person and Work of Jesus in the New Testament

While Jesus and his disciples were at or near Caesarea Philippi, Peter shared his witness that Jesus was “the Christ, the Son of the living God” (Matthew 16:16; parallels Mark 8:29; Luke 9:20). Martha had a similar divine testimony, proclaiming at Lazarus’s death, “I believe that thou art the Christ, the Son of God, which should come into the world” (John 11:27). In much the same way, a standard part of Latter-day Saint discourse includes bearing testimony that “Jesus is the Christ,” but what do we mean when we say that is Jesus is the Christ? Since the earliest days of Christianity, believers have sought to better understand who Jesus was and what he came to do. Over millennia, both theologians and scholars have called this search for understanding Jesus and his role Christology.[1]

The 2018 Sidney B. Sperry Symposium takes up these questions from a Latter-day Saint perspective, bringing together both biblical scholarship and Restoration insights and application. Technically Christology is “the study of Christ” and has historically encompassed Jesus’s relationship to God the Father, how divine and how human he was, and the way his ministry, saving death, and glorious resurrection reveal his role in our salvation. These are not insignificant matters. At the beginning of his famous Intercessory Prayer, Jesus proclaimed, “And this is life eternal, that they might know thee the only true God, and Jesus Christ, whom thou hast sent” (John 17:3; emphasis added). In light of this, attaining eternal life—the kind of immortal, glorified life that the Father and the Son share—is dependent not only upon our learning about them but also upon our coming to actually know them. Shortly before this, Jesus had taught, “I am the way, the truth, and the life: no man cometh unto the Father, but by me. If ye had known me, ye should have known my Father also: and from henceforth ye know him, and have seen him” (John 14:6–7). Accordingly, before we can come to know the Father, we must first know the Son.

Since 1973, this symposium series has honored the legacy of Sidney Branton Sperry (1895–1977), a lifelong religious educator who became one of the first Latter-day Saints to receive formal training in biblical studies. He earned an MA from the University of Chicago Divinity School in 1926 and then a PhD in oriental languages and literature, also from Chicago, in 1931. Each year the speakers at the symposium and contributors to the associated published volume not only strive to emulate the examples of Sperry and other well-trained but faithful LDS scholars, they also endeavor to raise our scholarly and spiritual standards in response to a mandate given by Spencer W. Kimball (1895–1985), twelfth president of The Church of Jesus Christ of Latter-day Saints. On October 1, 1976, President Kimball spoke as part of Brigham Young University’s centennial celebration. In that address, he charged that moving forward we must be “bilingual,” saying, “As LDS scholars you must speak with authority and excellence to your professional colleagues in the language of scholarship, and you must also be literate in the language of spiritual things.”[2]

Accordingly, as this year’s symposium participants have attempted to better unfold what the New Testament authors and books taught about Jesus, we have felt an obligation to explore these vital texts with sound scholarship, rigorous methodology— and continued faith. As we have sought to bring new insights from biblical scholarship to a wider Latter-day Saint audience, we have kept in mind our continuing obligation to foster conviction and deepen testimony. We also feel that becoming more “bilingual” is an obligation of our listeners and readers. To that end, we have been willing to stretch our audience, introducing new terms and ways of speaking about Jesus Christ and his work. To aid with what is sometimes a new language for our readers, we have provided an appendix of christological titles and a glossary of terms that we hope will be helpful to those who read and study this volume’s contents. Because there are different ways of approaching the same task—and because the topic divides fairly well into discussions of doctrine, scriptural analysis, and history—we have divided this volume into three sections, each with slightly different aims and different kinds of writing but all contributing to the same end: to come to know more about our Lord Jesus Christ even as we seek to know him better.

Beyond those whose contributions appear in this volume as written works, we are grateful to those who presented in this year’s symposium. We express special thanks to those whose efforts helped produce this year’s symposium and this collection. These include Beverly Yellowhorse and support staff of the College of Religious Education and the blind reviewers who carefully vetted each submission and made helpful suggestions for all of the papers. Thomas Wayment, Devan Jensen, Shirley Ricks, Brent Nordgren, Emily Strong, and the staff of BYU’s Religious Studies Center deserve particular mention for continuing to bring new levels of professionalism and scholarship to this series. In addition, we are grateful for the efforts of Nicholas Frederick, who reviewed and assisted with much of this volume.

We are pleased to have as our keynote speaker this year Sister Neill F. Marriott, second counselor in the Young Women General Presidency from 2013 to 2018. A gifted and inspiring speaker, Sister Marriott is known for her personal and powerful way of testifying of Jesus. To open our symposium, she is speaking on the topic of “Becoming Better Disciples of Jesus Christ,” and she and her publisher, Deseret Book, have graciously agreed to allow us to reprint a chapter by the same name from her recent book, Seek This Jesus. We wanted to begin with Sister Marriott because her witness is that of one who knows Jesus Christ, not just someone who knows something about him. While her original published story was geared toward the women of the Church, its message reaches all of us as she teaches through her own experiences, starting as a young woman seeking to come to Christ at a Protestant revival. In her words, “I have sought the Savior Jesus Christ for much of my life, and I believe, in my own weak and limited way, I have found him. He is my hope, my refuge, my teacher, my Redeemer. There is no other place to go for lasting help, direction, joy, and peace.”

Sister Marriott’s words comprise a homily, or a religious discourse intended for edification rather than simply intellectual instruction. We have a strong and valued homiletic tradition in the Church, where preachers of sermons, speakers at conferences, and writers find ways to relate the gospel and its teachings to real life—not only to teach but also to apply doctrine and, most of all, to inspire faith. As editors, we felt that stressing the value of coming to Christ and reviewing essential doctrines about him were important before embarking on a detailed study of New Testament teachings about him. To that end, this section of our volume includes essays from Robert Millet and Andrew Skinner, two senior, respected LDS scholars and both former deans of Religious Education. It concludes with the address of our other plenary speaker this year, Camille Fronk Olson, a former chair of ancient scripture, who uses the testimonies of Peter, Martha, and Mary as valuable patterns for how we can come to “believe and be sure” that Jesus is the Christ, the Son of the Living God.

Jesus in the New Testament

Camille Olson’s address provides a bridge into the main, exegetical section of the volume. Exegesis is the careful and formal analysis of a scriptural text that seeks to understand its original meaning before seeking appropriate, contemporary application. Employing the historical-critical method and other scholarly tools in this endeavor, LDS exegesis attempts to do this while keeping in mind the teachings and contributions of Restoration scripture and teaching, recognizing that different readings of the same text can often be valuable. In this case, such effort can help us better understand and appreciate what the New Testament teaches about Jesus Christ. While gospel study often harmonizes our picture of Jesus, the reality is that the four Gospels and other New Testament writings actually present different portraits of Christ. Just as the Gospels have been described as different facets of a diamond or varied stones in a mosaic,[3] the essays in this section combine to reveal what we hope readers will find to be a rich stained glass window, each pane providing different, and perhaps even new, answers to the questions of who Jesus was and what he did for us.

Scholars and students of the New Testament over the years have sought to answer these questions by focusing on texts that emphasize Jesus’s divinity or humanity, his premortal existence or his postresurrection glory, the nature of his relationship to God his Father, and his ministry or his sacrifice. Scholars in the twentieth century tended to view early Christian Christology as something that evolved or developed over time. For instance, some of the earliest texts seemed to suggest that Jesus in some way more fully became God’s Son with his resurrection, while Mark’s might imply that Jesus was appointed to do God’s work at his baptism. While Matthew and Luke clearly present a Jesus who was divinely conceived and miraculously born, John proclaims that as the divine Word, Jesus was in the presence of God in the beginning. Nevertheless, more recent analyses of the texts show that these ideas are present in both early and late passages. Latter-day Saints certainly have no problem with the proposition that New Testament authors fully understood who Jesus was and what he accomplished but might have emphasized or taught different aspects at different times. As a result, this section of the volume will present treatments of the Gospels, the writings of Paul, and the books of Hebrews and Revelation that will hopefully bring to light new insights about these texts and their presentations of Jesus Christ. By looking at the Savior in new ways, we may deepen our understanding of him and strengthen our faith in his saving work.

Christology after the New Testament

The final section of this volume is primarily historical. While these essays reveal how Christians in the period after the apostles sometimes struggled to understand the nature and work of Jesus Christ, they also seek to increase our appreciation of their sincerity and their desire to worship God and his Son. Such an appreciation can make us less critical of their efforts even as it leads us to be more understanding of people of different beliefs in our own day. From a Latter-day Saint perspective, of course, these essays make us grateful for the understanding and clarity that the restored gospel gives us, but we may also find ourselves wanting to be more thoughtful as we seek to reaffirm what we know about Christ and how we know it.

Our final contribution this year is about Christology in Joseph Smith’s New Translation of the Bible, commonly known as the Joseph Smith Translation. By ending with the work of the Church’s founding prophet, we hope to conclude with a reflection on how Restoration readings of the texts are important in helping us know and worship a revealed Jesus, one who is known not only from early scripture but also through revelation to prophets and apostles, one who is an inspiration to saints and sinners. Indeed, coming not only to know Jesus but also to become more like him through his atonement is the desired end: “Beloved, now are we the sons [and daughters] of God, and it doth not yet appear what we shall be: but we know that, when he shall appear, we shall be like him; for we shall see him as he is” (1 John 3:2).