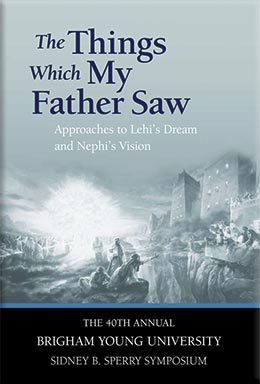 The Things Which My Father Saw

In January 2007, President Boyd K. Packer addressed the student body of Brigham Young University using Lehi’s dream as his theme. In his presentation, he challenged the listener to find meaning in the dream: “You may think that Lehi’s dream or vision has no special meaning for you, but it does. You are in it; all of us are in it. Nephi said that all scripture is likened “unto us, that it might be for our profit and learning” (1 Nephi 19:23). Lehi’s dream or vision of the iron rod has in it everything a Latter-day Saint needs to understand the test of life.” [1]

This invitation reveals the importance of both the dream and Nephi’s subsequent vision. The importance is further emphasized by the amount of space, almost one-half of the entire book of 1 Nephi (almost 20 percent of the total among of Nephi’s writings), that Nephi devotes to the two experiences.

Coming as it did at the beginning of the wilderness journey, a journey fraught with unknown perils, with no apparent understanding as to how long the journey would be, and without even a promise that they would return to the lands of their inheritance in Jerusalem, the dream reflects Lehi’s fears, as both a father and a leader, that his people would become lost, physically and spiritually. Though highly symbolic, it gave him and his people assurances from the Lord. Yet the symbolism in the dream is such that those who read of it today can sympathize with Lehi’s plight. Lehi’s dream speaks to all of us who find ourselves, at times, battling the dark and dreary trials of mortality. Thus the dream exemplifies our own struggle to return to our Heavenly Father and also guides us through this stage of the plan of salvation. As Elder L. Tom Perry pointed out in the October 1995 general conference, “This dream or vision of the tree of life, symbolically presented, provides us with much knowledge about life and the course we should follow.” [2]

One individual who was clearly struck by the power of the dream was Lehi’s son Nephi, who, upon hearing his father recount the particulars of the dream, desired to have a similar revelatory experience. Like another young man being raised to become prophet, Nephi desired to “see, and hear, and know these things by the power of the Holy Ghost,” knowing that to the one who diligently sought for such, “the mysteries of God [would] be unfolded unto them” (1 Nephi 10:17, 19). Though Nephi did in fact see the symbolic elements that his father did, the manner in which he experienced them was strikingly different.

Nephi became a witness and recorder to one of the most detailed visionary discourses on Christ’s ministry, both in the Old World and the New; the ensuing apostasy following Christ’s death and resurrection; and the eventual Restoration of the gospel, culminating in the fulfilling of the Father’s covenant with his children on this earth. Yet, as vast as this historical revelatory panorama was, Nephi understood the individualized nature of his vision as witnessed by his conversation with his brothers as he applied his vision to their experience (see 1 Nephi 15) and provided a scriptural example of President Packer’s invitation to find ourselves in the dream.

Since the coming forth of the Book of Mormon, the dream and the vision has resonated in the Latter-day Saint spiritual imagination, reflected in song and artwork, fulfilling President Packer’s observation. In this vein, this volume presents twenty studies on Lehi’s dream and Nephi’s vision that provide insights into the ancient setting, the meaning of the symbols, and their gospel application. The papers were delivered at the 40th Annual Sidney B. Sperry Symposium, held at Brigham Young University. The keynote address of Russell T. Osguthorpe, Sunday School general president for The Church of Jesus Christ of Latter-day Saints, opens our volume with insights into teaching and learning and sets the tone for what we hope is an invitation inherent in each paper—that the reader may come to realize that they too “are in it.”

We express our appreciation to the contributors of the volume and the work that they have done as represented in the volume. We also thank our reviewers who, through their comments and insights, blessed both the authors and us as the committee. Finally, we also thank Robert L. Millet, R. Devan Jensen, Brent R. Nordgren, Joany O. Pinegar, Jessica Arnold, Heidi Bishop, Jake Frandsen, Matt Larsen, Jonathon Owen, Rosie Ricks, Nyssa Silvester, and Jeff Wade at the Religious Studies Center at Brigham Young University and our colleagues at Deseret Book for the time and effort that they gave to bring forth this volume. To all those mentioned, we recognize how integral each individual was to the quality of this volume—thank you.