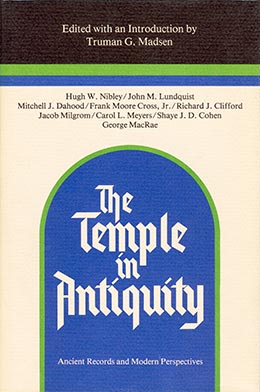 The Temple in Antiquity

The symposium which was the stimulus of these essays was held at Brigham Young University in March of 1981. The title “The Temple in Antiquity” gave us sufficient range to invite papers on both pre- and post-Christian approaches to temples and temple ritual. Participants were selected for their competence in specialized areas. Some bridges were drawn—more of them in the aftermath question-and-answer sessions than in the formal papers-to temple-building doctrines and practices of the Latter-day Saints.

Three papers have been added to the symposium presentations. (1) Hugh Nibley’s essay “What Is a Temple?” He has added to it an updated semiautobiographical essay of reflections on world ritual and temple. The second paper is more than a supplement to his own work; it provides an overview in a multicultural perspective of the other specialized papers of the series. Hence these two essays are placed first in this volume. (2) An outstanding paper by Carol Meyers focusing on the pillars of the ancient Temple of Solomon. And (3) a typological study of temples in the Near East by John M. Lundquist. A précis of his doctoral thesis, it combines recent scholarship on temples with relevant archaeological findings in the Middle East.

Most of the contributors are “test-minded.” Their skills are linguistic, historical, and at some points archaeological. Another discipline might have been represented. Comparative anthropologist Professor Merlin H. Meyers was asked to expand themes which his students encounter in his lectures: (1) that elements or features of temple rituals and ordinances, as we know them, are found with remarkable similarity among people of diverse cultures throughout the world; (2) that these rituals create and recreate the categories (concepts, ideas, images) through which men perceive reality and thus provide force and direction for the transformation of lives; (3) that temple rituals are storehouses of information, and in them is manifest knowledge of the most profound concerns of a people, which is divulged only in the appropriate setting to those of “clean hands and pure hearts.” Other commitments prevented his preparation of a formal manuscript on these themes.

Like the contributors to Reflections on Mormonism, an earlier volume in this series, these participants had no agenda except to express themselves on assigned topics. Their views are their own. Some possible parallels to Mormonism are sketched in my introductory paragraphs, but the wider and deeper implications of their conclusions are left to the comparison-minded reader.

Except where otherwise noted, biblical passages in these papers are translations from the Hebrew Bible. The numbering of the verses is sometimes slightly different from that of the King James Version.