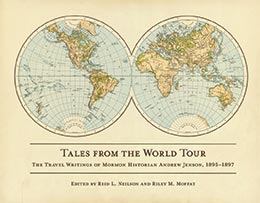 Tales from the World Tour

Happy is the man who finds himself doing that in which his heart delights and which harmonizes with his natural ability and desires; but unhappy is he who through force of circumstances, over which he has no control, is compelled through his sojourn in mortality, to do something that is in opposition to his nature and ability. A man who enjoys his work finds life sweet and pleasant and every moment of it gives him joy and satisfaction, while the man who is forced to do things which he dislikes finds life a drudgery indeed. . . .

I have become convinced that historians, like poets, are born as such, and that this enables them to make their life’s labor successful.

With this belief I can think of the beginning when God stood in the midst of the intelligences or His spiritual children and found among them many who were noble and good. So, in connection with the creating of an earth on which to place His offspring, God chose these noble spirits as leaders and rulers. Abraham, who in mortality became the Father of the Faithful, was chosen as one of them; Jeremiah also was chosen to be a prophet before he was born, and many others, undoubtedly, were chosen for different positions on the earth. I am impressed with the thought that certain spirits were selected to come down and mingle with these leaders and rulers in mortality as poets and historians to record the work to be done by these great and noble ones.

As detailed in the introduction to this volume, Andrew Jenson’s letters to the Deseret News represent a significant contribution to the history of The Church of Jesus Christ of Latter-day Saints in a late-nineteenth-century global context. Until now, Jenson’s dozens of published letters have remained scattered throughout the pages of three years’ worth of the Deseret News, from 1895 to 1898, making them difficult to access for scholars and for Church members. Jenson says he sent eighty letters to the Utah newspaper. After extensive searching, we have only been able to locate seventy-nine of these letters, in both the Deseret Weekly News and the Deseret Evening News. At times Jenson’s letters were numbered chronologically in roman numerals, and at other times the letters were unnumbered. The list of letter citations appears in this volume as appendix 3. The Danish-American historian did, however, publish his travelogue as Jorden Rundt: En Rejsebeskrivelse Af Andrew Jenson (Around the World: A Travelogue of Andrew Jenson) in 1908. It is in Danish, however, rendering it inaccessible to English speakers. To remedy this historical omission, we gathered and transcribed the letters, and appended portions of Jenson’s Autobiography [1] to round out the travelogue. We have divided Jenson’s letters and the portions from his autobiography into twelve chapters, which are based on the geographical segments of his journey.

Although we initially set out to annotate Jenson’s writings, we became convinced (after two years of research at the Harold B. Lee Library and the Church History Library) of the futility of trying to identify the 1,183 individuals and 2,027 places that Jenson references in his travelogue. After surveying comparable travel narratives that likewise do not include extensive annotation, we feel good about our approach to simply introduce Jenson and his journey and then let him speak for himself through his writings. [2]

Manuscript copies of these letters are not extant. Thus we present the letters as they appeared in print in the Deseret Weekly News and the Deseret Evening News. In publishing these letters, therefore, we considered the printing process during his tour. Jenson wrote the letters, which he then sent via the late-nineteenth-century postal system across the globe to the News for typesetting and printing. As a result, at least a couple of editorial layers exist between what Jenson wrote and what exists in print in the News. So it is possible that orthographic and grammatical errors are not those of Andrew Jenson but those of the editor, typesetter, or printer.

To improve the clarity of Jenson’s record, we have chosen to correct much of his grammar, orthography, punctuation, and usage as long as these changes did not alter Jenson’s meaning. In many cases we have done this silently to decrease the visual editorial apparatus of documentary editing, which at certain points can be obtrusive to the readability of Jenson’s record. We have silently added missing articles and missing prepositions, and we have corrected verb tense or number as appropriate. We have occasionally bracketed clarifications to the text.

We have made these corrections according to the fifteenth edition of The Chicago Manual of Style, the third edition of the Style Guide for Publications of The Church of Jesus Christ of Latter-day Saints, and the eleventh edition of Merriam Webster’s Collegiate Dictionary.

The following is a list of common editorial corrections made throughout the volume:

Date header: Each letter begins with a day, month, and year. We have standardized these headers and have bolded them for ease of reference, “Monday, June 10,” for example. We have also bolded the day of the week and the date whenever Jenson indicates a new entry. We have silently corrected dates so that the entries appear in proper chronological order.

Dates: Dates have been standardized according to Chicago. “The 11th of June” becomes “June 11,” for instance.

Foreign words and phrases: We have italicized unfamiliar foreign words when they are used as words. When foreign words or phrases appear in dialogue or in longer quoted passages, we have kept them in roman type. For example, “I could say, ‘Na ke akua e ho‘opomaika‘i okou apau.’”

Indecipherable characters: Occasionally a printing error or the age of the printed page renders a letter indecipherable. In some instances the word can be deduced from the context in which it appears. If the letter is indecipherable but is clear from the context, we have filled the letter in without brackets. Rather than rendering “Vancouver I[s?]land” we give you “Vancouver Island.” In other cases, however, more than one letter is plausible. Where this is the case, we have provided our best guess and have placed letter in brackets with a question mark following to indicate our interpretation.

Incorrect or outdated spelling of place names: Sometimes the typesetter has printed a u where there should be an n, and these are likely not Jenson’s errors. Occasionally there are multiple misspellings of the same place name. We have decided to modernize and standardize the spelling of place names according to official current government spellings. In the United States these spellings are from the Board on Geographic Names, which end up being used on the U.S. Geologic Survey maps.

European names: We have tried to stay true to the spelling of place names in their various languages and have included diacritics and special characters/letters. Mâcon, Frankfurt am Main, and Luzerne are a few examples. However, we have chosen to render the German “straße” as “strasse,” as it appears in Jenson’s Autobiography.

Middle Eastern names: In the Middle East, names are Romanized from non-Roman alphabets and variations exist over centuries or millennia. We tried to find current spellings from the U.S. Board on Geographic Names as used on current maps from the CIA and other agencies, and for Israel, we used the Survey of Israel, so that readers would have the best chance of following Andrew Jenson’s travels on modern maps.

New Zealand names: For New Zealand, we use the spellings that appear on the official Land Information New Zealand topographic maps.

Polynesian names: We have added the ‘okina in Polynesian names. The ‘okina is in current usage in Tonga and Samoa but not on U.S. government maps. There is tremendous pressure locally for the ‘okina to be used, and it enhances readability.

Names of people: We have chosen to clarify the names of people. We have spelled out names that are abbreviated in the text. “Wm.” becomes “William,” and so forth. We have also corrected misspelled names.

Names of ships: Ship names appear in quotation marks in Jenson’s text. We have chosen to italicize them according to Chicago.

Numbers: Ordinal and cardinal numbers appear throughout in either verbal or numerical form. Because many of the cardinal numbers exist in quick succession and are for statistical purposes (for example, how many deacons there are in a particular branch), we have chosen to leave the numbers as they appear in the text and not follow Chicago’s style in this instance. In the case of the date headers to the letters, we have corrected ordinal numbers according to Chicago. We have left scriptural references containing ordinals as they are: “Then the 15th chapter of Luke was read from an entire new translation of the Bible.” Otherwise, we have let ordinals stand.

The leadership of Brigham Young University’s College of Religious Education and Department of Church History and Doctrine, including Terry B. Ball, Arnold K. Garr, Steven C. Harper, Kent P. Jackson, Dennis L. Largey, John P. Livingstone, Paul H. Peterson, Brent L. Top, and Dennis A. Wright, as well as the staff of its Faculty Support Center, helped make this project a reality. Robert L. Millet, Richard Neitzel Holzapfel, R. Devan Jensen, Brent Nordgren, and the editorial and production staff of the Religious Studies Center were a delight to work with from concept to printed page. In fact, the RSC provided a substantial grant for us to hire student research assistants, including Ashley Gentile, Krystyna Hales, Landon Lisonbee, Paul Olson, Adam Prestidge, and Christopher Rawlins, to complete this project. Luke M. Moffat is to be thanked for his skillful cartographic work on the custom maps featured herein. We are also grateful for the support of the executive leadership of the LDS Church History Department, including Elder Marlin K. Jensen, Elder Steven E. Snow, Elder Marcus B. Nash, and Richard E. Turley Jr. Church History Department employees Elizabeth Pinborough and Mitchell K. Schaefer completed the document transcription verification, source checking, and editorial guidelines for the volume. They both have bright futures as Mormon historians.

Lastly, we wish to thank our families for encouraging us to produce this fascinating travelogue that tells the story of The Church of Jesus Christ of Latter-day Saints in the late nineteenth century through the pen of the indefatigable historian and chronicler Andrew Jenson.