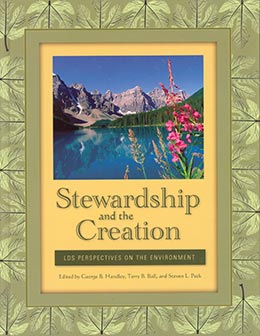 Stewardship and the Creation

LDS Perspectives on the Environment

Members of The Church of Jesus Christ of Latter-day Saints have much to contribute in meeting the increasing challenges of environmental degradation in the world today. Have we, however, sufficiently tapped into the rich potential of our beliefs and practices in this regard? To foster more conversation and improved practices on matters of our earthly stewardship, and with the generous support of Brigham Young University’s administration, we—George B. Handley from the College of Humanities, Steven L. Peck from the College of Biology and Agriculture, and Terry B. Ball from Religious Education—joined together across our respective disciplines to organize a symposium that took place at Brigham Young University on February 27–28, 2004. Entitled “Our Stewardship: Perspectives on Caring for Creation,” the symposium introduced views inspired by Church doctrine into the ongoing conversation about the welfare of the physical environment in our respective communities. Although clearly not an effort to express formal Church policy, this selection of proceedings from the symposium will hopefully stimulate members to consider carefully the nature of their own stewardship in caring for God’s creations. We also hope to create a dialogue with those of other persuasions and find common ground with fellow concerned citizens.

In the political fray over natural resources, we hear criticisms from some about the pitfalls of environmentalism. From others we hear about the shortcomings of religion. Nevertheless, we have reason to believe that both can be helpful in teaching us to balance our responsibilities to human society, to the land, and to the future. However, stereotyping and polarization have consumed much of our energy and wrestled our potential for productive and sustainable change into an often unfruitful stranglehold. In today’s climate, it is as easy to assume an environmentalist cannot be religious as it is to assume that believers are indifferent to waste and degradation of the earth. Although the Church has made no official declaration regarding the environment, this is no reason to conclude that our religion holds beliefs antithetical to good stewardship. Indeed, these essays demonstrate that Church scriptures and teachings provide a consistent picture of human beings as stewards accountable before God for the use and care of His creations. They reaffirm and develop further what previous examinations of Latter-day Saint theology and history have repeatedly demonstrated: our religion offers a unique and important perspective on the notion of environmental stewardship and a foundation for a strong environmental ethic. Previous publications on the subject include those by Hugh Nibley, Thomas Alexander, and others, including the essays in New Genesis. The March 2004 issue of the Ensign most recently addressed the subject.[1]

It is clear, then, that the relevance of Latter-day Saint belief to environmental problems has not been lost on all of its believers. What often goes unnoticed is how many members are actively involved in environmental causes and how directly their belief has motivated their efforts. In addition to demonstrating that Latter-day Saint belief is compatible with good stewardship of the earth, the essays here debunk at least one more myth regarding environmentalism: its spelling notwithstanding, it is not an “ism” in the traditional sense. It is an inadequate word to describe a whole host of often competing movements, organizations, philosophies, and values, not all of which are compatible with Christianity in general or Mormonism in particular. But rather than using these occasional incompatibilities as an excuse to demonize the “movement” of environmentalism and disregard the legitimate concerns that it continues to raise, the symposium’s participants presented a Latter-day Saint perspective of stewardship that resonates well with the Christian environmental ethics articulated by environmentally concerned Christian writers of many stripes.

We hope it is not recklessly naive to look forward to a time when a commonly accepted sense of obligation to the well-being of the physical world and to future human generations overrides political and religious differences. It is perhaps one of the more shameful aspects of our current age that things as patently universal as the air we breathe, the water we drink, and the food we eat have become partisan footballs tossed about in an effort to gain our political loyalty. Environmental stewardship is not an issue that has to be a battle between liberals and conservatives; it entails the best impulses of liberal generosity and conservative restraint. The profound contributions of various Christian ecotheologians over the past decades have provided an example of how to tap into the rich doctrines of the Bible to articulate an ethic with regard to the environment and without regard to partisan infighting. These authors have taught that environmental stewardship is neither something we can afford to compartmentalize in our lives nor something we should allow to become politicized. In sum, we can ill afford to pretend that identifying error in others transcends our duty toward the highest principles of stewardship in our own tradition. This book is dedicated to this kind of attention within the Latter-day Saint tradition, and it is our hope that in so doing, we will not only discover what is unique but also what is commonly shared with other views of stewardship. If we care more about doing good than about being right, we will recognize, all of us, that we do not want to run the risk of allowing the integrity of ecosystems to fracture and degrade while we bicker over our differences.

Recent publications include Aaron Kelson’s The Holy Place: Why Caring for the Earth and Being Kind to Animals Matters (Spotsylvania, VA: White Pine Publishing, 1999); New Genesis: A Mormon Reader on Land and Community, eds. Terry Tempest Williams, William B. Smart, and Gibbs M. Smith (Layton, UT: Gibbs Smith, 1998); George Handley’s “The Environmental Ethics of Mormon Belief,” in BYU Studies 40, no. 2 (Summer 2001): 187–211; Matthew Gowans and Philip Cafaro’s “A Latter-day Saint Environmental Ethic,” in Environmental Ethics 25 (2003): 375–94; and finally from the Ensign, see “The Wonder of Creation” by Mark J. Nielsen, 60–65, in the March 2004 issue.