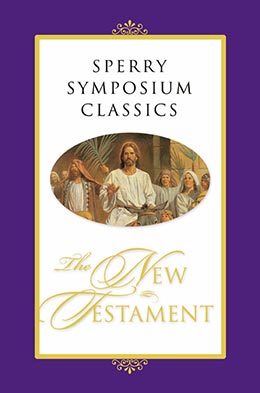 This volume contains a selection of essays on the New Testament that were presented by General Authorities and religious educators during the Sidney B. Sperry Symposium series. We have included essays that cover a wide range of topics from the four Gospels, Acts, the Epistles, and Revelation. Some essays deal with broad themes, such as “The Four Gospels as Testimonies,” by S. Kent Brown; “The Love of God,” by Matthew O. Richardson; or “Walking in Newness of Life: Doctrinal Themes of the Apostle Paul,” by Robert L. Millet. Other essays focus on more specific aspects of the New Testament, such as “Sanctification and Justification Are Just and True,” by Elder Gerald N. Lund, or “The Jerusalem Council,” by Robert J. Matthews. In addition, we have included two articles that are of particular significance for Latter-day Saints: “The Book of Mormon as an Interpretive Guide to the New Testament,” by Dennis L. Largey, and “New Testament Prophecies of Apostasy,” by Kent P. Jackson. Throughout it all, our intent has been the same as John’s and Paul’s: “These are written, that ye might believe that Jesus is the Christ, the Son of God; and that believing ye might have life through his name” (John 20:31), and, “For I determined not to know any thing among you, save Jesus Christ, and him crucified” (1 Corinthians 2:2).

The selecting and preparing of these essays has been a labor of love because we love the New Testament and its teachings. Speaking of the Bible, the Prophet Joseph taught, “He who reads it oftenest will like it best” (Teachings of the Prophet Joseph Smith, comp. Joseph Fielding Smith [Salt Lake City: Deseret Book, 1976], 56). Of course, no supplement can or should replace the original text, and this is particularly true for our study of the New Testament. It is our hope that readers will view this volume as a worthy supplement for their ongoing study of the New Testament.