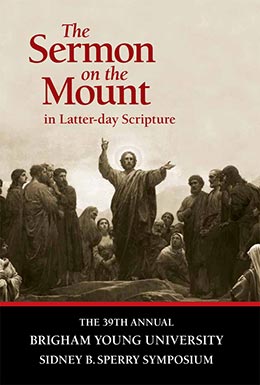 The Sermon on the Mount in Latter-day Scripture

The 2010 Sidney B. Sperry Symposium seeks to honor and discuss the magisterial teachings contained in the Sermon on the Mount. The title “Sermon on the Mount” seems to have been first coined by Saint Augustine of Hippo (AD 354–430) [1] and has endured throughout the centuries even though different versions of the sermon were given in different settings. In Luke the sermon was given “in the plain” (Luke 6:12, 17), and in the New World it was given at the temple (see 3 Nephi 11:1). Augustine, however, was clearly influenced by Matthew’s version of the sermon, which begins with “And seeing the multitudes, [Jesus] went up into a mountain” (Matthew 5:1). Throughout history the Christian world has gravitated to the Matthean version, but all three versions provide valuable insights.

In Matthew’s Gospel the sermon is Jesus’ inaugural message, introducing Jesus’ teachings and showing that Jesus is indeed the anticipated “Coming One” (Matthew 11:1–5). [2] The mountain setting is particularly important in this Gospel because it serves as one means of portraying Jesus as the “new Moses.” Just as Moses went up into a mountain to receive the law, Jesus went up into a mountain to give the new law. When we again find Jesus on a mountain—this time as a resurrected being instructing his disciples to go into all nations, “teaching them to observe all things whatsoever I commanded you” (Matthew 28:20)—he was perhaps referring to his teachings at the Sermon on the Mount. [3]

In Luke’s Gospel, the inaugural sermon takes place in the synagogue in Nazareth (see Luke 4:16–27). This sermon, called the Sermon on the Plain, plays a pivotal role in Luke. It immediately follows the calling of the Twelve (see Luke 6:12–16). While there are similarities between the Lucan and Matthean sermons, the Lucan sermon is significantly shorter. It includes none of the material from Matthew 6, which is instead scattered throughout the rest of Luke’s Gospel. Even so, the Lucan sermon does contain material that is not found in the Matthean version, most notably the series of woes attached to the Beatitudes. [4]

Latter-day Saints recognize that the Sermon at the Temple recorded in 3 Nephi parallels the Matthean sermon in many ways, but it is certainly not the same sermon. In the Book of Mormon account, Jesus speaks as a resurrected, glorified being and addresses a different audience. [5]

Although studying the different versions of the sermon within their separate contexts is helpful, Augustine was perhaps the first to recognize that the Sermon on the Mount, independent of its context, contains teachings that are worthy of serious study and contemplation. [6]

In this volume we have included selected papers submitted for the symposium held at Brigham Young University on October 29–30, 2010. The first chapter is the keynote address delivered by Daniel K Judd titled “‘Resist Not Evil’: The Supreme Test of Christian Discipleship.” We have arranged the remaining chapters into four blocks: introductory material, papers that discuss elements of the sermon in the order found in Matthew, papers that highlight teachings from the Lucan sermon, and papers that discuss the Joseph Smith Translation’s contributions. The final paper discusses how the sermon is later used in the Book of Mormon and the Bible.

The 2010 Sperry Symposium committee consisted of Patty Smith, Thomas R. Valletta, and Professors Gaye Strathearn, Thomas A. Wayment, and Daniel L. Belnap. The editorial responsibilities were carried out by Professors Strathearn, Wayment, and Belnap. We express our appreciation to each of those who contributed to the Sperry Symposium and to this volume of papers. We are most grateful to our colleagues at Brigham Young University who reviewed the chapters and offered helpful suggestions.