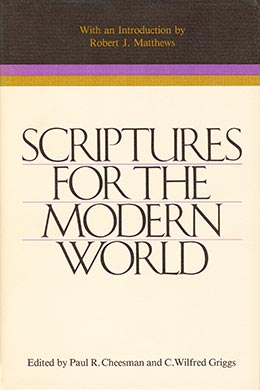 Scriptures for the Modern World

Notes on the Contributors

Elder Neal A. Maxwell, a member of the Quorum of the Twelve Apostles of The Church of Jesus Christ of Latter-day Saints when this was published, was a member of the Presidency of the First Quorum of the Seventy when he delivered this address. He served as Commissioner of Education for the Church Educational System from 1970 to 1976; from 1974 to 1976 he also served as an Assistant to the Quorum of the Twelve. Before 1970, Elder Maxwell held a variety of administrative and teaching positions at the University of Utah, including executive vice-president, and he earlier served as a legislative assistant to United States Senator Wallace F. Bennett of Utah. He is the author of many articles and books, including Look Back at Sodom, an imaginative reconstruction of the fall of Sodom, and Of One Heart, a similar treatment of the city of Enoch.

H. Donl Peterson was born in Lehi, Utah, and earned bachelor's and master's degrees at Brigham Young University. He taught in the LDS seminary program for five years and in the institute program for an additional five years. After receiving a doctorate education at Washington State University, he joined BYU's faculty in 1964, where he currently is professor of religious education and Pearl of Great Price director in the Religious Studies Center. author of A Study Guide for the Pearl of Great Price and Moroni—Ancient Prophet, Modern Messenger, he has contributed many articles and chapters to Church publications.

Jo Milgrom holds a Ph.D. from the Graduate Theological Union at Berkeley, California, where she is now visiting assistant professor in theology and the arts. she has taught as the San Francisco Art Institute and in the overseas program of the Hebrew University at Jerusalem, and has served as consultant at the Skirball Museum of the Hebrew Union College of Los Angeles and as Scholar-in-Residence at the Brandeis Bardin Institute of Los Angeles. Dr. Milgrom has been awarded fellowships from the Institute of Jewish life (1974, 1975) and NDEA Fellowships (1966, 1967).

Jacob Milgrom, a professor in the Department of Near Eastern Studies at the University of California at Berkeley when this was published, has held positions with the University of California Study Center, at the Hebrew University in Jerusalem (1969$ndash;71), and with Virginia Union University's graduate school of religion in Richmond, Virginia (1955–56). Professor Milgrom received the D.H.L. degree in 1953 from the Jewish Theological Seminary in New York City. a foremost authority on the book of Leviticus, he has received many awards, including the rabbi Solomon Goldman Award for Literary Creativity (1973) and a Guggenheim Fellowship (1978), and was elected a fellow of the American Academy for Jewish Research (1978). His publications include Studies in Levitical Terminology (Berkeley: University of California Press, 1970), Cult and Conscience: The Asham and the Priestly Doctrine of Repentance (Leiden: E. J. Brill, 1976), and over one hundred articles in scientific journals and encyclopedias.

S. Kent Brown, director of the ancient studies area of Brigham Young University's Religious Studies Center when this was published, has taught early Christianity, New Testament, Hebrew, Old Testament, and the Intertestamental period. Professor Brown has a Ph.D. from Brown University in biblical studies (1972). Special honors include James Foundation Fellow at Brown University, Fellow of the National endowment for the Humanities and the Council on Library Resources at Brown University, and Fellow of American Research Center in Egypt.

Victor L. Ludlow was an Old Testament specialist at Brigham Young University when this was published. He received a Danforth Fellowship for graduate studies at Brandeis and Harvard and received his Ph.D. from Brandeis University, where he majored in Near Eastern and Judaic studies. Dr. Ludlow directed the BYU Study Abroad program in Jerusalem in 1976. He has also conducted several tours to Israel. He chaired the BYU Faculty General Education Council, served on the board of trustees for the Society for Early Historic Archaeology, and was a member of the BYU Study Abroad Advisory Committee at the time of publication.

Aziz S. Atiya, distinguished professor of language and history at the University of Utah in Salt Lake City, is founder of that university's Middle East center and Middle east Library. He obtained his Ph.D. in London in 1933, his D.Litt. in Liverpool in 1938, and has since received three honorary doctorates at American universities. Born in a small Egyptian village, Dr. Atiya has studied and taught at major universities all over the world, and has published more than a hundred books, monographs, and articles. At the time of publication, his latest major project was a Coptic Encyclopaedia in several volumes, under the sponsorship of the National Endowment for the Humanities.

Arthur Wallace was a professor at the University of California at Los Angeles when this was published. He received a Ph.D. from Rutgers University in soil and plant sciences and is a graduate of Utah State University, where he majored in chemistry. He is the author of numerous articles and books, including Can Mormonism Be Proved Experimentally? and Successful Family Organizations.

Noel B. Reynolds, associate academic vice-president at Brigham Young University when this was published, obtained his Ph.D. from Harvard University in political theory and philosophy. He was awarded a Liberal Arts fellowship from Harvard Law School (1976–77) and a Harvard Graduate Prize fellowship (1968–70). A former chairman of the BYU Department of Philosophy, he has been a visiting faculty member with BYU's J. Reuben Clark Law School.

John L. Sorenson was chairman of the Department of Anthropology and Archaeology at Brigham Young University when this was published. He was an archaeologist in Tabascio and Chiapas, Mexico, with the New World Archaeological Foundation in 1953. He has been director of behavioral sciences with the General Research Corporation in Santa barbara (1964–69) and president of Bonneville Research Corporation in Provo, Utah (1969–71). His Ph.d. in anthropology comes from the University of California at Los Angeles, and he has over ninety publications to his credit.

Paul R. Cheesman was a professor of religious instruction at Brigham Young University when this was published. He had been director of the Book of Mormon Institute and at the time of this symposium was director of the scripture area of the Religious Studies Center. He taught in California public schools and was also a seminary teacher before joining BYU's faculty, where he earned a doctorate in religious education in 1967. He has been involved in the production of films, filmstrips, and illustrated books dealing with the scriptures and Church history.