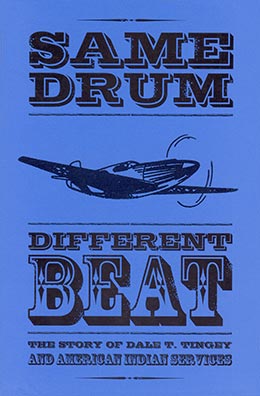 The Story of Dale T. Tingey and American Indian Services

I had not seen the airplane or heard its idling engine as it swooped out of the sky. But when it was about one hundred feet above me to the left, the pilot gave it full throttle to pull out of his diving approach and give the full effect of the roar of the accelerating engine. I had shinnied up a pole and was changing a yard light in a white shirt and tie, nervously reaching out to secure the new bulb when the plane descended upon me. Not just a little rattled, I dangled high above the ground, straining to make out the pilot as he turned back to take a second pass at “putting me in his sights.” But this time, it was a slower fly-by, allowing me to see clearly the laughter on the faces of the mission secretary, Elder Lynn Marrott, and the pilot, my mission president, Dale Thomas Tingey. It was not the first time I had been buzzed by the president, nor would it be the last.

The Navajo Indian Reservation would be made much smaller by his use of that airplane. He would rouse sleepy missionaries early in the morning, drop notes to them on paper inserted in pop cans or wrapped around small stones with elastic bands, and even land on primitive reservation roads to visit, motivate, or chastise any who might need it. And if chastisement was needed, the sound of that airplane was impending Armageddon to the reprobate missionary. Both the president and his plane were swift and sure. I testify.

The call of Dale T. Tingey as mission president of the Southwest Indian Mission for The Church of Jesus Christ of Latter-day Saints triggered a lifetime of service to Native Americans by a man who knows how to match up needs with resources while making everyone feel good in the process. Insistent with wealthy donors yet not patronizing with humble recipients, Dale has been able to bring scholarships, tractors, garden seeds, Christmas gifts, and farm implements, along with a variety of other helpful goods and services, to reservations throughout North America. His twinkling eye and ready smile are recognized by giver and receiver. He gets things done simply and simply gets things done.