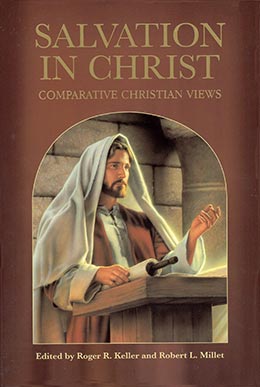 For three days, April 11–13, 2002, Brigham Young University hosted a unique conference titled “Salvation in Christ: Christian Perspectives.” Scholars, theologians, and interested laypersons came together to celebrate the redemptive act of our Lord Jesus Christ and to explain their understandings of salvation in Christ from the viewpoints of their respective Christian denominational backgrounds. A broad spectrum of Christian approaches was represented, as was the range of issues needing to be addressed with the monumental topic of “Salvation in Christ” as the theme for the gathering.

The purpose of the conference was for participants to speak, listen, and learn from one another—to become better acquainted with various faith traditions, particularly different perspectives on the major doctrines associated with Christian salvation (such as rebirth, justification, sanctification, spiritual gifts, sacraments, ordinances, resurrection, and the fate of the unevangelized). We expected to hear much about the power and majesty of our Lord, and we were not disappointed. The speakers articulated positive statements of various denominational and personal beliefs and explained differences in understandings of salvation.

We anticipated much exchange and a good deal of comparing of views (both in and out of the formal sessions), and we hoped individuals who had been invited to the conference would provide honest insight into their religious tradition and would represent devoutly, and with passion, their own faith perspectives. We also hoped that no one would feel threatened or that any of the participants would feel the need to militantly press their viewpoints or try to discredit another’s. We trust our hopes were fulfilled. One of our dreams for this conference was that bridges of understanding would be built, genuine enlightenment promoted, and greater brotherhood and sisterhood created among all who participated. We continue to hope that all the efforts to host the conference helped to alleviate misunderstanding and especially mistrust.

Some may ask, Why would Brigham Young University, an institution avowedly, intimately, and unashamedly associated with The Church of Jesus Christ of Latter-day Saints, want to sponsor a conference such as “Salvation in Christ”?

Perhaps we can begin to answer this question first by saying that it is because Latter-day Saints see themselves as people who love and worship the Lord Jesus Christ. The Church’s prophet-founder Joseph Smith, said: “The fundamental principles of our religion are the testimony of the Apostles and Prophets, concerning Jesus Christ, that He died, was buried, and rose again the third day, and ascended into heaven; and all other things which pertain to our religion are only appendages to it.”[1]

Second, from the very beginning members of The Church of Jesus Christ of Latter-day Saints have possessed an abiding belief in the fatherhood of God and brotherhood and sisterhood of all humankind. Again, Joseph Smith said: “While one portion of the human race is judging and condemning the other without mercy, the Great Parent of the universe looks upon the whole of the human family with a fatherly care and paternal regard; He views them as His offspring, and without any of those contracted feelings that influence the children of men.”[2]

Third, Latter-day Saints desire to make the principle of the fatherhood of God and the connectedness of the human family a living reality in the world. In the words of the fourteenth President of the Church, President Howard W. Hunter, as Latter-day Saints we “seek to enlarge the circle of love and understanding among all the people of the earth.”[3]

More recently, the fifteenth President of the Church, Gordon B. Hinckley, said about Latter-day Saints everywhere: “We want to be good neighbors; we want to be good friends. We feel we can differ theologically with people without being disagreeable in any sense. We hope they feel the same way toward us. We have many friends and many associations with people who are not of our faith, with whom we deal constantly, and we have a wonderful relationship. It disturbs me when I hear about any antagonisms. . . . I don=t think they are necessary. I hope that we can overcome them.” President Hinckley then advised Latter-day Saints to adopt the true Christian demeanor: “Be friendly. Be understanding. Be tolerant. Be considerate. Be respectful of the opinions and feelings of other people. Recognize their virtues; don=t look for their faults. Look for their strengths and their virtues, and you will find strength and virtues that will be helpful in your own life.”[4]

This not only seems like good advice for religious practitioners everywhere but also helps explain why we were excited to host the conference. It was our desire that each person who participated in the conference would feel warmed, welcomed, and enlightened by the influence of the Holy Spirit. We hope we were successful.

The conference was organized by Brigham Young University’s two Richard L. Evans Professors of Religious Understanding: Roger R. Keller and Robert L. Millet. Their vision and efforts are deeply appreciated. In addition, we extend thanks to Professor David Paulsen, a former Evans professor, without whose efforts the conference could not have had such success.

In 1972 the Richard L. Evans Chair of Christian Understanding was established to honor the ministry and outreach of Elder Richard L. Evans, a member of one of the Church’s governing bodies, the Quorum of the Twelve Apostles. Elder Evans was especially noted for his broad influence among many people, both as the voice of the Tabernacle Choir on the Sunday morning CBS radio broadcast Music and the Spoken Word, as well as in his role as president of Rotary International.

Truman G. Madsen, professor of philosophy at Brigham Young University, was appointed as the first Evans Chair. For twenty years, Professor Madsen worked tirelessly to bring scholars and church leaders from varying religious persuasions to Brigham Young University to participate in conferences, symposia, and special lectures. The ideas presented in these events reached audiences far beyond the BYU community because the proceedings of much of what was done on campus through the Richard L. Evans Chair of Christian Understanding were published through the BYU Religious Studies Center.

Following Professor Madsen’s retirement in 1991, the title of the Evans Chair was expanded to the Richard L. Evans Chair of Religious Understanding. In addition, Religious Education effected a new organization. Instead of one chair occupied by one professor, multiple chairs and professorships were created. Persons appointed to occupy the Evans professorship do so for a period of one to three years and work in the area of their expertise—religion, history, philosophy, social sciences, and so on. Furthermore, the Evans professorships provide funds for research assistance, travel, and visiting scholars. An underlying premise of the Richard L. Evans Professorships for Religious Understanding is that The Church of Jesus Christ of Latter-day Saints can do much to foster religious understanding, which the rest of the world needs and may even be hungering for.

In pursuit of this goal we were honored to be able to welcome to the BYU campus many distinguished scholars and church representatives from different backgrounds, coming together in peace for such a promising purpose. We thank especially the tireless workers in the division of conferences and workshops here at BYU, especially Susan Overstreet.

With the exception of the essay by the Reverend Professor Douglas J. Davies of the University of Durham, England, the papers that follow are those that the authors presented, albeit often in condensed form, at the conference. We believe this to be a significant collection.