Remarks at the Dedication of the Church History Library

Elder Marlin K. Jensen was Church Historian and Recorder of The Church of Jesus Christ of Latter-day Saints when this was published. 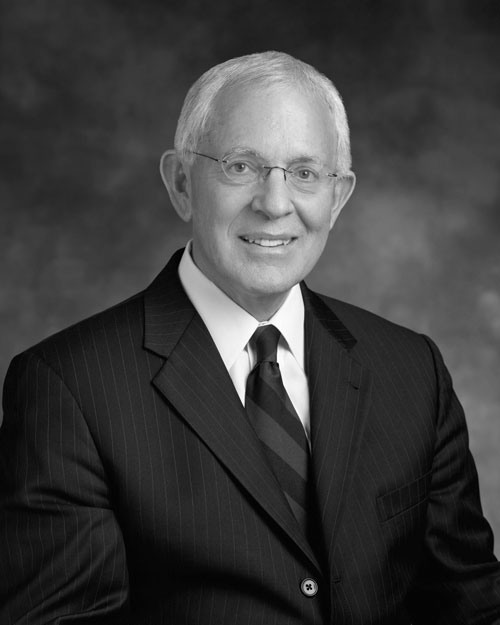 Days of dedication are almost always days of celebration and occasions for expressions of gratitude. This is definitely a great day in the history of Church history!

This magnificent new Church History Library has taken fifteen years to plan and nearly four years to build. It will protect the Church’s priceless historical collections—books, pamphlets, periodicals, journals, manuscripts, records, and photographs—against fire, theft, and forces of nature. It provides an open and welcoming gathering place for all who want access to those collections. Many heads, hearts, and hands have been involved in this accomplishment. We express sincere appreciation to all who have assisted in any way. The available facilities for housing the Church’s historical enterprise have not always been as grand as the home provided by this new library. During the Church’s early years, record keeping was done in a variety of locations, including the Prophet Joseph Smith’s home, his smokehouse where meat was cured, the Kirtland Printing Office and Temple, an upper room in the red brick store in Nauvoo, and a room in the Nauvoo Temple.

When the Saints were driven from Nauvoo in 1846, the Church historian and recorder of that day, Willard Richards, supervised the packing of existing Church records into two large boxes for the trip west. Once he reached the Salt Lake Valley, it appears that Brother Richards pursued his work in several temporary locations, including the Church office, his own home, the Council House, and the tithing storehouse. Eventually, in 1855, President Brigham Young decided that a new Historian’s Office, combined with a private residence for Brother Richards’s successor, Apostle George A. Smith, would be built on the south side of South Temple Street, opposite the Lion House. On September 15, 1856, in the presence of a handful of clerks then working in the Church Historian’s Office, assistant Church historian and recorder Wilford Woodruff offered a prayer of dedication for that newly completed structure. His words that day are relevant still:

And, by virtue of the Holy Priesthood vested in us, in the name of Jesus Christ, we do dedicate it and consecrate it unto the Lord our God, and we set it apart that it may contain the holy records of the Church and kingdom of God, and we ask in the name of Jesus Christ that it may be sanctified and holy unto thy name and we pray that we may be inspired by the gift and power of the Holy Ghost, while acting as Historians, or clerks for the Church; and may we keep a true and faithful record and history of thy Church and kingdom, and thy servants, and may it be kept in that way and manner that it may be acceptable unto thee, O Lord, and unto thy servants the presidency of thy Church. [1]

Following its dedication, the Historian’s Office served as the location for the work of Church history from 1856 to 1917, a period of sixty-one years. By 1917, a new Church office building, now named the Church Administration Building, had been built in Salt Lake City at an address that has since become very well known: 47 East South Temple. The work and collections of the Historian’s Office had expanded by that time to justify turning the entire third floor of the building over to Church historian Anthon H. Lund and his staff. That location remained the center of Church history operations until once again, in 1972, a move was made to the east wing of the newly constructed Church Office Building at 50 East North Temple. The Church Historical Department did its business in that venue for thirty-seven years, ending with its recent move to this new facility a few weeks ago. Much like the ark of the covenant, which was temporarily housed in the tabernacle during Israel’s wanderings and finally found a more permanent home in Solomon’s Temple, the treasures of Church history have now found a welcome resting place here.

This brief chronology of what we may call the “homes” of Church history has more than mere historical value. Near the end of his life, the Prophet Joseph Smith foresaw dissensions within the Church and knew that apostates would lead many astray. At that time he told the Saints, “I will give you a key by which you may never be deceived, if you will observe these facts: Where the true Church is, there will always be a majority of the Saints, and the records and history of the Church also.” [2] Those records and history now reside safely within the walls of this beautiful facility.

However, far more important than considerations of buildings and facilities is the purpose for which the Lord at the Church’s founding commanded that a record be kept. In a word, God wants us to remember. It is a vital part of our worship of Him and His divine Son. This new Church History Library will play a vital role in helping us remember. To this destination, the mecca of Latter-day Saint history, will flow the stories of the people, places, and events that make up that history. Here historical information will be catalogued, preserved, and shared with a local as well as a worldwide audience. Technology will enable historical information to flow in and out, reaching to and from the remotest corners of the world.

In this process, the hope of all of us charged with keeping the record is as expressed in 1904 by President Joseph F. Smith: That we may “see in every hour and in every moment of the existence of the Church, from its beginning until now, the overruling, almighty hand of Him who sent His only Begotten Son to the world.” [3] That we may indeed come to know and remember the hand of God in the history of this Church and in our own lives is my prayer.