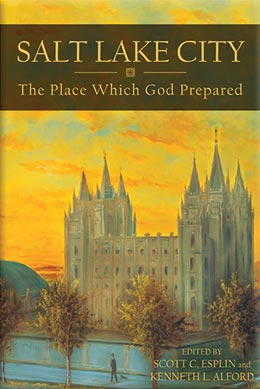 In 1829, almost a full year before the Church was organized, the Lord challenged the Prophet Joseph Smith and his associates to “seek to bring forth and establish the cause of Zion” (D&C 6:6; 11:6; 12:6). Though he vigorously pursued the cause of Zion throughout the remainder of his life, the Prophet’s death left fully establishing Zion as a goal for others to accomplish. Within a few short years after his martyrdom, Joseph Smith’s vision regarding Zion was transported more than 1,200 miles west when Brigham Young and his faithful followers established the City of the Great Salt Lake. Much of the history of Salt Lake City is grounded in the revelations, visions, and plans of the Prophet Joseph regarding Zion, and many of the commandments in the Doctrine and Covenants find their fulfillment in the development of Salt Lake City as the headquarters of the Church. Indeed, in Salt Lake City, “Zion [has] flourish[ed] upon the hills and rejoice[d] upon the mountains” as the Saints have “assembled together unto the place which [God has] appointed” (D&C 49:25).

In 2010, the Department of Church History and Doctrine at Brigham Young University focused its biennial Regional Studies in Latter-day Saint Church History on Salt Lake City. Faculty researched the history of the Church in Salt Lake—its pioneer founding, early growth, and development, as well as its bright present and future. With significant cooperation from several Church departments, the Regional Studies Committee (Craig J. Ostler as chair, along with John P. Livingstone, Scott C. Esplin, and Kenneth L. Alford) led the faculty on a focused overview of the Church’s headquarters. The fruits of that experience are reflected here.

Craig James Ostler analyzes how revelations in the Doctrine and Covenants seem to have guided Church leaders as a pattern for the development of Salt Lake City. Early commands to build a temple, a house for the presidency, a print shop, and a boarding house for strangers see their fulfillment in structures erected in and around Salt Lake’s Temple Square. Next Dennis A. Wright and Rebekah E. Westrup focus on Ensign Peak’s role in laying out the pattern for Salt Lake City. They discuss the historical significance of the peak to early city settlers, address questions regarding its use, and outline its modern transformation.

This volume then turns its attention to historic structures erected by city founders. Richard O. Cowan discusses designing and building Salt Lake City’s crown jewel, the world-famed Salt Lake Temple. Cowan notes several unique aspects of the building’s construction as well as its importance both as a building project for the early Saints and now as the spiritual symbol for worldwide Church membership. Addressing the Temple’s iconic neighbor, Scott C. Esplin turns the reader’s attention to the Salt Lake Tabernacle, the oldest standing structure on Temple Square and the “grand old dame of pioneer Utah.”[2] Esplin discusses the Tabernacle’s witness to Church history, highlighting how both the building itself as well as its use have changed over its lifetime. Kenneth L. Alford and Robert C. Freeman move away from Temple Square to shine a spotlight on the Salt Lake Theatre, “Brigham’s Playhouse.” Alford and Freeman discuss the theatre’s construction and operation, the support it received from Church leadership, its eventual demise, and the legacy of dramatic tradition it left among the Saints. Susan Easton Black concludes the building section, analyzing the visual influence of the Book of Mormon on the settling of Salt Lake. Her article focuses on the use of images of the beehive and of Deseret, prominent in the famed Beehive House but also common in less-familiar aspects of the city’s history.

Moving from structures to individuals, this volume shifts to the stories of early settlers. Fred E. Woods shares his expertise of Mormon migration, chronicling the gathering places throughout the valley for nineteenth-century emigrants while highlighting how they were received by and assimilated into their “City of Zion.” Arnold K. Garr draws attention to the numerous and significant contributions of Thomas Bullock. “The Lord’s Clerk,” Bullock participated in many of the historic details regarding the founding of Salt Lake City, preserving the legacy for future posterity. Bidding farewell to the city’s founding fathers, David F. Boone captures the little-known story of Salt Lake’s pioneer burial grounds. Boone highlights the beautiful Salt Lake City Cemetery, final resting place to numerous pioneers and Church leaders, and the private cemeteries, including the Brigham Young, Heber C. Kimball, Newel K. Whitney, Willard Richards, and John Smith family burial plots. The final chapter on Salt Lake’s citizens centers on the relationship between the Saints and the federal government, in telling the story of Camp Douglas. Kenneth L. Alford weaves a narrative of conflict between the two parties, highlighted by the actions of the chief antagonists, President Brigham Young and Colonel Patrick Edward Connor.

The final section of the book focuses on various Church departments and organizations that, because of Salt Lake’s role as the world headquarters of the Church, leave a mark on the city’s rich history. Matthew O. Richardson begins with the most prominent of the city’s Church organizations, the First Presidency, and the history of the Church Administration Building. His chapter chronicles the construction of Salt Lake’s version of “a house for the presidency” (D&C 94:3) its symbolic significance for the entire Church. Michael A. Goodman continues analysis of the twentieth-century Church, discussing the development of correlation, a program centered in Salt Lake but also, though its influence on programs and publications, extends worldwide. Similarly, John P. Livingstone narrates the growth and development of LDS Family Services, another Salt Lake-based organization charged to provide spiritual and temporal aid to God’s children across the globe. While programs like correlation and LDS Family Services take Salt Lake and the mission of the Church internationally, other significant Church efforts like family history research invite the world to Salt Lake. Kip Sperry’s article highlights how the Church’s mission to provide salvation for all of God’s children, living and dead, has transformed Salt Lake City into the international center for family history research. One of the city’s most famous organizations, the Mormon Tabernacle Choir, through its television and radio show Music and the Spoken Word, has in many ways similarly connected Salt Lake with the world. Lloyd D. Newell traces the history of the Choir’s eight-decade long impact, highlighting how its weekly messages transport Salt Lake City and the Church into millions of homes worldwide. Finally, Craig J. Ostler concludes this volume, connecting early Saints’ zeal to create Zion with its modern establishment in Salt Lake City. Looking forward to millennial glory, Ostler discusses Salt Lake’s past in anticipation of a destined future.

Throughout this volume, the authors echo the message that reverberated with our pioneer forefathers during their westward trek. We invite readers, as they did, to “Come, Come, Ye Saints” and learn about the history of the Church in Salt Lake City—a city that has been, and continues to be, “the place which God for us prepared.”[3]