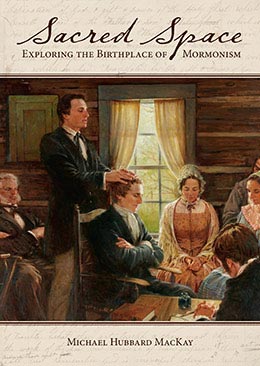 Exploring the Birthplace of Mormonism

What Did Joseph Smith and Oliver Cowdery Say about the Location?

Though Fayette held very little significance to Campbellites who joined the Church in Kirtland, Ohio, or British immigrants who met Joseph Smith in Nauvoo, Illinois, Joseph Smith and Oliver Cowdery consistently claimed that the Church was organized in Fayette, in spite of the fact that most of the earlier sources are inconclusive about where the Church was established.[1] There are three documents attributed to Smith and/or Cowdery that indicate where the Church was established: the first was found in The Evening and the Morning Star, which included a copy of the conference minutes that Smith presided over on 3 May 1834; the second is found in two deeds that Cowdery signed for Smith in 1834; and the third is found in drafts of Smith’s history. Irrespective of the printed literature and the inconsistent contextual accounts, these three sources demonstrate firsthand what Joseph Smith and Oliver Cowdery taught and recorded privately about where the Church was established. A fourth source will also be discussed in the next chapter.

The Evening and the Morning Star. In May 1834 Joseph Smith presided over a meeting in Kirtland, Ohio, where he addressed where and when the Church was established. Oliver Cowdery and Frederick G. Williams took minutes of the meeting, which they later published. Once the Church’s printing operation was destroyed in Independence, publication of The Evening and the Morning Star was moved to Kirtland, Ohio, where Smith had closer interaction with what was being printed, and Cowdery became the printer. The second issue in May 1834 definitively claimed to know where the Church was established. Upon Smith’s request, the conference discussed changing the name of the Church. The minutes stated that “appropriate remarks were delivered by some of the members, after which the motion was put by the Moderator [Smith], and passed by unanimous voice.” The newspaper publication reproduced a signed copy of the minutes. Where the Church was originally organized was clearly discussed, and Cowdery wrote in the minutes that the Church “was organized in the township of Fayette, Seneca county, New-York, on the 6th of April, A. D. 1830.” This was not just any statement about historical location. It is the only surviving account that includes a signed endorsement by Smith. Though the original minutes are not extant, the printed version includes the names of Joseph Smith, Frederick G. Williams, and Oliver Cowdery to represent that they signed the original document.[2] Unlike other possible signatures of Joseph Smith in print, these minutes explicitly report the conference’s resolution that the “minutes be signed by the Moderator and Clerks, and published in The Evening and The Morning Star.” This early signed statement from Smith and Cowdery, the principal founders of the Church, must be taken as a strong indication that the Church was organized in Fayette.[3]

The whole point of the meeting and the subsequent public declaration soon thereafter was to connect the original church (the Church of Christ, 6 April 1830) with the 1834 Church after the name was changed.[4] Identification of the old Church was very important, and where it was established was helpful information. It is extremely difficult to identify a realistic scenario that would allow Joseph Smith to take advantage of falsifying the location. Legal ramifications for debt and taxes could have potentially offered a way for the Saints to start with a clean record if they had a new name and were disconnected from previous debt. However, the documents below clearly provide evidence for maintaining the Church’s identity from 1830 through 1834. Furthermore, changing the location of where the Church was established is hardly a way of avoiding debt collectors or taxes. 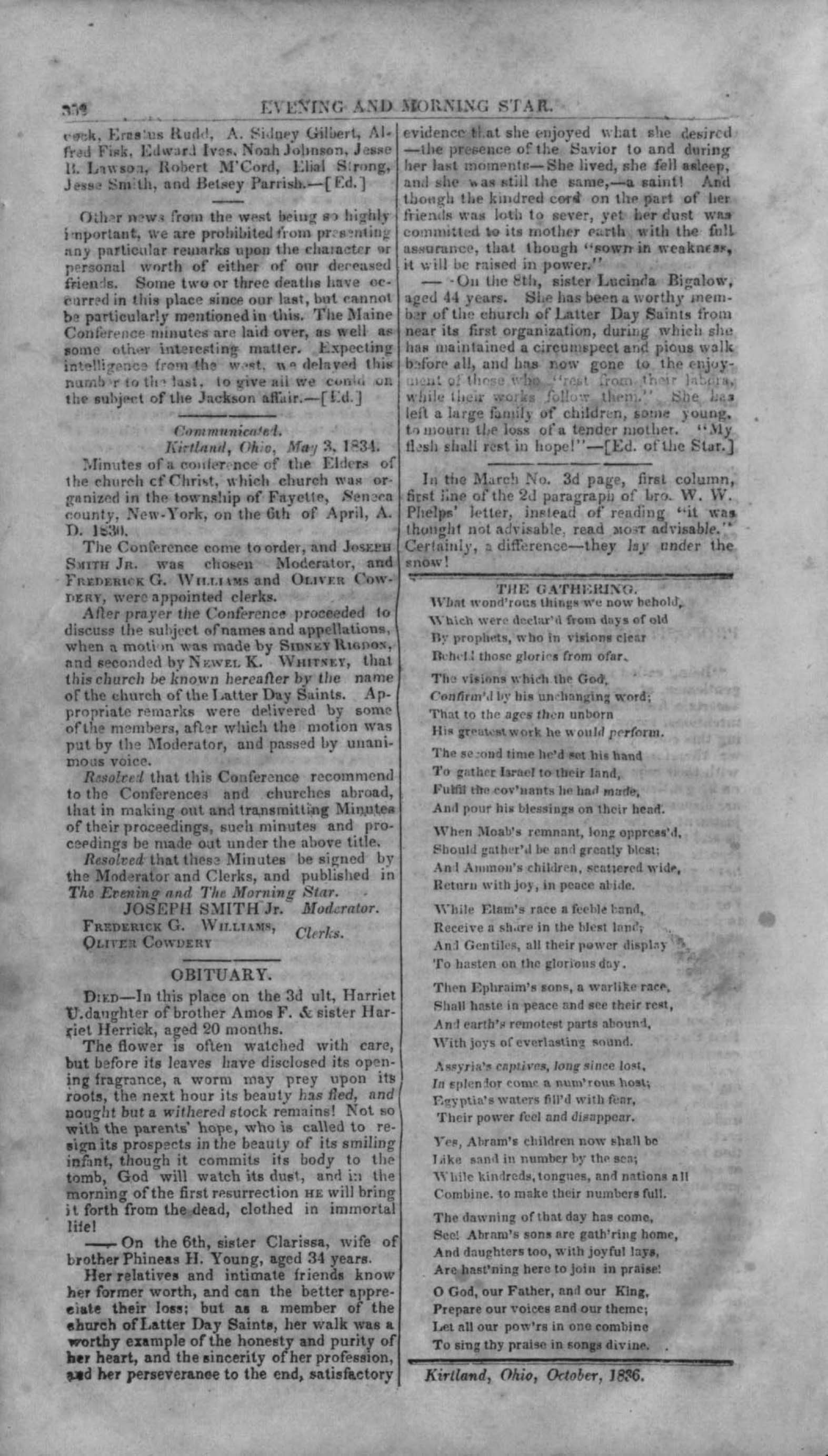 This document required Joseph Smith and Oliver Cowdery to substantiate together where the Church was established. Having both been there, they would have been forced to agree upon the location in the presence of other leaders of the Church, followed by a public declaration of the same. The newspaper was also circulated to all of the Saints, some of whom may have also been at the establishment meeting. They had the ability to question Smith and Cowdery about the location. Therefore, it seems the public declaration certified the location, since it would fall under the eyes of the Whitmer and Smith families, who were the most likely attendees on 6 April 1830.

1834 Deeds. In addition, just days after the meeting, Cowdery signed two indentures that placed the Church organization in Fayette.[5] He signed an indenture with John Johnson for a piece of land in Kirtland, Ohio, that named Joseph Smith as the president of the Church of Christ. Legal indentures named the relevant parties in the agreement at the top of the form and often included a person’s occupation to clarify his or her identity. In the case of this indenture, they also clarified that the Church was organized “in the year of our Lord eighteen-hundred and thirty in the township of Fayette, Seneca County and the State of New York.”[6] Indentures also required the parties who were involved to sign the agreement in the presence of a justice of the peace to verify signatures and the consent of each of the parties. Though the minutes mentioned above were printed as if they had been signed by Joseph Smith and Oliver Cowdery, in the case of these indentures a disinterested third-party official verified that Cowdery had signed the documents.[7]

Though the signed minutes of the 3 May 1834 meeting are a powerful witness of the location, two signed deeds offer an additional record that are legally relevant. In both cases, at least Smith or Cowdery was faced with a legal question about where the Church was established, and in both cases the two men openly signed the deeds, knowing that they were public records and notarized legal documents. The purchase of land and changing of the Church’s name were likely the first time the location of the establishment became deeply important. Regardless of what others thought in the past, Joseph Smith and Oliver Cowdery were forced to sign legal documents that claimed they knew exactly where the Church was established.

Joseph Smith History, 1839. When Smith compiled his official history in 1839, he also recounted that the Church was organized in Fayette. Smith was assisted in 1839 by James Mulholland, whose initial draft of Smith’s history arranged the chronology of early events according to the order of the revelations as given in the 1835 Doctrine and Covenants. He left blanks where the text of each revelation would later by inserted, but primarily followed the Doctrine and Covenants to compile the history around the revelations.

Because Mulholland played a significant role in compiling and writing the history, it is difficult to know just where Smith’s initiation of the project ended and where Mulholland’s implementation of the project began. However, there was clearly significant interaction between the two. For example, in the portion of the narrative regarding the hill from which Joseph Smith claimed to have discovered the gold plates of the Book of Mormon, Mulholland pressed him for further detail. A slip of paper pinned to the history at that point bears the following inscription on the front: “Convenient to the village of Manchester, Ontario Co., New York, Stands a hill of considerable size, and the most elevated of any in the neighborhood, on the west side of this hill not far from the top.” And it bears the following inscription on the back: “I mentioned to President Smith that I considered it necessary that an explanation of the location of the place where the box was deposited would be required in order that the history be satisfactory.”[8] This example shows, in particular, Mulholland’s interest in matters of place. There are several other points in the history that would have required more involvement on Smith’s part, especially when Mulholland filled in narrative among the revelations for 1829 and 1830 where there are no supporting documents or accounts about what happened.

This is pertinent because unlike the early manuscript books of revelations, the 1835 Doctrine and Covenants left out the location where Joseph Smith dictated the 6 April 1830 revelation. Mulholland could not rely on the primary source that he used to compile the history and would have needed to seek out Smith’s help about where the revelation was dictated. Though he most likely asked Smith about the event, even if he posed the question to someone else, found the location in another source, or deduced it himself, it is significant that he somehow came up with Fayette as the location. He clearly did not rely on the Book of Commandments or on the early statements published by W. W. Phelps. Again, the most likely source for his information is the man whose history he was engaged in producing.

All of the drafts consistently gave Fayette as the place where the Church was organized. There are three primary drafts of the history that gave accounts about the meeting and a final fair copy, as well as the published version. Each of the three primary drafts essentially stated that those who attended the organization meeting “met for that purpose, at the house of Mr Whitmer on Tuesday the sixth of April.”[9] Though Mulholland worked on the first two drafts, a third draft was made, as well as a fair copy of the third draft. Howard Coray worked on the third and fourth manuscripts and was given liberty to correct mistakes.[10] It is also clear that he had worked with Joseph Smith to make further historical revisions. Smith’s interaction with his history and his signed approval of the 1834 minutes provide evidence that he consistently held that the Church of Christ was organized in Fayette.

Joseph Smith’s history eventually became one of the most valued historical documents to Latter-day Saints. Perhaps to a fault, the Saints took the history at face value and rarely doubted whether it was accurate or not until the recent past, especially because of the work of the Joseph Smith Papers Project. Latter-day Saints accepted Fayette as the founding location, and also valued the actual location with very little concern for the documentation of that site. It was a place of the past, significant only to those who were interested in the Church’s history, until the details of the location were more fully examined in the twentieth century. The blind acceptance of Fayette as the founding location did very little for the location’s sacredness in the lives of the membership. Its significance was not celebrated, and the location was an arbitrary historical detail.

[1] Though largely written by others, the Wentworth letter was published by Joseph Smith over his signature, and unlike his other accounts it stated that the Church was established in Manchester. This can be understood by the fact that it was a compiled document and that the location of the meeting was copied from Orson Pratt’s Remarkable Visions, a mistake that Pratt changed after Smith’s history was published stating the founding meeting was in Fayette.

[2] One might conjecture that Smith at least read if not also signed his letter to John Wentworth, which was printed under his name in the Times and Seasons.

[7] Marquardt believes that these deeds demonstrate that Smith was trying to change the name of the Church to avoid paying New York debts, and that by changing the place that the Church was established in an official document he would also deter any collector from identifying the Church. This is conjecture without evidence. Since there was no incorporation of the Church in 1830, the only real identifier of the Church was the fact that Joseph Smith and associates affirmed that they had established such a religious society. Regardless of whether it was founded in Fayette or Manchester, the Church can be identified only by its founder, especially in this deed which names Smith as the founder.