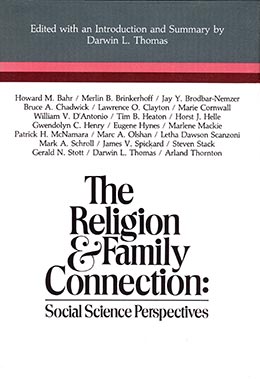 Gerald N. Stott was an associate professor of sociology at Southeast Missouri State University, Cape Girardeau, when this was published. He received his PhD from Southern Illinois University.

Folk wisdom informs us that “As the twig is bent so grows the tree” and that “The child is the father of the man.” Biblical verse (Proverbs 22:6) declares, “Train up a child in the way he should go: and when he is old, he will not depart from it.” The family is considered a primary force in shaping the values and attitudes of its members, especially its young members.

Children are typically socialized (or indoctrinated) by the religious beliefs and practices of their parents. In fact, many parents feel morally bound to instruct their children in religious matters. Just how effective is this indoctrination? Does the “tree” really grow as the “twig” is bent? If so, a strong positive correlation should exist between the religious involvement of parents and their offspring. Moreover, this correlation should occur not only when the offspring are young and under the supervision of their parents, but also after children become adults and leave their parents’ supervision.

Extant research typically supports the belief that parents do indeed influence the belief and practices of their offspring, but disagreement exists as to the strength of the influence. See, for example, reviews of research on the topic by Hyman (1959), Kalish and Johnson (1972), and Hoge et al. (1982). In his review of previous research, Hyman (1959) found generally “moderate” correlations between the values of parents and their offspring (the median Pearson’s r for the numerous studies cited was approximately .5). Bengtson (1975: 369) in a three-generation study reported weak to moderate value transmission and concluded that “generalizations concerning family influences on the development of values should be made with caution: similarities between parents and youth reflect their commonality of social location rather than direct transmission.” Necombe and Svehla (1937) found “high” correlations between parent and child attitudes for their heterogeneous religious sample but much weaker correlations in their subsamples of strongly religious people in specific denominations. They also noted declining correlations with increasing age of the offspring. A study of alcohol and drug usage among college students by Perkins (1985) found parental attitudes to have little direct effect on their offspring’s alcohol and other drug usage. Commitment to Judeo-Christian traditions was, however, found to be a significant moderating influence.

Focusing specifically on religious involvement, Hoge, Petrillo, and Smith (1982) report generally “weak” parent/child correlations. Furthermore, they found denomination to be a better prediction of adolescent religious involvement than parental religiosity. Kalish and Johnson (1972) found daughter/mother correlations on a religious value scale to be noticeably stronger than mother/grandmother correlations. They concluded that value similarities between generations are strongest between the adjacent generations who have most recently lived together. A recent study by Potvin and Sloane (1985) reports that adolescents whose parents are regular church attenders are five times more likely to score high on religious practice than adolescents whose parents are infrequent or nonchurch attenders. Furthermore, Hunsberger (1980) reports noticeably negative relationships between parental religious instruction and religious apostasy of the child. Dudley and Dudley (1986), however, report only moderate relationships between the religious values and attitudes of parents and those of their adolescent offspring.

Variances in the strength of the parent/child relationships cited can, in part, be explained by (1) the fact that parent/child behavior correlations are typically stronger than parent/child value correlations; (2) the subjective nature of such terms as weak, moderate, or strong (e.g. Bengtson, [1975], reports “weak to moderate” intrafamily value transmission with an r of .53 on one of his two scales, while Hoge and Petrillo [1978], report r’s of .48 and .60 as evidence of “very strong” parental influence); and (3) the age of the child—parental influences typically decline as the child becomes older and more independent.

This paper specifically investigates the short- and long-range influence of familial religious socialization among Southern Baptists and Mormons (members of The Church of Jesus Christ of Latter-day Saints). Both of these denominations have high retention rates among their members (Roof and Hadaway, 1979) and emphasize childhood religious indoctrination.

Mormon doctrine, for example, declares: “And again, inasmuch as parents have children in Zion, or in any of her stakes which are organized, that teach them not to understand the doctrine of repentance, faith in Christ the Son of the living God, and of baptism and the gift of the Holy Ghost by the laying on of the hands, when eight years old, the sin be upon the heads of the parents” (Doctrine and Covenants 68:25).

Table 1. Correlations* between Past and Present Measures of Religious Involvement for Mormons and Southern Baptists

Notice in Table 1 that parental church attendance correlates only weakly with respondents’ adult church attendance: the father/adult respondent correlations are .05 for the Mormons and .22 for the Baptists, and the mother/adult respondent correlations are .13 and .10 respectively. Also weak and typically nonsignificant are the correlations of parental church attendance with the other measures of their adult offspring’s religious involvement (that is, testimony, prayer, tithing, and self-reported religiosity). It appears that the impact of parental religious socialization is rather transitory, waning considerably after the child becomes an adult.

The relatively temporal effect of parental religious socialization is further supported by the fact that only mild correlations exist between the respondents’ childhood and adult attendance (Mormon .16, Baptist .12) and between childhood and adult religiosity (.29 and .18 respectively). In addition, these two measures of childhood religiosity correlate only weakly with three other measures of adult religious involvement: testimony, tithing, and prayer.

The final variable in Table 1 which remains to be examined is the number of best friends who are of the same faith as the respondents. Correlations between “friends” and the respondents’ five adult religious measures range from .42 to .61 for the Mormons and from .30 to .49 for the Baptists, and are all significant at the .001 level.

It is possible that my analyses are inadequate. Intervening variables could be masking the true relationships. Such a variable could be convert status. It is well-known that both Baptists and Mormons are quite active in proselyting. In my sample, 56 percent of the Mormons and 53 percent of the Baptists are converts. If the converts were raised, by and large, in homes in which there was little religious involvement but after conversion as adults became religiously active, a strong correlation would exist between parent and child religious involvement, but a weak or possibly negative correlation would exist between parent and adult-child religious involvement. If the parent/child and the parent/adult-child correlations are both strong for the lifelong members, the negative or weak parent/adult-child convert association would mask over the strong association for the lifelong members.

Controlling for convert status, however, does make a difference in the child/adult correlations, particularly for the Mormons. In Table 1 the correlations of childhood church attendance with the five measures of adult religious involvement range from .14 to .19 for the Mormons and from .07 to .18 for the Baptists. When converts and lifelong members are differentiated (Tables 2 and 3), the Mormon correlations range from .36 to .44 for the lifelong members but from only .03 to .08 for the converts; corresponding correlations for the Baptists range from .14 to .36 and from -.02 and .16 respectively. Childhood religiosity correlations follow the same pattern. Thus, for the converts of both denominations childhood religious involvement shows little relationship to adult religious involvement; but among the lifelong members the childhood/adult religiosity measures are substantial for the Mormons and typically moderate for the Baptists.

Interestingly, lifelong member correlations between measures of childhood religious involvement and best friend’s religion or spouse’s religiosity are, in general, moderately strong. Contrary to my earlier conclusions, this suggests that for lifelong members the selection of spouse and friends (as well as socialization after selection) influences the high respondent/spouse and respondent/friends correlations.

These findings support the vast majority of research on socialization. My emphasis on the critical role of temporal primary groups helps us to understand why parent/offspring correlation on values and behavior vary so much in strength from study to study. As the child ages, the primacy of the family of orientation wanes. It becomes less and less a primary group for the child, while other groups (friends, spouse, etc.) become more primary. Thus parent/child correlation tends to vary from strong for children to weak for adult offspring.

While a tree may grow as “the twig is bent,” humans are more supple than old wood. Present “bending” more than past “bending” directly shapes present religious involvement. Present influences, however, are naturally shaped by past influences.

As Bengtson (1972: 369) points out: “The family serves as an important mediating link in selecting or orienting the child to the multiple reference groups to which he or she can turn for value development in a pluralistic society.” Parental religious indoctrination, hence, has an indirect, if not a direct, influence on the religious involvement of adult offspring.

Which category best described you during your last year of high school (or when you were 17 years old)?

(1) not at all religious

Have you received spiritual confirmation of the truthfulness of the gospel?

Of your five closest friends, how many are members of your denomination?

Last year what percentage of your income did you contribute to religion?

(1) zero or almost nothing

How often do you pray privately?

(2) I pray only on special occasions

(3) I pray once in a while but not regularly

(4) I pray several times a week

How often do you attend Sunday worship services?

(5) every week or just about

(4) two or three times a month

How frequently did you, your father, and your mother attend church during your last year of high school (or when you were 17 years old)?

Which category best describes you (your spouse)?

Hunsaker, B. 1985. “Parent-University Student Agreement on Religious and Nonreligious Issues.” Journal for the Scientific Study of Religion 24: 314–20.

Hunsberger, B., and L. B. Brown. 1984. “Religious Socialization, Apostasy and the Impact of Family Background.” Journal for the Scientific Study of Religion 23: 239–51.

Perkins, H. W. 1985. “Religious Traditions, Parents and Peers as Determinants of Alcohol and Drug Use Among College Students.” Review of Religious Research 27: 15–31.

Troll, L. E., B. L. Neugarten, and R. I. Kraines. 1969. “Similarities in Values and Other Personality Characteristics in College Students and Their Parents.” Merrill-Palmer Quarterly of Behavior and Development 15: 323–36.