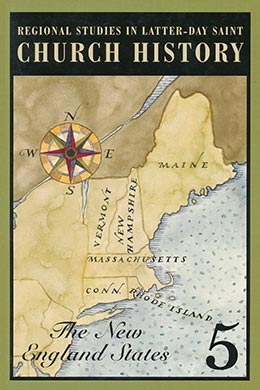 After the Church was organized in 1830, Jared Carter became the first Latter-day Saint to do missionary work in New England. In 1831 he preached the gospel in Benson, Vermont, where he baptized twenty-seven people and organized a branch. By 1832 the gospel had also spread to Massachusetts, New Hampshire, Maine, Connecticut, and Rhode Island. Missionary work continued, but after the pioneers fled from Nauvoo to the Salt Lake Valley, most of the faithful Saints still in New England also migrated to the Rocky Mountains.

In 1893 the Eastern States Mission was reopened, and soon thereafter all of the New England states were within its jurisdiction. Since that time the Church has experienced steady growth in the area. By the end of the year 2000, New England had over fifty-seven thousand members, thirteen stakes, ninety-five wards, and a temple in Boston, Massachusetts.

During summer 2002, faculty members from the Department of Church History and Doctrine at Brigham Young University visited many of the Church history sites in New England. Several members of the group took the opportunity to research and write essays having to do with the history of the Church in the region. This volume contains twelve essays that emphasize the noteworthy achievements of the Latter-day Saints in that specific area of the United States.

In “Building the One Hundredth Temple: A Test Case of Religious Freedom in New England,” Richard O. Cowan and Mary Jane Woodger skillfully trace the legal and political struggles the Church had to endure in its quest to build the Boston temple, Massachusetts. It was an ordeal that lasted six years. The process led to “the introduction of two bills in the Massachusetts Legislature” and “spawned a bill in the United States Congress.”

Lawrence R. and Elaine M. Flake acquaint readers with the life and contributions of an important local Church leader in their essay, “Wilbur W. Cox: First President of the Boston Massachusetts Stake.” The article discusses how a one-time jack Mormon became a dynamic stake president.

Arnold K. Garr, in his article, “Joseph Smith for President: The Quorum of the Twelve Apostles in New England,” chronicles the activities of seven Apostles who campaigned for the Prophet during the 1844 presidential election.

Historian Andrew H. Hedges reminds readers that Latter-day Saint missionaries who preach the gospel to people of Lamanite descent “often build upon the work of others—that is, missionaries of other faiths who had previously introduced American Indians to Christianity through the Bible.” His paper, “Setting the Stage: John Eliot and the Algonquins of Eastern Massachusetts, 1646–90,” recounts “the missionary efforts of the Puritan minister John Eliot” who worked with Native Americans.

In “‘Eighteen Hundred and Froze to Death’: Mount Tambora, New England Weather, and the Joseph Smith Family in 1816,” authors Ray L. Huntington and David M. Whitchurch claim “there is sufficient evidence to suggest that the Smiths’ move” to New York “was in some measure a result of Tambora’s eruption and its impact on weather conditions in New England.”

Roger R. Keller’s “Unitarianism: Part of the Background of the Restoration” sketches the rise of that denomination in the seventeenth, eighteenth, and nineteenth centuries. It then highlights the similarities and differences between Unitarians and Latter-day Saints. Craig K. Manscill outlines proselytizing efforts, policies, and procedures in “Missionary Activities in New England in the Early 1830s.” He claims that converts were attracted to the gospel for two basic reasons: “the power and uniqueness of the message and the diligence adhered to by the missionaries.” In his essay, “Growth of the Church in New England as Witnessed by Truman G. and Ann N. Madsen,” W. Jeffrey Marsh pays tribute to an influential family. He claims that “few people living along the Wasatch Front have had as great involvement” in the history of the Latter-day Saints in New England as the Madsen family.

Craig J. Ostler, in his photo essay titled “Glimpses of Church History in New England,” captures images of many of the most important historical sites visited by the faculty during their summer tour in 2002. Included are photographs of the Joseph Smith Memorial grounds in Sharon, Vermont; monuments commemorating the birthplace of Brigham Young in Whitingham, Vermont; and the Baptist church at which Wilford Woodruff taught on the Fox Islands.

Matthew O. Richardson shares insights into the life of an important sculptor in his article “Voices of Warning: Ironies in the Life of Cyrus E. Dallin.” The essay maintains that even though two of Dallin’s most recognizable works are “his statues of Paul Revere and the angel Moroni, . . . there are few who can accurately name the artist of the statues.”

“Nathaniel H. Felt: An Essex County Man,” by Fred E. Woods, reviews the life of a man who was born in Salem, Massachusetts, became converted to the Church, and then gathered with the Saints, first in Illinois and eventually in Utah. The article provides a tribute to a man who was “anxiously engaged in Church as well as state affairs.”

Finally, Dennis A. and Geoffrey A. Wright maintain that while much has been made of Joseph Smith’s limited education, “little has been said about what education he did have.” Their essay, “The New England Common School Experience of Joseph Smith Jr., 1810–16,” gives insights into the common school education Joseph Smith received before age twelve.

We would like to extend our appreciation to Andrew C. Skinner, dean of Religious Education, and Paul H. Peterson, chair of the Department of Church History and Doctrine, for their support of

this project. Finally, we express our gratitude to those in the Religious Studies Center who helped prepare this work for publication— Richard D. Draper, managing director, R. Devan Jensen, executive editor, and Charlotte A. Pollard, office manager.