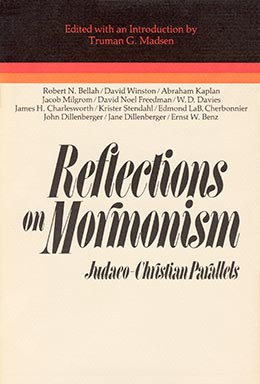 The seed of this symposium was a seminar planned by John Dillenberger and myself at the Graduate Theological Union in Berkeley, California. We conceived a joint course to trace the rise and the decline of many American religious movements and then present Mormonism as one of the flourishing survivors. Initially we thought to invite social experts, historians and theologians to do their best by way of “explanation.” John Dillenberger, as a Reformation theologian, would work from the outside in, and I, as a Mormon, would work from the inside out. We shared the conviction that ideas make little difference in the long run unless they are alive-numinous, and that the numinous ideas of revelation and restoration give Mormonism its sweep and inclusiveness and coherence.

We soon realized that America qualifying as a cradle but not as a parent is too myopic a context; and then we decided to turn the class into a symposium and to bring experts in classical religious studies into the picture. This symposium was the result. What the participants brought in common was a detailed mastery of at least one strand of Judaeo-Christian teaching; a willingness to do the hard work of studying a segment, at least, of the Mormon ethos; and, not just as a bonus but as a crucial prerequisite, a depth of religious interest which manifests and does not simply talk about the quest for the holy. The participants were friendly to each other—and to the idea.

The device we decided upon was “parallels,” the pursuit of similarities and, by that process, of course, differences. Thus, with two exceptions, the papers are not couched in the mode of defense or polemic. They are devoted to comparative analysis of parallels in Mormon and traditional understanding. And though these writings disclaim a special mastery of Mormonism and speak tentatively, they likewise avoid the more hazardous enterprise of dogmatizing common origins, influences, and specific debts. Their topics are by no means exhaustive of Mormon teaching, but they do provide a beginning cross-section.

Response from many quarters was extensive and solid, and the results appear already apparent are twofold: first, a deepening of self-understanding within the Mormon community; second, a wider and deeper scholarly interest in Mormon studies. Several of the articles published in this monograph will appear elsewhere in the journals of the learned world.

In coming to Brigham Young University the contributors neither assumed nor intended endorsement of its religious rootage nor of each other’s views, but this in no way diminished the good will of the group; and Krister Stendahl spoke for all of us when he said he found that it increased rather than decreased his confidence to say, with the Book of Mormon, “If there are faults they are the mistakes of men.”

To enhance the availability of Mormon source materials, a selective bibliography is included.