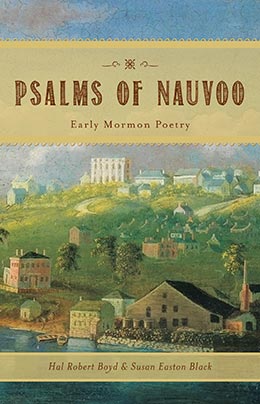 “An Acrostic on the Great Mormon Prophet”

“All Hail to Our Chief”

“Americans: A Poem in Blank Verse”

“In Ancient Days, by Scorn”

“The Answer: A Vision”

“The Assassination: Of Gen’s Joseph Smith and Hyrum Smith First Presidents of The Church of Latter-day Saints; Who Were Massacred by a Mob, in Carthage, Hancock County, Ill., on the 27th June, 1844.”

“Baptism for the Dead”

“Behold the Temple of the Lord”

“Come Listen to a Prophet’s Voice”

“Cry of the Martyrs”

“The Death of the Prophets”

“Early This Spring We Leave Nauvoo”

“The Female Relief Society of Nauvoo: What Is It?”

“The Gathering of Zion”

“Go Forth Ye Herald and Proclaim”

“The Goodly City of Nauvoo”

“I Thought of the Place Where the Two Martyrs Rest”

“Joseph Now Has Gone to Rest”

“Joseph, Our Brother, Is Dead”

“Joseph’s Rest Is Sweet and Glorious”

“The Kidnapping of Gen. Joseph Smith”

“The Latter Day Saints: A Poem in Two Cantos”

“Let the Mountains Shout for Joy”

“Let Zion and Her Children Mourn”

“Lines Written on the Birth of the Infant Son of Mrs. Emma, Widow of the Late General Joseph Smith”

“The Martyrs of Jesus: Safely Lodged behind the Vale”

“The Mobbers of Missouri”

“The Noble, Brave Boys of Nauvoo”

“O, Give Me Back My Prophet Dear”

“O, Missouri, How Art Thou Fallen!”

“On the Death of the Prophet”

“On the Death of the Prophet and Patriarch of The Church of Jesus Christ of Latter-day Saints. Shall They Live Again?”

“Our Union Then, Will Be Increased”

“A Poem on the Suffering of the Saints in Missouri”

“A Portrait of the Missouri Mobs: A Poem”

“Praise to the Man”

“Pratt’s Defense: Before the Authorities of Missouri”

“A Question on My Mind Appears”

“Sacred to the Memory of Joseph and Hyrum Smith”

“The Slaughter on Shoal Creek”

“Song of the Exiled Saints”

“The Temple of God”

“The Temple of God at Nauvoo”

“Thou Great Eternal of Eternity: The Life of President Joseph Smith—Two Chapters”

“Thou Persecuted of Nauvoo”

“To a Ringleader in the Late Missouri Persecution”

“To He Knows Who”

“To His Excellency Governor Carlin”

“To President Joseph Smith and His Lady Presidentess Emma Smith”

“To the Citizens of Quincy”

“The Transformation—or the Tool and the Gem”

“The Two Martyrs, Sent of God”

“The Upper California, O That’s the Land for Me”

“A Voice from the Prophet ‘Come to Me’”

“Ye Saints of God on Whom All Earth May Gaze”

“You in Your Last, Wished Me to Write”

“Zion in Captivity, a Lamentation”