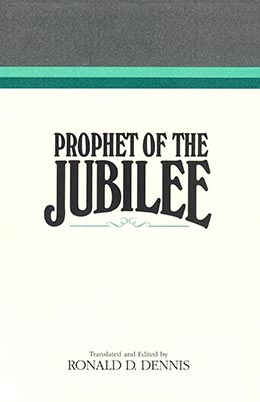 The first meeting between Captain Dan Jones and the Prophet Joseph Smith on 12 April 1843 at Nauvoo, Illinois, was a positive experience for both men. Joseph Smith took an immediate liking to Jones and his steamboat, the Maid of Iowa. And as a recent convert to Mormonism, Dan Jones became an ardent admirer of the Prophet Joseph. Exactly one month later the two became business partners when Joseph Smith purchased a half interest in the Maid of Iowa from Levi Moffat, Jones’s original partner.

In May 1844 Joseph Smith negotiated with Dan Jones to buy the other half of the steamboat and thus allow Jones to be off to his native Wales on the mission he had been called to serve a year earlier. The following month he said to Jones: “I have a check in the house for $1200 as soon as I can get it cashed you shall have $1100 of it, and the start for Wales, not with your fingers in your mouth but prepared to buy a press, and do business aright” (Jones to T. Bullock, 20 January 1855, LDS Church Archives). Because of the Martyrdom of Joseph Smith a short time later, Jones did not ever receive the aforementioned check; however, Brigham Young, the Prophet Joseph’s successor, sent an order for $500 to the Liverpool office of the Church of Jesus Christ of Latter-day Saints on which Jones was allowed to draw for his living expenses and his publishing activities as a missionary in Wales.

Dan Jones arrived in Great Britain in January 1845 and was assigned to North Wales where his family lived. Within three months he published his first pamphlet to assist him in propagating Mormonism to his compatriots. (For particulars of this forty-eight-page publication see my Welsh Mormon Writings from 1844 to 1862: a historical bibliography [Provo, Utah: Brigham Young University Religious Studies Center, 1988], pp. 13–16.) But neither this pamphlet nor any others of Jones’s first mission to Wales were published on a press owned by Jones. Lacking sufficient money to purchase his own, Dan Jones was forced to rely on the presses of others.

Coincidentally, Jones’s brother John owned and operated a press in the little village of Rhydybont, near Llanybydder in Carmarthenshire. And although the Reverend John Jones was an ordained Congregational minister, he permitted the use of his press for his younger brother Dan to promote the cause of Mormonism. His press was soon labeled “the prostitute press” by other ministers because its services were sold to the “enemy” of all other Christian religions in Wales—the Mormon Church. The Reverend Jones made money not only by printing the materials of the Latter-day Saints, but also by preaching against their doctrines from his pulpit. Ironically, the Reverend’s wife and daughters later converted to Mormonism.

The first item printed on the press at Rhydybont was Dan Jones’s translation of Proclamation of the Twelve Apostles in early December 1845 (see Welsh Mormon Writings, pp. 16–19). Later that same month Elder Dan Jones received the assignment to move to Merthyr Tydfil and preside over the LDS missionary effort in all of Wales. Elder William Henshaw had been in Merthyr Tydfil for nearly three years and had established in the midst of considerable opposition a few branches of the Church with a total of nearly five hundred members. The opposition from the press and over the pulpit increased in proportion to the growth of the Latter-day Saint movement

To answer the criticism of Mormonism’s adversaries Dan Jones published in early February 1846 a twenty-four-page pamphlet entitled Reply to the objections which are most commonlybrought throughout the country against the Latter-day Saints (see Welsh Mormon Writings, pp. 20–23). The wrapper of this publication contains the prospectus for a monthly periodical that Dan Jones intended to begin in June 1846 and one that he intended to call Prophwyd y Jubili (Prophet of the Jubilee).

This curious publication made its debut in July 1846, just one month after Jones’s predicted date. On the second page of the July 1846 wrapper, Jones’s enthusiasm about this momentous occasion for all Welsh Latter-day Saints is clear: “Is everyone allowed to put out his magazine but us? Is the press locked against us? Is that the freedom of Wales in the nineteenth century? Have the monthlies been locked? We shall open our own monthly, then. Has the press been polluted by libeling us? We shall cleanse it by defending ourselves, then.” Several religious periodicals had published anti-Mormon articles but then refused to publish the rebuttals sent them. With his own publication the feisty Captain Jones believed that he was now on even ground with his numerous opponents. In each issue he could answer the charges made against Mormonism, as well as defend, expound, and clarify the doctrines of the faith he had adopted just three years earlier. He proceeded to do all of these things with great relish and enthusiasm.

The typesetting and printing of all but the final two issues of Prophwyd y Jubili were done on the press at Rhydybont. Its basic layout, size, and appearance are virtually identical to those of Y Golygydd (The Editor), a periodical begun by Dan Jones’s brother John in January 1846.

The title that Dan Jones gave to his periodical was probably inspired by Orson Pratt’s The Prophet, a publication that Jones came to know as he passed through New York en route to Wales in late 1844. Because the title of Prophwyd y Jubili was changed after the December 1848 issue, the series is complete with the thirty issues that were published during the preceding two-and-a-half years. The final two issues of Prophwyd were printed on the press of John Davis in the town of Carmarthen, and the same

Each of the six issues of Prophwyd for 1846 came with a four-page printed wrapper. When the wrappers were bound with the issues of Prophwyd y Jubili they were placed all together in sequence following the final page of the December 1846 issue, and the same procedure has been followed for this translation.

The six issues of 1846 and the twelve for 1848 have their own title pages, forewords, and tables of contents. The twelve issues for 1847, however, do not. Because the January 1847 issue begins with page 5, it is evident that the editor intended to produce a title page, a foreword, and a table of contents for that year, but none of the extant volumes of Prophwyd y Jubili has these items for 1847.

My own fascination with Prophwyd y Jubili began nearly twenty-five years ago when I obtained a copy of all thirty issues from a friend who knew of my interest in my great-great grandfather, Captain Dan Jones. At about this same time I read in the Millennial Star concerning the conversion of William Howells, a lay Baptist minister in Aberdare. After reading a publication of Dan Jones in late 1847, Howells walked the four miles from Aberdare to Merthyr Tydfil to seek out the author and request baptism at his hands. On the evening of 2 November 1847 following his conversation with Dan Jones, his first with any LDS missionary, Howells was baptized. During the following eighteen months he was instrumental in bringing into the Church nearly one hundred of his family, friends, and former parishioners. In July 1849 he became the first LDS missionary to France. (See my “William Howells: First Missionary to France,” in Supporting Saints: Stories of Nineteenth-Century Mormons, edited by Donald Q. Cannon and David J. Whittaker [Salt Lake City, Utah: Bookcraft, 1985], pp. 43–81.)

If the writings of Dan Jones could have such an impact on a person like William Howells, I wanted to know their contents. Consequently, I set about to learn the Welsh language, a process that was greatly enhanced by living in Wales during the first half of 1976. Although it has been laborious and time consuming, I have greatly enjoyed the discovery of every page of Prophwyd y Jubili and the challenge of translating its fascinating contents into English so that others may follow the fortunes of the Latter-day Saints in Wales during the two-and-a-half-year period from July 1846 to December 1848.

Since July 1996 represents the sesquicentennial of the appearance of Volume I, Number 1, of Prophwyd y Jubili, a facsimile edition seemed appropriate. But since Welsh is an unknown tongue among virtually all LDS historians, a facsimile edition would serve little purpose. And a mere translation would lack the appearance and flavor of the original. Thus I decided to prepare this “facsimile translation” to provide the non-Welsh-speaking reader with the contents of this little-known periodical while preserving the look and feel of the Welsh original. I am indebted to many people for their help in preparing the translation; however, the ultimate responsibility for its accuracy rests with me.