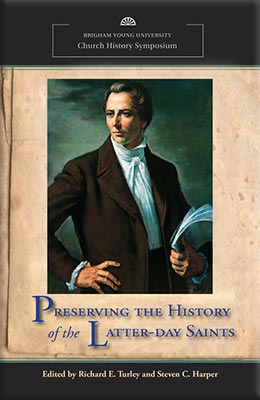 Unlike most religious movements such as Judaism, Islam, Hinduism, and Buddhism, whose origins are somewhat veiled in antiquity, The Church of Jesus Christ of Latter-day Saints developed in a time of modern record keeping. Rather than being obscured by the passage of centuries or millennia, the origins of the church are situated in recent historical time. A written record has been kept at nearly every major step of the church’s organization and growth.

On February 27, 2009, professional historians and students of church history gathered for the fourth annual Brigham Young University Church History Symposium. A cooperative effort between the Religious Studies Center at BYU and the Church History Department in Salt Lake City, the symposium featured presentations on preserving the history of the Latter-day Saints.

Marlin K. Jensen, church historian and recorder of the Church of Jesus Christ of Latter-day Saints, delivered the symposium’s keynote address. Assistant church historian and recorder Richard E. Turley Jr. spoke on the significance of his predecessors in that office. One of those former assistant church historians, James B. Allen, spoke on William Clayton’s influential role in the preservation of the Latter-day Saint past. Other scholars addressed a variety of relevant topics that ranged from the church’s earliest efforts at record keeping to the challenging task of preserving its increasingly global and complex history.

Many of the symposium’s presentations are published in this volume. Readers will find these papers filled not only with research about the church’s past but also the experiences and adventures of many who have taken seriously the commission to preserve the history of the Latter-day Saints.