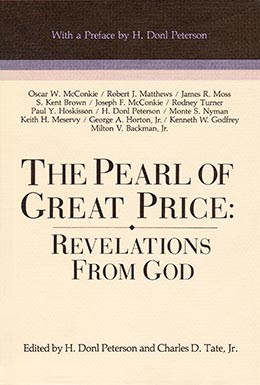 The Pearl of Great Price: Revelations from God

Solomon wisely said, “Of making many books there is no end; and much study is a weariness of the flesh” (Ecc. 12:12). Israel’s king made that astute observation nearly three thousand years ago when scribes labored over clay tablets, animal skins, papyri and plates of metal to preserve the important records of their day. Today when people enter our large modern libraries housing several million volumes, they are often overwhelmed with the amount of printed material available on nearly every conceivable subject.

If one were to begin reading a book a week at the age of 10 and read one each week until age 70, he would read only 3120 books in his lifetime. With virtually unlimited options available on the literary smorgasbord, one must be very selective in choosing the books to read and to value. Books, like other friends or acquaintances with whom one spends considerable time, have had a pronounced effect on the direction many lives have taken.

The Lord has not left his children without direction relative to assessing the value of the printed word. The Bible, the Book of Mormon, the Doctrine and Covenants, and the Pearl of Great Price are the only four books among the millions of volumes available that have the Lord’s seal of approval on them. He it was who inspired the prophets and historians to speak and record his word, and he it was who carefully preserved the engravings on the Plates of Brass so that they would “retain their brightness,” and not only those plates but “also . . . all the plates which do contain that which is holy writ” (see Alma 37:5). He it was who undoubtedly assigned angels to keep watch over the buried treasures recorded on both metal and papyri to bring them forth at designated moments to inspire a new generation of believers. He it was and is who inspired and still inspires living prophets to act as guardians and interpreters of the holy word. He it was who has raised up and will yet raise up many thousands of missionaries to take his word throughout the world, which desperately needs the direction and the Spirit that accompanies the sacred scriptures.

Although the Pearl of Great Price is the last of the standard works to be canonized by the Church (1880), portions of its writings are about some of the oldest history of the world. And while it is by far the smallest of the four books of scripture, it contains some of the most profound doctrinal statements we have. The Pearl of Great Price contains the two scriptures most frequently quoted by the General authorities in recent General Conferences: (1) the passage on God’s “work and glory” (Moses 1:39) and (2) the marvelous account of Joseph Smith’s first vision when the heavens were again opened to introduce the last dispensation through the boy prophet (JS—H 1:1–20).

On 21–22 March 1986, The Brigham Young University Religious Studies Center sponsored a Symposium on the Pearl of Great Price, at which scholars from the Church Education System presented papers. Selected papers from that symposium make up this volume.

The first chapter contains Oscar W. McConkie, Jr.’s keynote address entitled “Why the Pearl of Great Price.” Brother McConkie, who is an attorney by profession, is also the author of several LDS Church books. Dean of Religious Education at BYU, Robert J. Matthews, perhaps the recognized scholar in the Church on the Joseph Smith Translation of the Bible, spoke on “The Pearl of Great Price Encounters the Modern World—an Appraisal.” Professor James R. Moss wrote about “The Pearl of Great Price and the Conversion Process.” Since the symposium, Professor Moss has been appointed Utah State Superintendent of Public Instruction.

Three excellent doctrinal papers follow: Professor S. Kent Brown treats “Man and Son of Man: Issues of Theology and Christology”; Professor Joseph F. McConkie analyzes the role of the Pearl of Great Price on “The Preparation of Prophets”; and Professor Rodney Turner discusses “The Doctrine of the Firstborn and Only Begotten.”

Dr. Paul Y. Hoskisson studies the controversial topic of “Where was Ur of the Chaldees?” My update on the historical background of the Abrahamic papyri, “Sacred Writings from the Tombs of Egypt,” follows. Professor Monte S. Nyman, Associate Dean of Religious Education, succinctly explains “The Covenant of Abraham” in chapter nine.

Professor Keith H. Meservy shares some excellent insights into the Jewish internal conflicts in Jerusalem prior to its destruction in AD. 70 in “Gadiantonism and the Destruction of Jerusalem.” In chapter twelve, Dr. Kenneth W. Godfrey, northern Utah area coordinator of the Church Education System, discusses “The History of Intelligence in Latter-day Saint Thought,” and in the last chapter Professor Milton V. Backman shares his perceptivity with us in his excellent presentation “Verification of the 1838 Account of the First Vision.”

I want to thank Dean Robert J. Matthews of the Religious Education at BYU for his support of the Center and this symposium, Professor Alan K. Parrish for his assistance in publicizing the symposium, Professors S. Kent Brown and Charles D. Tate, Jr. for their assistance in editing the papers, and our secretaries—Lillian Osborne, Janiel Lind, and Charlotte Pollard—for their great help in preparing the manuscripts for publication in this volume.