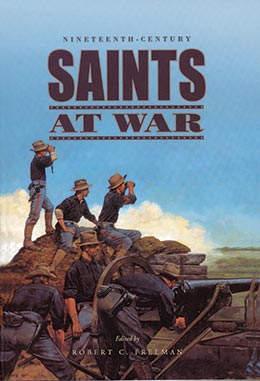 Introduction to the Mexican-American War

“I believe it to be a war of pretexts, a war in which the true motive is not distinctly avowed, but in which pretenses, afterthoughts, evasions and other methods are employed to put a case before the community which is not the true case.”

Interpretations concerning the causes of the Mexican-American War vary. Simply stated, a dictatorial centralist government in Mexico began the war in response to the United States’ annexation of Texas, land that Mexico continued to claim despite the establishment of the independent Republic of Texas ten years before. Despite the many interpretations of its causes, the war resulted in new boundaries and new territories that reshaped the United States and Mexico forever.

At the onset of the war, Mexico had an unstable government. In December 1844, a coalition of moderates and Federalists forced the dictator Antonio Lopez de Santa Anna into exile and elected Jose Joaquin Herrera as acting president of Mexico. The Federalist victory was short and peace was uneasy. Although Santa Anna was exiled to Cuba, other centralists began planning the overthrow of Herrera. With Mexico’s internal strife, the annexation of Texas in 1845 fueled the conflict. The principal factor leading to the annexation of Texas was Britain’s interest in an independent Texas.

Rather than resorting to an immediate declaration of war, as had been the promise of his predecessor, Herrera hoped for a negotiated settlement to the conflict. Then, fearing American patience was running short in negotiations over Texas, Herrera determined to settle the issue. He requested that the United States send an envoy to Mexico; President Polk appointed John Slidell. Slidell was authorized to purchase California and New Mexico from Mexico and to settle the Texas boundary. While the Republic of Texas had claimed the Rio Grande as its boundary, the adjacent Mexican state of Tamaulipas claimed the area north of the Rio Grande to the Nueces River as the boundary.

By the time Slidell arrived in Mexico in December 1845, it was too late. The Herrera government was under intense fire from the centralists. Herrera refused to meet with Slidell, and a few days later centralist leader Mariano Parades y Arrillaga issued a revolutionary manifesto and entered Mexico City at the head of an army. Herrera fled and Parades assumed the presidency. After Slidell’s failure, Polk ordered Zachary Taylor to move his army to the mouth of the Rio Grande and to prepare to defend Texas from invasion.

For the centralists in Mexico, the annexation of Texas had been sufficient cause for war; they saw no disputed boundary—Mexico owned all of Texas. Before Taylor had moved to the Rio Grande, Parades had begun mobilizing troops. On April 23, Mexico declared war on the United States. On April 25, Mexican troops crossed the Rio Grande and ambushed a detachment of American dragoons commanded by Captain Seth B. Thornton. On May 11, Polk presented his war message to Congress, and two days later, despite abolitionist opposition, the U.S. Congress declared war on Mexico.

Mexican leaders had expected a relatively easy victory over the United States. Parades had spoken grandly of occupying New Orleans and Mobile. His army was four to six times the size of the U.S. army. Also, Mexican troops were well armed, disciplined, and, above all, experienced in revolutions.

At that time, American strength at the Rio Grande had risen to nearly twenty thousand troops, the majority of which were volunteers. Despite the troop mass, Americans were susceptible to subtropical diseases and struggled to maintain sanitary conditions in camps. Dysentery, fevers, and general debility spread through the camps. The mortality rate from sickness was staggering.

As the war continued, the centralist government became weaker until it collapsed. Rather than unite Mexico, the war had given the Federalist faction an opportunity to rebel. Taylor had been in contact with the Federalist faction in the fall of 1845. The Federalist leaders asked for assistance in ousting Parades and promised the Americans supplies in return.

In July 1846, Parades went into hiding, leaving his vice president in command. Soon after, the centralists’ government fell apart completely upon the resignation of the vice president, and the Federalists restored the constitution of 1824. In the meantime, Santa Anna had returned to Mexico, where he was appointed head of the Mexican army and in December was elected president by the Mexican Congress. While Santa Anna gained control of the Mexican army, Taylor began his advance on Monterrey. After bloody fighting at Monterrey, the Mexican general Pedro de Ampudia requested a truce. On September 25, he was permitted to withdraw his forces from the city, and an eight-week armistice began.

In January 1847, Santa Anna traveled north with about twenty thousand men to repel Zachary Taylor’s troops. Word of Santa Anna’s approach reached Taylor on February 21. Although outnumbered almost three to one, Taylor took up a position at the hacienda of Buena Vista, a few miles from Saltillo. The Mexican troops forced the Americans to abandon important defensive positions and nearly overcame the U.S. troops. However, a salient charge led by Colonel Jefferson Davis and a resolute artillery advance under Captain Braxton Bragg saved the day for the Americans. Santa Anna withdrew that night and moved south to intercept Scott’s invasion force. The American advance from Veracruz to Mexico City was the decisive campaign of the war. It began with an army of approximately twelve thousand, which was transported by sea to a beach about three miles south of Veracruz. Scott had successfully surrounded the city by March 15 and launched a combined naval and land attack on March 22. Heavy shelling from navy guns forced the almost impenetrable town to surrender six days later.

Almost immediately after the surrender, the Americans began to advance toward Mexico City. Only sporadic resistance was encountered until his army reached the village of Cerro Gordo, where Santa Anna had prepared to make the Americans retreat. The attack on Cerro Gordo was led by units under William J. Worth. Robert E. Lee, George B. McClellan, and Joseph E. Johnston. P. G. T. Beauregard helped find a trail that enabled the Americans to envelop and rout Santa Anna’s forces, thus winning the battle for the United States.

During June and July, Santa Anna anxiously prepared to defend Mexico City. On August 7, the Americans began their advance from Puebla. The first heavy fighting occurred at Contreras, just outside Mexico City. Santa Anna fell back to Churubusco, where he took up a defensive position in a convent. The Americans followed and soon forced them to surrender. However, Santa Anna and much of his command escaped. After an unsuccessful last effort to defend the city, Santa Anna evacuated his troops and the war was over. Sadly, Mexican War veterans continued to suffer from the debilitating diseases contracted during the campaigns, and many died soon after the conflict.